Tehachapi is a one-time railroad stop, 4,000 feet in the high mountain desert near Mojave, California.  Trains don’t stop there very often these days, but multi-engined, two-mile-long bearers of cargo and commerce run over the tracks 50 times a day, making the long haul toward Bakersfield or Mojave. 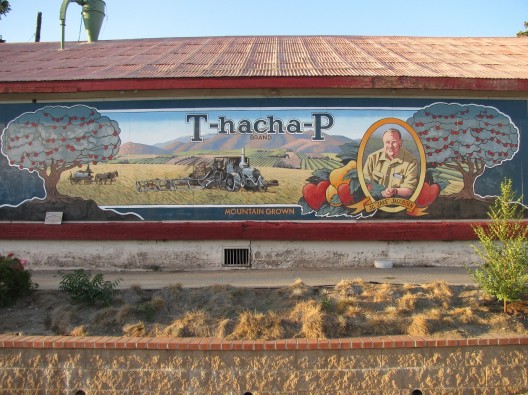 How you more or less pronounce the town’s name

Hawley Bowlus helped build the Spirit of St. Louis and later taught the Lindberghs to fly sailplanes, with some lessons taking place in the high desert air above Tehachapi.  Today, the once bare hills are covered with over 5,000 wind turbines, their giant rotors pointed into the prevailing westerlies.  At the base of these hills, Mountain Valley Soaring has a base, and Jeff Byard has a hangar that hosts the annual meeting of the Experimental Soaring Association. Members gather to hear talks on the history, technology, and joy of soaring – and get in some flying between – or instead of – lectures . 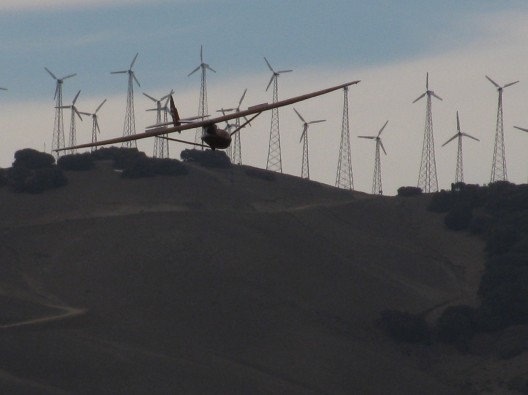 Jeff Byard, bringing his Baby Bowlus in for a landing in front of Tehachapi’s huge wind farm

This year, the Labor Day weekend centered on small sailplanes, with much about craft designed by Irv Culver, a Lockheed aeronautical engineer as famous for his work on P-38s and SR-71s as for his design of soaring vehicles.  One of his early sailplane designs was the “Screaming Weiner,” a design that aside from its elliptical wing planform and  rounded wingtips, would look at home on a modern flight line.  The Soaring Society of America’s sailplane directory highlights its design and  contest career.  “The Screaming Wiener, designed in 1938 had its size determined by the length of the garage workshop in which it was built. The result was a maneuverable ship that could circle in tight thermals and have enough penetration to speed to the next one. Ray Parker flew the Wiener to second place in the 1946 U.S. Nationals. Paul MacCready placed second with it in the 1947 U.S. Nationals and set a world Out & Return record in the process. It was subsequently acquired by Wally Wiberg who made a number of detail performance improvements to it and renamed it ‘li’l Dogie’.”  Its 36-foot span would have made it an early Sparrowhawk. 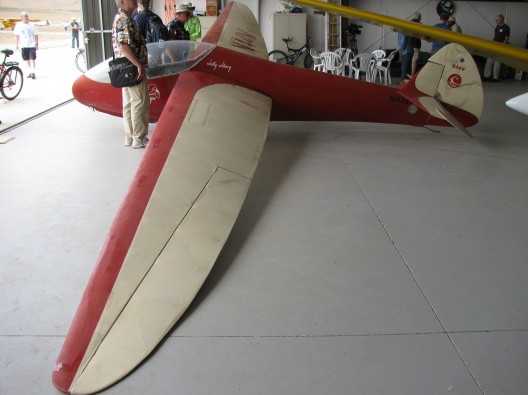 Another element that showed some promise for readers of this blog was the display, discussion and flight of a Silent Electro 2, its nose-mounted motor and folding propeller performing well even in the high density altitude of Mountain Valley Airport.  Gary Osoba told of flying this Italian/Slovenian vehicle and recharging it at an average cost of 56 cents.  For those used to $100 tows to altitude, the high initial cost of the Electro suddenly seemed less daunting. 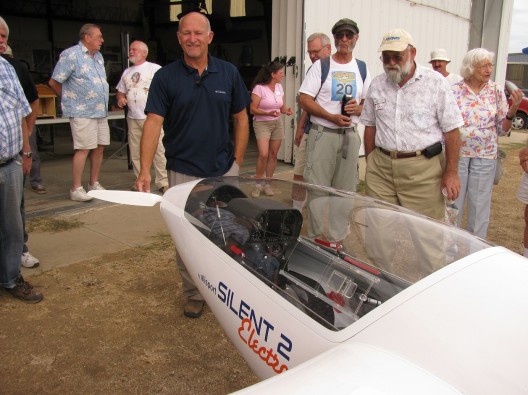 Gary Osoba showing off the folding propeller on the Silent Electro 2. He reports getting 600 feet per minute climb on one meter blades

Peter Buck told of his work on the Monnett Sonex Waiex, testing the electric motor that Monnet and company designed, and resolving problems involved in developing these new powerplants.  Buck has embarked on defining and eliminating those issues, and is working toward having his own aerobatic craft that plays well with electric power’s limitations.  He wants a tossable airplane that can take him for a 20-minute aerial exercise every morning, land, taxi to the hangar, and recharge for the following day’s enjoyment. 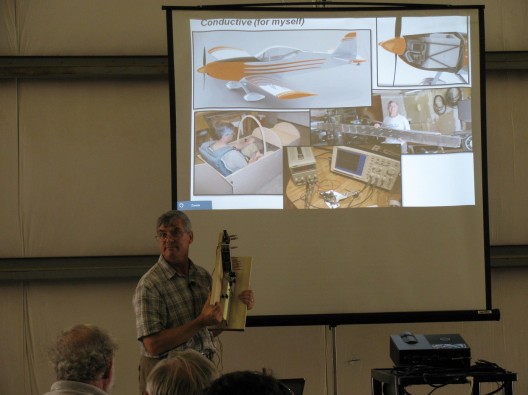 Peter Buck giving a hint of his current project 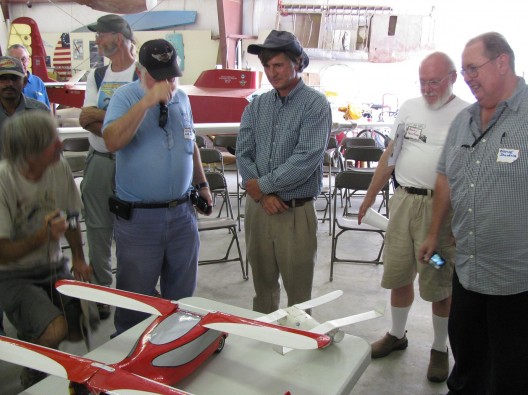 Taras Kiceniuk, Jr. shows off his concept for a roadable car, with wings folding on top like surfboards for road trips

Carl Rankin of Flying Puppets held forth showing kids how to make flying models out of almost anything.  Check out the web site to see some amazing, fantasy-like creations that fly remarkably well. 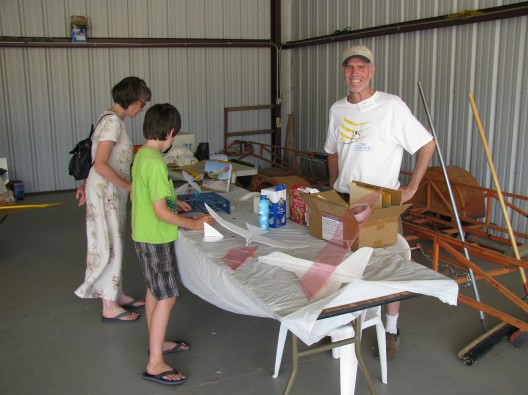 An unsung hero, Carl Rankin teaches young attendees how to make flying models out of almost anything, including soda straws, Saran Wrap, and take-out food containers – truly in the “experimental” category

Although there was not one on hand to view, several speakers spoke of the virtues of the Woodstock, another design in which Irv Culver had a part.  Another small airplane, it was designed to be built in a two-car garage with simple tools and no more skills than a pair of motivated teenagers could manifest.  Small size, simple design and economical construction may indeed be a way to rebuild private aviation.   Jerry Gross, for one, provided a run-down on his project. 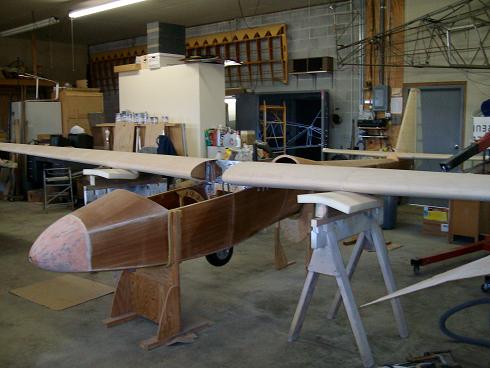 Your editor thinks that seeing the historical spectrum of design, from the Baby Bowlus in flight to the Silent Electro, shows that usable performance can be attained with compact, and therefore more affordable, aircraft.  Such diminutive sizes allow smaller, lighter powerplants, and soaring capabilities enable long trips with smaller battery packs.