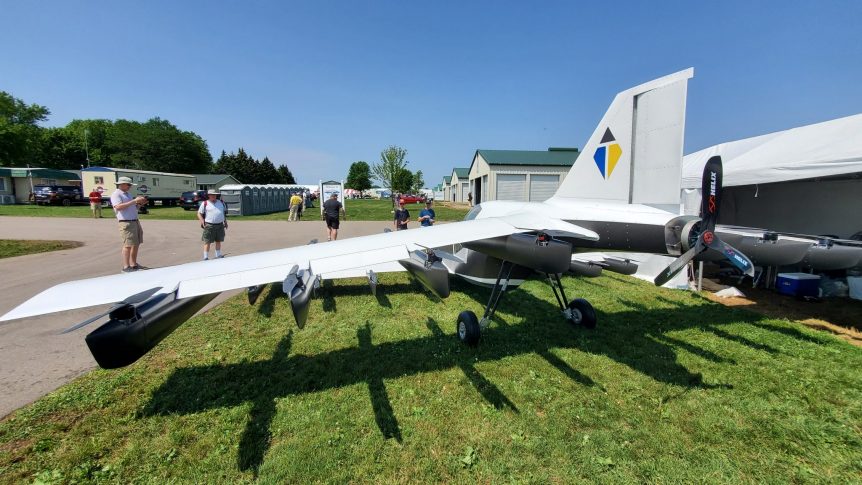 The TeTra Mk. 5 is obviously not the first of its kind.  A little history shows its origins in the Boeing GoFly completion – in which the team won a $100,000 “Disruptor” prize from Pratt & Whitney, the long-time engine makers.

As stunning, and confusing, the appearance of their GoFly entry was, it did not prepare your editor for the 32-rotor (plus pusher propeller) single-seater shown flying in California recently.

They flew SN2 of the Mk. 5 model in unpiloted mode, and will begin sales with serial number 3 at a yet unannounced price.  One can speculate, though.  Model aircraft motors such as the Hacker Q-100 cost 999 euros (about $1,163.00) each.  (The makers have cleverly taped over the maker’s name on close-ups of the Oshkosh display model.)  Even a lower-budget Chinese motor will cost around $500 each.  An appropriate electronic speed controller (ESC) will be about half that of the motor.  The 32-inch diameter carbon-fiber propellers would cost at least $60 each.  At retail prices, that’s $31,968 for high-grade motors, $16,000 for controllers, and $1,920 for propellers.  The lift system alone adds up to $49,888, plus the approximately $7,500 for the (MGM-Compro?) pusher motor, controller and three-bladed Helix propeller.

The 13.5 kilowatt-hour battery pack adds another $1,849 at the current $137 per kW-hr pricing that seems close to an industry standard.  Your editor guesses it will be more as part of an aviation package because it will need a battery management system (BMS), on-board charger or hookup and associated hardware.

Combining triple-redundant motor and fly-by-wire flight controls with four redundant elevons (elevator plus aileron) pairs, the pilot can trust his or her commands will be carried out with some assurance.

SN2, and probably SN3 onwards have aluminum, and carbon fiber reinforced plastic construction (CFRP) and a CFRP/aramid fiber (such as Kevlar) “crumple” cabin.  The machine has an unspecified glide ratio, but a ballistic parachute to arrest things just in case.

It’s a good thing the triple-redundant control system is on board to keep the 32 motors under a tight rein, and to watch over whatever additional features will come in the future.

For a longer interview with some of the airplane’s principle developers, this goes into the background and many details.