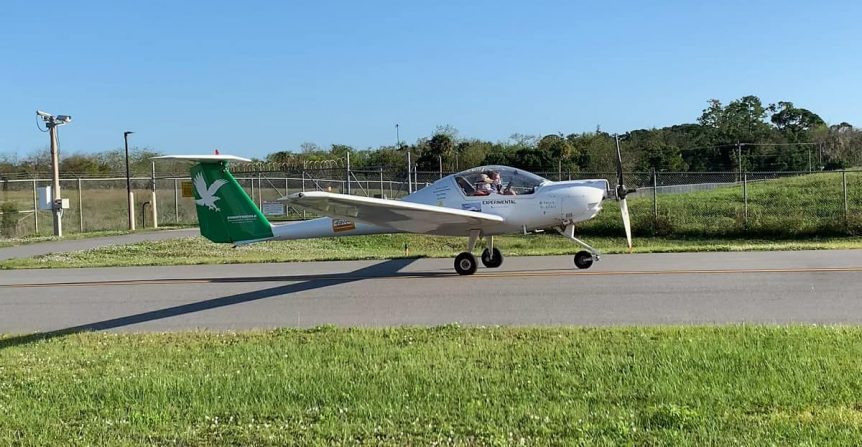 We reported in the blog four years ago that Embry Riddle Aeronautical University not only displayed their eSpirit of St. Louis at AirVenture that year, but ran the motor for the crowd.  The crowd included Federal Aviation Administrator Michael Huerta, who sat in the cockpit during the runup.

The eSpirit of St. Louis

A product of Embry-Riddle, eSpirit is finally making its presence on the taxiway known.  Kelly Pratt, writing in the Embry Riddle Aeronautical News, reports, “After nearly four years of perseverance, the Eagle Flight Research Center (EFRC) team at Embry-Riddle is celebrating a milestone in its electric propulsion research: its Diamond HK-36 completed a successful taxi test exclusively on electrical power at the Daytona Beach International Airport.”

Erik Lindbergh, grandson of Charles, has been a guiding factor in eSpirit’s development, and the airplane reflects his grandfather’s “notion of balance between aviation and the environment.”

The quarter-mile on the taxiway may seem like a short trip, but student Sanay Satam sees it as a prelude to bigger things.  An Aerospace Engineering Master’s candidate, he explains, “I am ecstatic that we achieved this taxi milestone and look forward to our next milestone – flight – an arduous task, but not an impossible one.  We know the challenges that stand before us and are motivated to overcome them. It is all about the high fives at the end of the day, knowing that we were able to achieve our goals, thus fueling, or should I say, electrifying our ambition to succeed in the flight phase.”

The Diamond HK-36 test vehicle was donated by Lockheed Martin Skunk Works, and is part of an ongoing series of hybrid and electric aircraft developments by faculty and students.  In 2011, for instance, ERAU managed to field a hybrid adaptation of the Eco-Eagle S10 Stemme motorglider in the 2011 NASA Green Flight Challenge sponsored by Google.

Despite being fourth out of four competitors that managed to make it to the starting line, ERAU’s team acquitted itself well.  Because liability considerations allowed only the pilot in the cockpit, the Eco-Eagle had a low score because the final results were based on passenger miles per gallon.  The fact that they managed to get an airplane to California from Florida and still fly in the competition was something nine other entrants, mostly professional, did not.  That’s how high the bar was at that time.

Since then, Embry Riddle has been busy with serial and parallel hybrid configurations.  One result is their Heurobotics electric Vertical Take Off and Landing (eVTOL) machine.  The carbon fiber flying wing can lift up to 115 pounds.

From the Green Flight Challenge on, EFRC lists at least five electric projects: 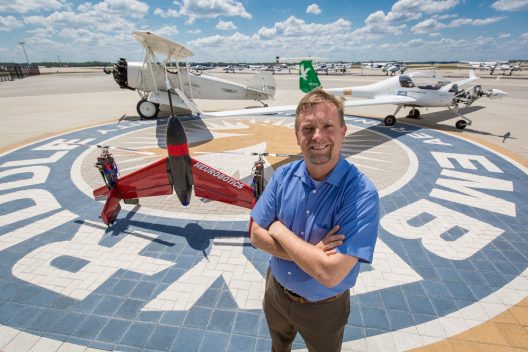 Professor of Aerospace Engineering Dr. Richard P. Anderson, stands with the past and future of flight: the WACO, Heurobotics Mark 2 UAV, and the Eco-Eagle eSpirit of St. Louis at Embry-Riddle Aeronautical University in Daytona Beach, March 29, 2017. (Embry-Riddle/David Massey)

Embry Riddle notes, “The technology employed for the eSpirit’s electric motor and inverter is currently used in the automotive industry, [but] the EFRC designed its own battery packs for the aircraft.   These are configured to allow the packs, “To conform to irregular and small spaces.”

Dr. Kyle Collins, a research assistant professor at the EFRC, explains other factors in play.  “Battery weight is the critical factor when it comes to designing electric aircraft battery packs. To achieve this, the batteries operate near maximum performance and, as a result, generate heat. Care must be taken to design battery packs that can be cooled.” 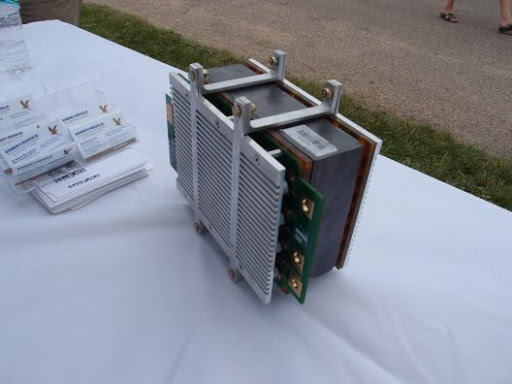 First generation packs used in the taxi test will be replaced by a bonded cell, liquid-cooled pack, the product of new equipment and research.

Theimer noted, “As advancements are made with battery energy density, the application of using electric motors for aircraft propulsion becomes more practical. Carbon emissions, noise pollution, and alternate forms of urban mobility will all benefit,.  Gaining experience with this equipment and in this field is very beneficial at the undergraduate level, to be able to take that experience to the industry and apply it towards something that will eventually be used worldwide.”  These new packs will power the fully-electric eSpirit in the future.