Two Swiss students, David Braig and Thomas Hewel at the ZHAW Zurich University of Applied Sciences, have adapted a pair of small electric motors to the Archaeopteryx ultralight hang glider.

A Swiss, high-end product by Ruppert Composite GmbH Hittenberg, the motorless version has recently achieved a flight of 407 kilometers (252.3 miles) from a foot-launched start! 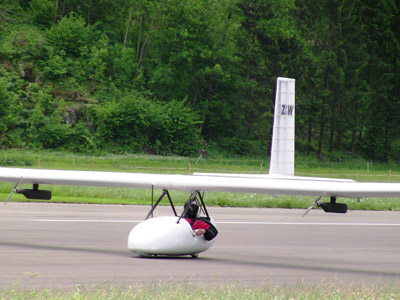 Braig and Hewel, probably realizing that not all locales provide mountain peaks from which to hop off, developed a simple, detachable system to allow self-launching from flat terrain. The system has two carbon fiber wing “I-pods” that hold the motor, aluminum motor mounts and batteries, and an “E-box” in the cockpit, with cables connecting the elements. Total weight is 16.6 kilograms (36.52 pounds), which is a significant boost in the normal airplane empty weight of 54 kilos (118.8 pounds). One writer noted that the 100,000 Euro cost for the airplane meant a price over $1,000 per pound – high end indeed. 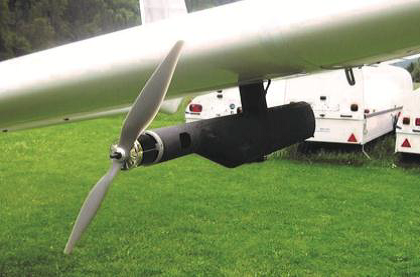 You get what you pay for, though, with performance in a realm not realizable with more conventional sailplanes. The web site for the Online Competition, a web-based soaring contest, in which participants download datalogger information to compare their flights with other, worldwide participants, reports on the characteristics that make Archaeopteryx unique.

“[It can] climb even in the smallest thermals [and] is controlled aerodynamically with a side stick, rudder pedals and flaps.” The ultralight can fly as slowly as 30 kilometers per hour (18.6 mph) and as high as 130 km/hr (80.6 mph), a 4.33:1 speed range. The plane’s maneuverability at low speeds allows a turning radius of 15 meters (48 feet), enabling it to “core” the smallest of thermals. 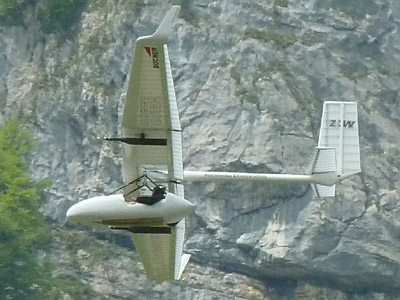 Material costs for the underwing pods and power control system amounted to 13,816 Swiss Francs, about $14,100. Well tested prior to its first flight, the motors were shown to put out 2.85 kW (3.8 horsepower) at an efficiency of 80 percent, somewhat low compared to other model-sized motors. Each motor could produce 100 Newtons, about 22 pounds of thrust. The airplane’s light weight and clean design allowed less than eight horsepower and 44 pounds of thrust, combined, to make unassisted takeoffs and a climb rate of one meter per second (192 feet per minute) possible. 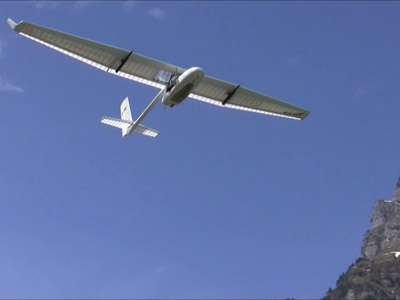 Inflight with less than eight horsepower

The university’s précis of their work concludes, “This is the result of a bachelor thesis by two students from the School of Engineering Winterthur (ZHAW). The clear objective of their thesis was to bring the Archaeopteryx airborne by their electric launch system, in cooperation with Ruppert Composite.  And that worked!“