The Killacycle Racing Team is led by two people, Bill Dube’, designer, builder, and driver of the world’s fastest electric motorcycle, and his wife, Eva Hakansson, crew chief and battery builder for the high-velocity two-wheeler.  Eva’s talk at the fourth Annual Electric Aircraft Symposium in Rohnert Park, California caused several stirs in the audience, and hinted at where battery technology might go in the future. Wanting to free electric vehicles from their “boring and slow” image, Eva seeks to make them “sexy and fast.” 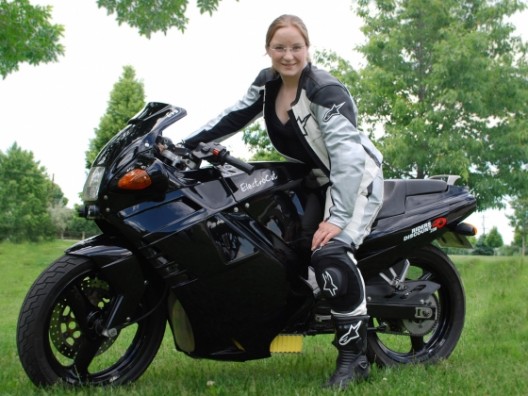 Eva on her Electrocat, built for $10,000 in parts by her father and herself

Pictures of her and Bill’s wedding, in which the bride wore traditional Swedish wedding garb and entered on a motorcycle, the ceremony took place in a motorcycle trailer, and for which both bride and groom wore ceramic wedding rings (necessary to prevent dead shorts while building battery packs and riding the 500 horsepower machine) show the domestic and the purpose-driven lives of both.

Campaigning a high-performance vehicle of any kind, let alone a one-of-a-kind creation such as Killacycle, requires an enormous ability to organize, plan, create, build, and run at the highest performance. Eva’s easy style and willingness to share her knowledge make it look all too easy.

Building the 200-pound, 500 horsepower pack of 1,210 A123 cells requires a meticulous attention to detail and safety. Eva insists that blue painter’s tape and nitrile blue (smurf) gloves are an essential part of the process, the tape separating batteries preventing a “plasma event” which can occur when cells touch; the gloves preventing human interaction in such an event. The two-foot by two-foot by one-foot battery package starts as individual cells to which metal strips are spot welded to connect cells. The rows of batteries are then “layered” into parallel configurations separated by G10, a fiberglass-based dielectric material. Parallel layers are connected at their edges by binder clips, simple office-supply models which have their “lifters” removed when in place. She also has a battery management system (BMS) on each parallel layer to monitor cell condition and prevent meltdowns.   Obviously, safety issues have to be a prime concern in all aspects of electric vehicles, since battery fires can’t be put out, and have to be allowed to burn themselves out.

Testing the limits of credibility, Eva explained that Killacycle’s three-year-old A123 pack (which has never had even a failed cell in all that time), is being replaced by a new pack of A123 “F1” cells used in the hybrid KERS (kinetic energy recovery systems) that provide an additional power boost for 6.67 seconds of every lap of a Formula 1 racer. Although Eva could not say directly what the power output of the new cells is, she was able to reference GreenCarCongress.com’s interview with A-123 co-founder Ric Fulop: “The KERS unit used by McLaren features custom lithium-ion power cells developed by A123 systems that offer more than 20,000 W/kg (Watts/kilogram).”  This intense power density probably has an intense price, and Eva cautions that we should not expect much better in the near future than the 3,500 W/kg available in high power cells that Killacycle has in common with cordless power tools.

While the F1 cells will drop 150 pounds from Killacycle’s battery weight and reduce the size of the pack considerably, they offer a tantalizing glimpse of what could be commercially available to aircraft designers. As with so much of aircraft design, the big question remains, When? 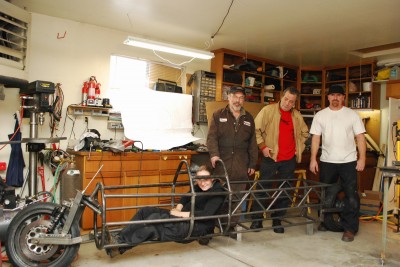 Eva in the tight confines of Killajoule

Eva finished with a request for expert assistance on several aspects of her current project, Killajoule.  This streamlined two-wheeler will attempt a record run of 400 mph in the next few years.  Eva and Bill would like knowledgeable help on wing leveler systems, roll stability, aerodynamics, composites, and speed brakes.  She was surrounded at the conclusion of her talk by willing volunteers.