Ruppert Composite has been flying the up-market Archaeopteryx for the last several years, with pilots hopping off hills in the highly efficient, advanced hang glider. Archaeopteryx is versatile, as shown in the video, and can be launched and retrieved in a variety of ways. Its 54 kilogram empty weight makes quite a load for even a fit enthusiast, though, and waiting around for a tow car or plane dampens even the most ardent longing to fly.

To counter those objections Ruppert has designed a special electric drive. Working with Dr. Martin Hepperle, a well-known aerodynamicist specializing in model aircraft and low-Reynolds number flight; Leomotion, manufacturer of model airplane electric motors – some with internal planetary propeller speed reduction systems; and Flytec, maker of an electric motor found on hang gliders, electric paramotors and ultralight aircraft around the world, Ruppert will introduce the e-Archaeopteryx with “ascent aid” in early 2013.

This is a cleaner installation than that chronicled a few months ago in this blog, and reflects the high quality one would expect from Ruppert. 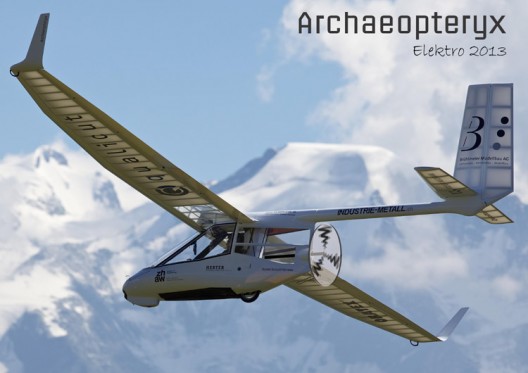 “Ascent Aid” fits neatly into Archaeopteryx and can be easily installed or removed.   Motor would seem to be mounted just behind pilot, with shaft drive to propeller.

The motor and batteries can also be retrofitted to existing machines. Weighing 20 to 24 kilograms (44 to 52.8 pounds), depending on batteries, the system will enable a climb rate of two meters per second (384 feet per minute). The motor package can be removed easily, allowing the airplane to revert to pure soaring form. Ruppert explains this adaptability: “Only a few parts remain permanently installed in the airplane, the remaining extra weight in the glider is correspondingly low.”

A specially-designed folding propeller’s vortex remains under the tail, and when powered off and folded, adds little drag to the fuselage wake, while the added weight might have a positive effect on the airplane’s penetration in soaring.

Prices for the motor package and delivery schedules will be announced in early 2013.