A French biochemist, Pierre Calleja, has devised a lamp that absorbs CO2 for its energy source, and which could clean up city streets while throwing a verdant light on them. A few are in use, but the unit is not yet ready for widespread installation. The “big screen” lamp shown in the video, 1.5 cubic meters (53 cubic feet) in volume, could absorb as much as a ton of carbon from the air every year – the same amount absorbed by 150 to 200 trees.

The large tank is filled with algae, more often used to create biofuels, but used directly here to make light. Calleja envisions using such lamps on streets, or as shown, in underground parking garages, where a green, but clean, glow would be a welcome relief from the smog-filled darkness.

Mike Thompson, an arts graduate from Design Academy in Eindhoven has something similar, the Latro Algae Lamp, inspired by “research conducted by Yansei and Stanford University scientists that concluded that algal cells can draw electrical current through photosynthesis.” Pouring water into the lamp, breathing into the bong-like pipe at the top (your editor has been told about such things) and exposing the lamp to sunlight cause its cells to begin making energy, used when outside light drops below a certain level. 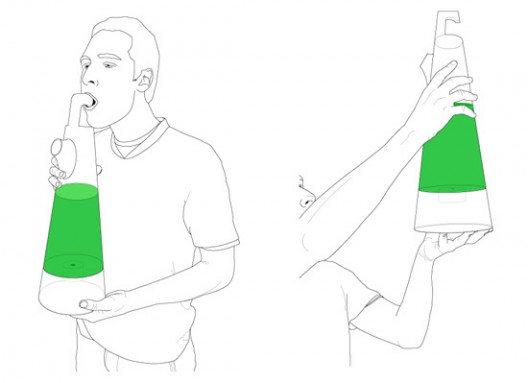 Such direct conversions of photosynthesis show that there are amazing approaches still waiting to be discovered.