How economically can we fly, even with current technology? In its second year, the Green Speed Cup is an attempt to answer that question, provide some sporting competition and allow scientific research into the manner in which the greenest aircraft operate.

Organizer Stemme’s newsletter explains the GSC, “Is a competition for any kind of two-seated aircraft. The target of the GSC is to fly as fast as possible while minimizing the consumption of fossil fuel energy. It is a direct comparison of technologies, machines, materials and the capabilities of the pilots.

“The competition should help to find new ways and practical solutions for saving energy during powered flights. The aircraft that flies with the best ratio of fuel-consumption per distance and speed will win the competition.

“The GSC also provides a database for scientific research for fuel efficient flying, done by the University of Dresden, Germany. So the GSC is challenge and fun for the pilots and a contribution to science.” 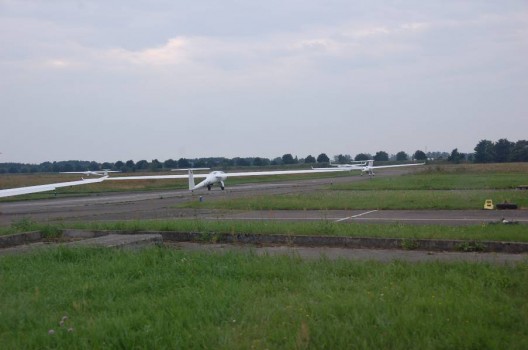 In the first day’s flying on Sunday, August 4, competitors lined up for takeoff to tackle a 287-kilometer (178 miles) run from Strausberg and around three other cities on their “round-robin” trek. Markus Scherdel averaged 181 kilometers per hour (112 mph), with his Stemme S10VT consuming only 4.22 liters per 100 kilometers (55.74 mpg or 111.48 passenger miles per gallon). Your editor’s calculations show that the airplane burned only 12.11 liters (3.2 gallons) of fuel for the flight.

Markus, test pilot for the Solar Impulse, has learned skills to extract the greatest performance from the least energy, making him a hard person to beat in this type of competition. He took 1,000 points for first place, and by comparison, Wolfgang Uhlig, flying another S10VT, managed 154.42 km/hr and 4.43 l/100 km (95.75 mph and 53.1 mpg), garnering 813 points. The event gives a full score to the winner, with all others being graded on a speed/fuel consumption curve. 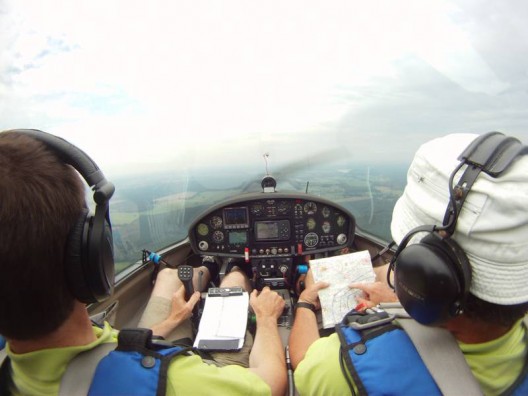 Compare the efficiency, about equal to a Prius but at twice the speed. The Green Flight Challenge winner obtained the equivalent of 403.5 passenger miles per gallon at roughly the same speed – but in a purpose-built airplane, meant only to win that contest. These are “real-world” aircraft that readers can buy and which don’t require specialized skills. Learning to fly them as efficiently as the pilots in this competition, though, might be a life-long pursuit.

A single-seat ultralight, the Czech SD-1, and the German Arcus electric motorglider were not able to compete in the first day’s flight. It will be interesting to see what they will add to Monday’s mix.