JoeBen Bevirt is an extraordinary individual – and that’s no hyperbole.  Creating a lucrative underpinning with his line of knobby, infinitely-adjustable tripods, cell-phone and iPad™ holders, and LED lights, he has expanded into designing giant kites to fly into upper-atmosphere winds and generate high-output electricity.

To loft these kites, he has created a line of motors with the aid of Diederik Marius, shown on the Joby Motors web site, and so far include two versions each of the JM1S and JM2S.  Each can be configured with different windings for different applications. 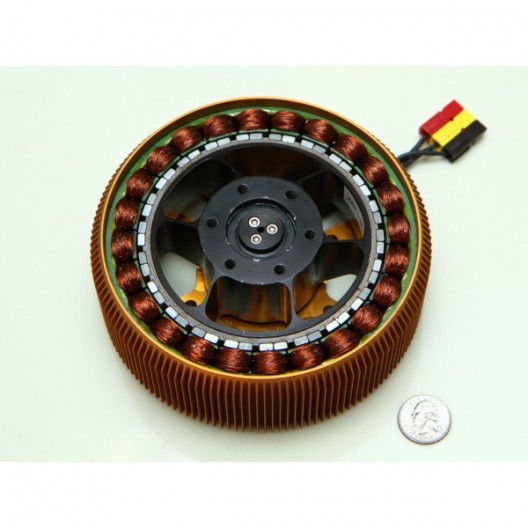 The JM1S weighs 1.8 kilograms (3.96 pounds) and can put out 12 kilowatts peak (16 horsepower) at 6,000 rpm.  Diminutive, it is only154 millimeters in diameter (6.06 inches) and 53 mm (2.08 inches) thick.  Although recommended usage includes radio-controlled models, one can see electric ultralight aircraft being designed in enthusiasts’ heads.  Prices are $895 and $955 for the two configurations of the motor.

Both motors feature 10,000-hour dual bearings, a characteristic anodized alloy outer ring (stator) and 22 poles (JM1S) or 46 (JM2S).   Drop the “S” from the designation and each motor becomes a little thicker and heavier, draws a few more Amps, and puts out more power and torque.

With these light, torquey little units available, what’s an intrepid designer to do?  Make a vertical takeoff and landing vehicle to shorten the daily commute – of course!  JoeBen announced his Monarch Personal Air Vehicle (PAV) at this year’s Electric Aircraft Symposium in Santa Rosa, California on April 29 and caught a lot of attention with his animated video of the eight-motor craft levitating, climbing, travelling and landing in a depiction of a perfect commute.

Such technology in the hands of amateur pilots will require a lot of automation (know anyone with an eight-engined multi checkout?) which Joby is capable of managing.  Note the $550 autopilot on their Robotics page.

The prototype is under construction at Windward Performance in Bend, Oregon, with designer Greg Cole making almost everything but the motors and controllers in house (that may explain the resemblance to the SparrowHawk sailplane).  Although JoeBen did not mention pricing in his CAFE talk, an earlier presentation mentioned a price under $30,000, possible with the low cost of the motors and automation available if volume production took off, but obviously not with batteries.  He has also mentioned going 100 miles for a $1.00 recharge.  If that doesn’t get people out of their cars, what will?

One extension of such technology would be the need to revamp our outdated air traffic control system into a more flexible, dynamic entity, all the more reason to hope for JoeBen’s success.