“We are exploring new methods for quick and cost-effective synthesis of two-dimensional materials for rechargeable battery applications,” Singh said. “We are interested in this research because understanding lithium interaction with single-, double- and multiple-layer-thick materials will eventually allow us to design battery electrodes for practical applications. This includes batteries that show improved capacity, efficiency and longer life.”

Researchers grew graphene films on copper and nickel foils in less than 30 minutes by quickly heating them in a furnace in the presence of argon, hydrogen and methane gases – significantly at atmospheric pressure.  Not needing to use a vacuum to create these films saves energy, time and cost, according to Singh.

Researchers used the films to create the negative electrode of a lithium-ion cell and test the charge and discharge characteristics of the battery.  Graphene films grown on copper did not cycle lithium ions “and the battery capacity was negligible.”  Graphene films grown on nickel, though, was able to store and release lithium ions more efficiently.

Singh noted, “We believe that this behavior occurs because sheets of graphene on nickel are relatively thick near the grain boundaries and stacked in a well-defined manner — called Bernal Stacking — which provides multiple sites for easy uptake and release of lithium ions as the battery is discharged and charged.”

Researchers created 10-layer thick tungsten disulfide nanosheets in a second experiment.  The material, used as a dry lubricant in automobiles (and on pinewood derby axles), is a dry powder which the team separated into three-atom-thick sheets in a strong acid solution.

The resulting sheets stored and released lithium ions, but differently from the way the graphene sheets did.  A conversion reaction in the tungsten/lithium ion battery causes the tungsten disulfide to dissociate to form tungsten and lithium sulfide during discharge.  This involves the transfer of at least two electrons per tungsten atom – suggesting more energy transfer than single electron transfers common in lithium cells.

Unfortunately, “We also realize that tungsten disulfide is a heavy compound compared to state-of-the-art graphite used in current lithium-ion batteries,” Singh said. “Therefore tungsten disulfide may not be an ideal electrode material for portable batteries.”

The research appeared in a recent issue of the Journal of Physical Chemistry Letters in an article titled “Synthesis of surface-functionalized WS2 nanosheets and performance as Li-ion battery anodes.”

Because both projects create nanomaterials in a cost-effective way, they may inspire other researchers to attempt graphene or other film production without the added expense of low-pressure chemical processes.  The production of multiple layer films also has an advantage.

“Interestingly, for most applications that involve this kind of battery research and corrosion prevention, films that are a few atoms thick are usually sufficient,” Singh said. “Very high quality large area single-atom-thick films are not a necessity.”

Work was supported by the National Institute of Standards and Technology and the Kansas National Science Foundation Experimental Program to Stimulate Competitive research program.

Singh plans future research to study how these layered nanomaterials can create better electrodes in the form of heterostructures, which are essentially three-dimensional stacked structures involving alternating layers of graphene and tungsten or molybdenum disulfide.

The research appears in the January issue of ACS-Applied Materials and Interfaces in an article titled “Synthesis of graphene films by rapid heating and quenching at ambient pressures and their electrochemical characterization.”

Stacking graphene sheets to gain different properties is the result of a happily accidental discovery at the University of California, Riverside, which found that the electrical properties of graphene can be altered by adopting a technique called Bernal trilayer stacking. 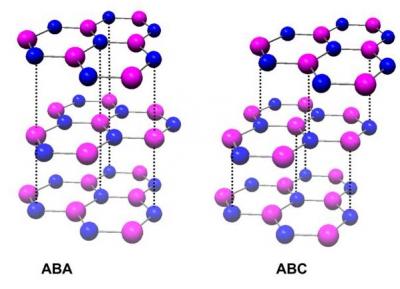 Researchers point out, “Graphene is made up of carbon atoms that are arranged in the shape of hexagonal rings and has high electrical and thermal conductivity, thus making it the ideal material to be used in semiconductors and computers.”

Because graphene sheets have a planar structure, they can easily be stacked upon one another through Bernal stacking, of which there are two types.

“Under regular Bernal stacking the corner of the hexagon formation of the second sheet is placed in the middle of the bottom sheet. Researchers adopted a new method of stacking called the Bernal trilayer stacking where three sheets of graphene were arranged in such a manner that the top sheet is directly below the lowest sheet. It was discovered that devices that had graphene sheets arranged in this way displayed electricity conductivity while the other devices displayed insulation.

“However, if the arrangement was slightly shifted, the sheets displayed insulation. Varying the types of layers and their arrangements should allow researchers to optimize desired characteristics.

This study was sponsored by grants from the Office of Naval Research, the Focus Centre for Functional Engineered Nano Architectonics and the National Science Foundation.”

Increased work with room temperature, ambient pressure and quick heating allows lower energy use to obtain battery materials, certainly an important consideration in getting a net energy gain from these new technologies.