Ken Dawe and Vim Toutenhoofd own a pair of Aeriane Swifts (“Manufactured and Improved by Aeriane since 1993”) powered flying wings they hangar at a small airport outside Newberg, Oregon.  Vim’s has a single-cylinder, two-stroke engine for self-launching and Ken’s has the Eck-Geiger HPD-10, 10-kilowatt motor, controller and battery system, as part of the Icaro 2000 setup designed and sold by Manfred Ruhmer. 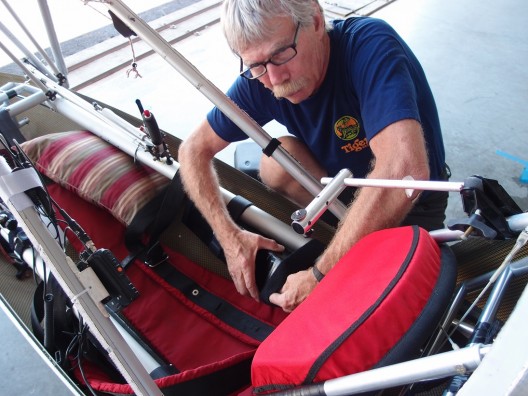 Ken Dawe mounts one of two battery packs. Large tubes on either side of pilot mark the structure’s hang-gliding heritage.  Motor and controller are right behind the pilot, with a shaft driving the pusher propeller 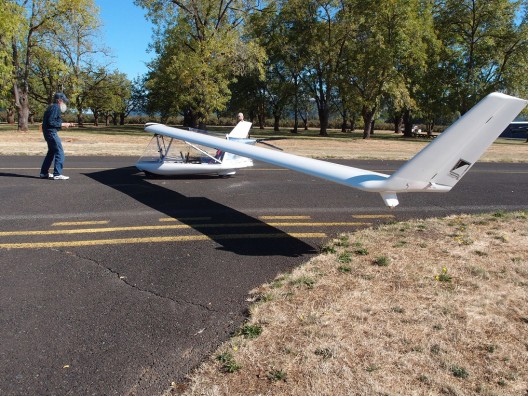 After Vim and Ken studied the videos left by Manfred Ruhmer on charging the batteries and hooking everything up,  and a few frustrating delays (flat tires mainly), Ken was able to start the motor, taxi out and take off.  The craft showed a good rate of climb and full control of the ultralight airplane.  The wing alone weighs around 100 pounds, the pod and electrical components might add another 100, and Ken doesn’t look over 150 pounds.  The 350-pound total takeoff weight seemed to accelerate and climb well on the 13 horsepower available, with the 1.4-meter (4.6-foot) propeller providing plenty of thrust. 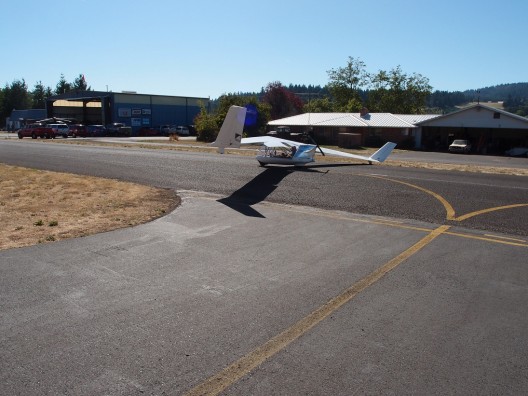 Swift taxiing out for takeoff

A little propeller noise was the only discernible auditory sign of the Swift’s passage, and even that faded by the time the airplane was at the end of the runway.  As it turned and climbed in the distance, it might have been a bird or sailplane, not making any distracting noise to those below. 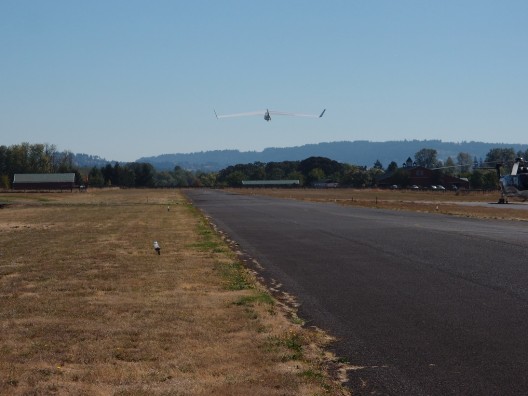 All 13 horsepower pushing the little craft into the blue skies

After about 15 minutes of exploring the local thermals and the handling qualities of the airplane, Ken made a perfect landing, slowing enough to take the turnoff to his and Vim’s hangar.  There was enough juice left in the two battery packs for another go-around, but Ken was being a good test pilot and not pushing the limits on his first time out in a new machine.

Congratulations to Ken and Vim on their successful outing.  Your editor interviewed the first owner of an electric airplane in Oregon five years ago.  Dick Van Grunsven was just starting a successful series of flights with his Lange Antares motorized sailplane.  Tomorrow, if all goes well, your editor may see the third electric airplane to fly in Oregon make a successful test hop.  It’s taken a while, but things are picking up!