Imagine being confronted with a challenge to create an electric airplane in 48 hours, being filmed for much of those two days regardless of the frustrations or successes that come, and knowing that the entire adventure will be shown on the National Geographic Channel. 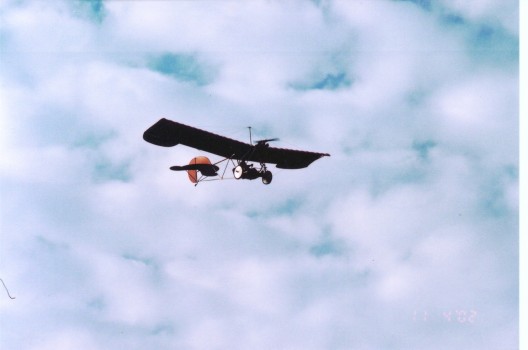 Robert Baslee, who runs Airdrome Aeroplanes in Holden, Missouri,  has the kinds of experience that makes such a challenge plausible.  He built four Nieuport fighters for the movie Flyboys in 52 days with a small, dedicated crew, for instance. His wife and he supplied vintage-looking aircraft to the making of the film Amelia.  He markets a growing range of WWI airplanes in full-size, 75- and 80-percent scale.  A full-scale Bleriot XI replica from his firm crossed the English Channel on the 100th anniversary of Louis Bleriot’s flight.

Dick Starks writes regularly for Kitplanes magazine, and regales readers in the February 2013 issue (on newsstands in early January, with yours truly’s article following Mr. Starks’ – shameless self-promotion at its best) with Baslee’s latest and most electrifying moments.  In his usual breezy style, he shares his philosophy on the nature of rebelliousness and free thinking, both applicable to him and to Baslee.

Imagine that the NatGeo people asked you to strut your stuff in a series on Mad Scientists, with your 48-hour challenge being to build and fly and electric airplane, using nothing more than off-the-shelf parts and spending a sum total of zero.  Baslee met the challenge a bit lop-sidedly, but only because the first motor, an 8600 Watt wind turbine unit, took up smoking during bench testing.  His crew also needed to buy some parts from hardware and auto parts stores, but otherwise found the initial motor, six 12-volt lead-acid batteries, and a motor controller and propeller literally on shelves in Baslee’s shop, and attached these second-hand bits to the Dream Fantasy airplane sequestered in his hangar.  The crew manufactured many pieces from scrap metal, sawing to size and filing to fit, but probably skipping the paint because of time constraints. 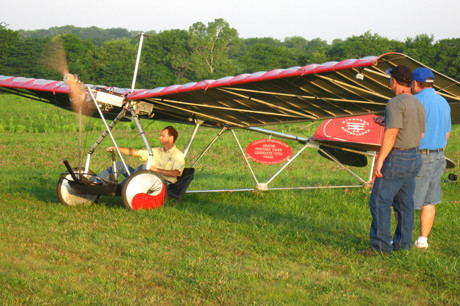 Use of a two-seat ultralight was an inspired choice because of the weight of the lead-acid batteries, with nowhere near the power-to-weight ratio of modern lithium cells.

Baslee commented on the challenge in an email to your editor.  “It was more for the fun of trying than anything else. I know with the high tech components it would be pretty easy to convert our little aircraft.”

With the 48-hours diminishing quickly, the builders and film crew met at 5:30 a. m. to start flying before the heat of the day thwarted power and lift.  A heavy crosswind complicated things. According to Dick Starks’ account, the plane, “Looked like it might have gotten light on the gear,” but the weak batteries and “sagging” motor prevented actual flight.  A second try with fresher batteries didn’t do much better.  While waiting for the wind to die down, Baslee replaced the propeller, charged the batteries fully, and managed a ten-second flight that attained five feet of altitude, all for the grateful cameramen.

The story is better told in Dick’s article and the whole show can be seen on the National Geographic’s video, a small teaser of which can be viewed below.  It at least gives an idea of what kind of man would tackle this challenge.

“John [Bowler – the show’s host] teams up with Robert Baslee, an aeronautics genius who builds full-scale airplanes in his garage and flies them out of his backyard. Robert and John set out to transform one of Robert’s planes to fly on pure electricity in just two days. Along with Bill (the battery guy) and Jim (the Human toolbox), they race against the clock to redesign the plane. After several props and a burned up motor, they have to fly off at sunset to get new materials.  When the crowd arrives at dawn, they have yet to test their invention. And they will only get one chance. It’s all or nothing at sunrise.”