Oliver Garrow, founder, designer, and President of Garrow Aircraft LLC, says it right up front, “My design is completely counterintuitive.”

Pilots are used to counterintuitive thinking.  Push the nose down and add power when you’ve stalled and are heading groundward anyway, for instance.  But the logic of what Garrow is doing becomes apparent only when you see the Verticopter® flying.

Motors can be pivoted on all models, providing vectored thrust that makes the most of the airplane’s unique configuration.  Garrow sees electric power as ideal for this application, and the use of one or multiple motors simplifies the problem of vectoring the thrust to suit the flight condition.

He found that more motors and smaller propellers within the annular opening allow greater flexibility of control than a single large disk.  His current test model has four motors and propellers for thrust, with one smaller unit on one wing tip for roll control and one on the tail for pitch control.  Differential thrust vectoring gives the craft great flexibility in maneuvering, including in yaw.

Expandable to many sizes, Garrow sees his design as fitting the needs of everything a personal air vehicle up to those of a fairly sizeable intra-city commuter liner.

Oliver and his team members are excited by recent progress in expanding their vehicle’s envelope to VTOL operations.  He has been granted the use of the unmanned aerial vehicle (UAV) runway area at Moffett Field, near the famous zeppelin hangars and the NASA Ames Research Center’s iconic wind tunnel.

“Note the custom-built windsock in the background, showing little wind, while this runway is on the seaside (inner bay), so normally quite windy,” Oliver explains. 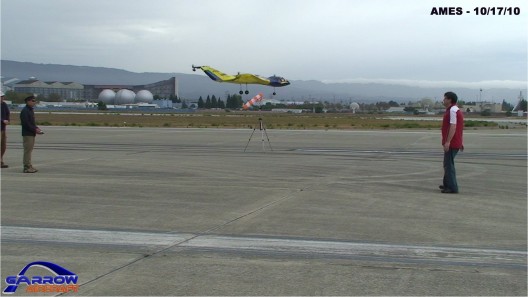 “I attached an exclusive picture taken on the runway at AMES… showing one hover run with Proto37, the two pilots on the left and me in red on the right.”  For now, Garrow needs one pilot to manage the vertical aspects of flight and a second to control the horizontal, but this Outer Limits approach will be replaced by computer-aided single-control simplicity in the actual vehicle.

“Although it was exciting to expand the flight envelope of our proof-of-concept UAV from CTOL to STOL, from STOL to STOVL, the VTOL expansion phase is quite the most rewarding, because of the challenge to balance a 18-lb. craft just on power thrust.”

To keep costs down for his first manned prototype, Oliver is investigating Turnigy motors, giant model aircraft powerplants from China, for motive power.  His latest find is a 21-horsepower, five-pound monster that costs a mere $299. This unit will undergo a full static bench test to determine whether it will withstand the heat of full power, but Oliver sidesteps power overstress by running the motors at only half their full output, thus avoiding the extremes of wear and tear.  While using smaller motors (1,500 Watts per motor capability, but running only 700-800 Watts) on his model prototype, he anticipates mounting something like the Turnigy on his first manned craft.

Oliver claims zero drag from his thrust system, and compares his full aircraft lift-to-drag ratio of 14-18:1 to that of a typical helicopter’s 4:1.  “Let’s distribute weight and thrust in the airplane,” Oliver says, explaining that such distribution of weight, thrust, and ballast allows for optimum trimming of the Verticopter in all flight conditions.

Oliver’s wing is not the first doughnut (read wingbox-less) to fly, the first being the Lee-Richards Annular Monoplane from England in the 1910 era.  But Oliver has certainly developed the concept to a new level of sophistication and potential.  Lee and Richards would have envied electric power and computerized controls.

More details on the concept, project, and the future of Verticopters can be found on the company’s web site.