Solar cells are relatively inefficient at gathering the total range of sunlight’s spectrum that falls on them every day.  Trying to find a way to capture more than a single wavelength or narrow band of the solar light, scientists at Massachusetts Institute of Technology (MIT) and at Peking University in China propose putting a strain on solar cells, creating a spatially varying bandgap that would react to more of the colors in light and thus give off more electricity.  Changing the bandgap in a solar collector’s material enables excitation of electrons from not just visible light, but from energy sources such as infrared radiation. This has the potential to increase the cell’s energy output enormously since most of the sun’s radiation is in invisible form. 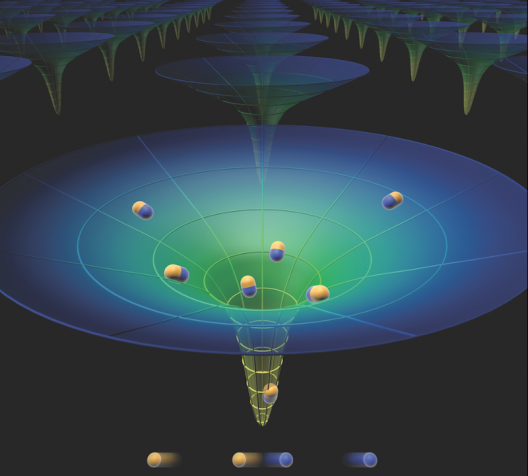 Bandgap is a complex concept, and MIT provides a brief tutorial here.

MIT’s news office reports: “’We’re trying to use elastic strains to produce unprecedented properties,’ says Ju Li, an MIT professor and corresponding author of a paper describing the new solar-funnel concept that was published this week in the journal Nature Photonics.

The “funnel” is a metaphor, MIT explains, but the writer then takes a somewhat opposite stance.   “Electrons and their counterparts, holes — which are split off from atoms by the energy of photons — are driven to the center of the structure by electronic forces, not by gravity as in a household funnel. And yet, as it happens, the material actually does assume the shape of a funnel: It is a stretched sheet of vanishingly thin material, poked down at its center by a microscopic needle that indents the surface and produces a curved, funnel-like shape.”  So, we end up with a metaphorical funnel, but also an actual sheet of material with little funnels poked into its surface.

All those “needles” exert elastic strain on the sheet, and the varying strain “tunes” different parts of the funnels to different wavelengths of light.  The six-angstrom thick MoS2 (molybdenum disulfide) sheet starts as a natural semiconductor.   Researchers explain, “It has a crucial characteristic, known as a bandgap, that allows it to be made into solar cells or integrated circuits. But unlike silicon, now used in most solar cells, placing the film under strain in the ‘solar energy funnel’ configuration causes its bandgap to vary across the surface, so that different parts of it respond to different colors of light.”

In a regular solar cell, electrons displaced by the sun exciting them into motion follow a random path through the cell, making for some inefficiency. In the funnel model, electrons readily find their way to the center of the concentrating funnel.  That expediency, coupled with the varying wavelengths of light displacing more electrons, makes the approach seem highly promising.

Colin Rush, a regular reader and occasional de facto proofreader of the Blog, perhaps whimsically suggests specially-configured sheets of funnel material on the wings of a solar-powered airplane could use the strain imparted by the aircraft’s motion through the air to optimize the cells’ and the airplane’s performance.

The work was done with Ji Feng of Peking University and Cheng-Wei Huang, and was supported by the U.S. National Science Foundation, the U.S. Air Force Office of Scientific Research, and the National Natural Science Foundation of China.  The abstract for their paper, “Strain-engineered artificial atom as a broad-spectrum energy funnel,” can be seen at Nature Photonics.