David L. Chandler of the Massachusetts Institute of Technology (MIT) News Office reports that an MIT research team headed by Jeffrey Grossman has found a way to make sheets that push “towards the ultimate power conversion from a material” for solar power.  His team has managed to fabricate molecule-thick photovoltaic sheets which could pack hundreds of times more power per weight than conventional solar cells.

Senior author of a new paper on the team’s study in Nano Letters, Grossman found that despite the interest in two-dimensional materials such as graphene – only an atom thick – few have studied their potential for solar applications.  Grossman says, “They’re not only OK, but it’s amazing how well they do.” 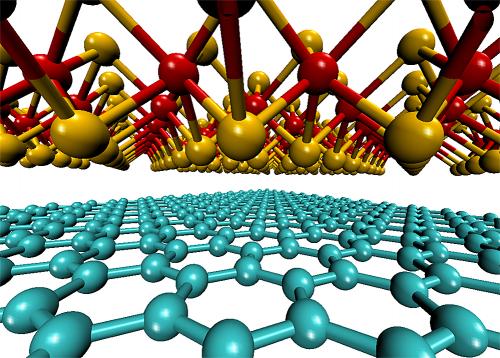 The MIT team found that an effective solar cell could be made from a stack of two one-molecule-thick materials: Graphene (a one-atom-thick sheet of carbon atoms, shown at bottom in blue) and molybdenum disulfide (above, with molybdenum atoms shown in red and sulfur in yellow). The two sheets together are thousands of times thinner than conventional silicon solar cells. Graphic: Jeffrey Grossman and Marco Bernardi

Stacking sheets of graphene and materials such as molybdenum disulfide would make solar cells with one to two percent efficiency in converting sunlight to electricity.  That seems disappointingly low compared to the 15 to 20 percent efficiency of commercially available silicon solar cells.

One nanometer thick, this material is thousands of times thinner and lighter than tissue paper, though, and stacking multiple layers of the tissue-like films would create significant increases in energy collection efficiency.  Postdoctoral candidate Marco Bernardi was lead author on the team’s paper and thinks, “Stacking a few layers could allow for higher efficiency, one that competes with other well-established solar cell technologies.”  Maurizia Palummo, a senior researcher at the University of Rome visiting MIT through the MISTI Italy program, was also a co-author.

Bernardi says that pound for pound, the thin cells could produce up to 1,000 times more power than conventional cells.  Their billionth of a meter thickness is about “20 to 50 times thinner than the thinnest solar cell that can be made today.  You couldn’t make a solar cell any thinner,” according to Grossman.

Because so little material is needed to make such thin stuff, and the costs of materials are far lower than those for silicon cells, these should be low-budget offerings compared to today’s solar panels.  Because the material is relatively stable, it can be used in open-air applications with no need for glass covers such as silicon panels require.

Applications in aircraft use are immediately apparent, although thin sheets that could be applied to other structures such as houses would have many benefits.  MIT says, “About half the cost of today’s panels is in support structures, installation, wiring and control systems, expenses that could be reduced through the use of lighter structures.”

Grossman reflected on the theoretical nature of the work so far, leaving many avenues open to explore.  “There’s a whole zoo of these materials that can be explored. My hope is that this work sets the stage for people to think about these materials in a new way.”  Molybdenum disulfide and molybdenum diselenide are the two-dimensional materials studied so far, but the “zoo” is open.  The team can only speculate at this point on the many other materials available, and the innumerable combinations that could increase efficiency.

As the team moves beyond computer modeling to actually producing working samples of these materials and discovering ways in which they could be produced at a commodity level, the potential for transforming energy collection and applying these breakthroughs to transportation will also transform what our future aircraft will look like and how they will perform.

This work was supported by the MIT Energy Initiative.

(Self-serving Advertisement Warning: Your editor has an article in the July, 2013 issue of Kitplanes magazine called, “The Grand Unified Airplane,” which details how materials science could lead to aircraft that ultimately  take their power from the “very act of flight itself.”  MIT’s work certainly points to one way this could happen.)