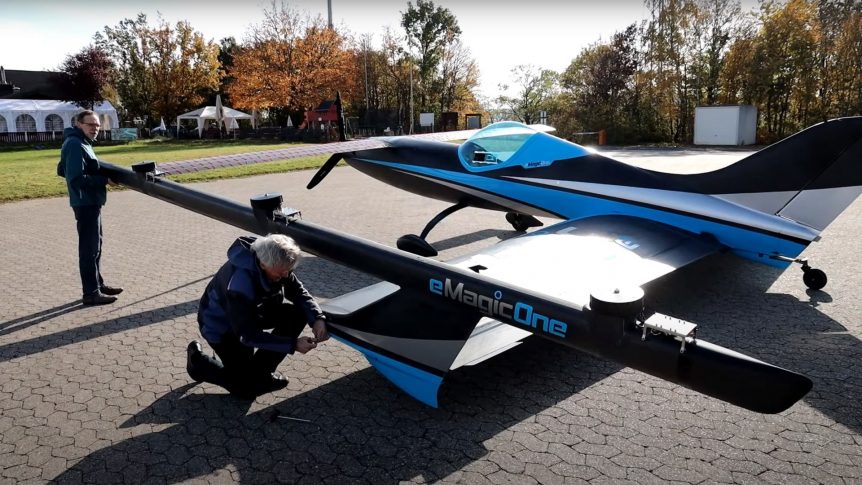 Thomas Senkel was an early part of Volocopter, initially called e-Volo.  His first efforts resulted in a spider-like creation perched on an exercise ball.  It flew, seemed stable, and despite the placement of whirling propeller blades encircling Thomas during his test flights, proved not a hazardous as it looked.

Explanatory material accompanying the video declared, “The first manned flight with an electric vertical take-off and landing multicopter (eVTOL) was performed by Volocopter. The flight lasted 90 seconds, after which the pilot Thomas Senkel stated ‘The flight characteristics are good natured. Without any steering input it would just hover there on the spot.’ The flight, which is a Guinness World Record, was performed on October 21st in 2011.”

Although he helped develop the e-Volo which transfigured into Volocopter variants, Thomas apparently left the company to strike on his own patent-filled adventures.

A Bird in the Canaries

He worked on a variety of electric bikes and trikes, with the most aerial being his Skyrider, seen here electrically reaching a mountain slope and then powering itself in parachute mode.  He worked with Mark Beierele to develop a 20 kW motor for the eGull

IN 2014 the blog reported, “[Mark] Beierle and Senkel first made an 18 kW motor that Mark flew successfully at the Arlington Fly in in 2010, and for several months thereafter.  After 35 hours of testing, however, the motor showed signs of overheating at maximum power.”  The design was upgraded and demonstrated on the eGull as Oshkosh’s AirVenture that year.  That motor produced 30 kW (40.2 hp.)

eMagic One premiered at European Rotors, where Senkel and co-founder Michael Kügelgen displayed it for the first time.  Moritz Pfletschinger, A third founding member, developed the software for the battery management system, pilot assistance system and flight controller optimization.  eMagic has an empty weight of 250 kg (562 pounds) and a maximum takeoff weight of 420 kg (882 pounds).  Thomas claims it will cruise for a full hour at 144 kilometers per hour (90 mph) on a charge of its dual battery packs. He adds that is five times the range a pure multicopter design can manage on the same energy.

Each of the eight lift motors spins at 1,800 rpm and produces 13 kW (15 in the company’s brochure) and 100 kilograms (220 pounds) of thrust.  Each propulsion package weighs “just 5 kg (11 lb) including motor, controller and prop,”  according to New Atlas.  A 40 kW tractor motor and propeller pull eMagic One along at 144 kilometers per hour (90 mph) for an hour with two battery packs.

As we see in the second part of the video, Thomas created a skeletal rig that resembles the aluminum frame he made for the original VC-1 to test the vertical lift component of eMagic One.  Already, he’s demonstrated the ability of the traction motor to nearly levitate the lightly loaded craft after a short takeoff run.  With a wing loading of only 5.8 pounds per square foot (one pound per square foot lighter than a Piper J-3 Cub) eMagic One takes off in a short distance on its parallel wings – which are claimed to be highly stall resistant.  That should aid in transitions from vertical flight to horizontal flight and back.

eMagic’s canopy seems familiar, possibly because it looks just like those on the Silence Twister, a neat single-seat craft powered by Rotax or electric power.  Brothers Matthias and Thomas Strieker head Silence Aircraft GmbH and  Leviora Leichtbaumanufaktur, collaborate on multiple aircraft projects, including the Silence Twister Elektro.  The companies are also working on piloted aerobatic drones, which we will cover soon, and even composite guitars.

A plethora of projects will bear watching in the near future, including the eMagic One, which we hope to see in transition flight soon.