It’s a good week when at least three battery developments show promise for electric vehicle use in the near future.  One advanced lithium-ion battery from France, a dual-carbon battery from Japan, and a supercapacitor that one can wrap around one’s finger comprise the trio.

“Synthesizing nanoparticles of tin dioxide (SnO2) in the pores of a carbonaceous material,” researchers at the Institute of Materials Science of Mulhouse and Charles Gerhardt Institute of Montpellier, part of an electrochemical energy storage consortium called RS2E, have found the material to have “remarkable properties.”  Their work is the subject of a patent and published in the journal, Advanced Energy Materials. 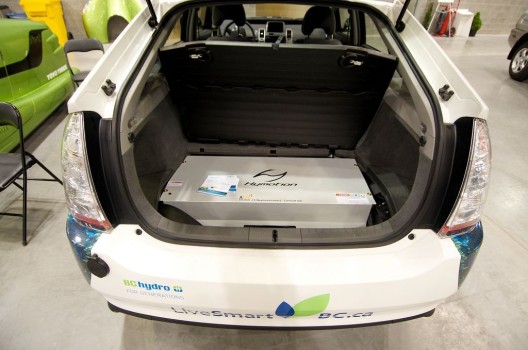 Researchers, hoping to obtain better performance that that achieved with carbon electrodes, tested combinations of nickel (Ni),  iron  (Fe), cobalt (Co), and other materials before hitting on tin dioxide as a material of choice.  All have (theretically) far greater electrochemical storage capacity than graphite, but expand and contract during charging and discharging of the battery, often loosing particles which interfere with ion flow.

The RS2E researchers found that confining two-nanometer-sized particles of tin dioxide in the interconnected pores of a carbon matrix helped improve battery performance with no irritating particle shedding.  Researchers used “carbonaceous precursors respectful of the environment,” which were then reduced and infused into the pores of the carbon.

This homogeneous distribution of tin dioxide within the carbon was “controlled and adjusted to absorb changes in volume of the particles during lithiation (battery charging) and reduce particle agglomeration (dendrites).” During testing, researchers noted higher output and excellent retention of charactertistics during extended cycling. (443 milliamp-hours per gram after 2,000 cycles, against 370 for the graphite  used in commercial batteries) and a near 100-percent efficiency. 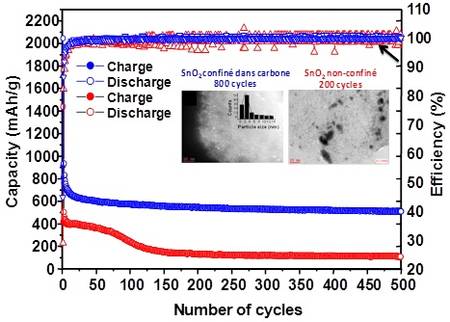 The Ryden dual-carbon battery “offers energy density comparable to a lithium ion battery, but over a much longer functional lifetime with drastically improved safety and cradle-to-cradle sustainability,” according to its makers.   Unlike most batteries that use different materials for anode and cathode, both are made of carbon in the Ryden cell.

Because the materials in this battery are common and inexpensive, Dou Kani, CEO of Power Japan Plus, says, “The Ryden dual-carbon battery is the energy storage breakthrough needed to bring green technology like electric vehicles to mass market.”  Ryden thinks this will achieve their goals of performance, cost, reliability, safety and sustainability.

Most attractive, Ryden claims their cells are “energy dense,” (although they avoid stating how dense), but they do say that their batteries can be charged 20 times faster than lithium ion batteries.  The batteries also operate “above four Volts.”  Most lithium batteries run at or near 3.7 Volts.

Because the battery can be manufactured on existing production lines, and has only carbon as an active material, prices can be kept low.  Carbon is the fourth most abundant element in the universe after hydrogen, helium and oxygen, so there’s little likelihood of a shortage any time soon, and no price spikes that occur with rare earth minerals.

Ryden claims over 3,000 charge/discharge cycles, enough to take your Tesla 900,000 miles (given equivalent energy density to today’s batteries), or to fly 3,000 hours.  Since the average lightplane logs 80 hours per year, these batteries would give over 37 years of service.  They’d last a lifetime in a motorglider.

Ryden claims theirs is “the safest high performance battery chemistry ever developed.”  Eliminating the “unstable active material” used in other batteries reduces fire and explosion hazards, and “minimum thermal change during operation” reduces the possibility of a thermal runaway.  The battery can be charged and discharged 100 percent with no damage.

The battery is 100-percent recyclable, and Power Japan Plus is testing the “Ryden battery with  its organic Carbon Complex material, working towards the goal of producing the battery with all organic carbon in the future.” Carbon Complex is made by precise reduction of organic cotton in a proprietary process.

The company will begin making 18650 Ryden cells later this year in Okinawa, Japan, and will license the technology to others for larger demand industries.

The press release concludes, “Current advanced batteries have made great improvement on performance, but have done so by compromising on cost, reliability and safety,” said Dr. Kaname Takeya, CTO of Power Japan Plus. “The Ryden dual carbon battery balances this equation, excelling in each category.” Let us hope the energy density is up to that claim.

Thin film Flexibility with no Lithium

James Tour, a chemist at Rice University and his colleagues have developed thin-film, flexible material with nanoporous nickel-fluoride electrodes layered around a solid electrolyte to deliver battery-like supercapacitor performance.  It has no lithium, so may be safer than “conventional” batteries.  The researchers’ work is the the Journal of the American Chemical Society.

Reputedly combining the best aspects of batteries and supercapacitors, the electrochemical device is about a hundredth of an inch thick, “but can be scaled up for devices either by increasing the size or adding layers,” according to Rice postdoctoral researcher Yang Yang, co-lead author of the paper with graduate student Gedeng Ruan.

“Standard manufacturing techniques” will enable production of even thinner devices, according to the researchers.  Tests showed that the test square-inch device held 76 percent of its capacity over 10,000 charge-discharge cycles and 1,000 bending cycles.  Their new material is flexible like graphene, carbon nanotubes and conducting polymers, and has the electrical storage capacity found in inorganic metal compounds, which are not known for their flexibility.

Rice scientist claim an energy density of 384 Wh kg–1, and power density of 112 kW kg–1 for their flexible material

“Compared with a lithium-ion device, the structure is quite simple and safe,” Yang said. “It behaves like a battery but the structure is that of a supercapacitor. If we use it as a supercapacitor, we can charge quickly at a high current rate and discharge it in a very short time. But for other applications, we find we can set it up to charge more slowly and to discharge slowly like a battery.”

Depositing a nickel layer on a backing, researchers “etched it to create 5-nanometer pores within the 900-nanometer-thick nickel fluoride layer, giving it a high surface area for storage. Once they removed the backing, they sandwiched the electrodes around an electrolyte of potassium hydroxide in polyvinyl alcohol. Testing found no degradation of the pore structure even after 10,000 charge/recharge cycles. The researchers also found no significant degradation to the electrode-electrolyte interface.”

“The numbers are exceedingly high in the power that it can deliver, and it’s a very simple method to make high-powered systems,” Tour said, adding that the technique shows promise for the manufacture of other 3-D nanoporous materials. “We’re already talking with companies interested in commercializing this.”