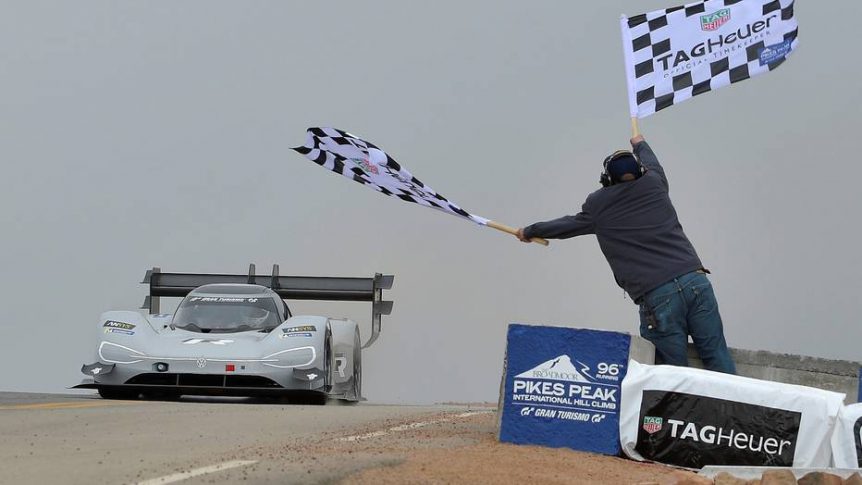 Every June, three races provide insight into how much electric power has become a regular part of motorsports: The Isle of Man TT Zero motorcycle race, the 24 Hours of LeMans, and the Pikes Peak International Hill Climb.  This year, there were disappointments as well as triumphs, but progress nonetheless.

For followers of electric two-wheeling, this year’s Tourist Trophy (TT) Zero had one high moment, a record-setting run by Michael Rutter on a Team Mugen bike, which did one lap at 121.824 mph (18:34.956 for the 37.75 mile course).  Admittedly, because of the relatively low energy density of batteries to petrol, the electric bikes do a single lap compared to the six laps on the more powerful and faster superbikes.  He was flagged off on his run by Prince William, Duke of Cambridge, and received his trophy in similarly royal style.

Rutter topped a field of “privateers” and university teams, which all did credibly.  It would be nice, though, to see other professional teams other than Mugen, enter the fray next year.

The 24 Hours of LeMans

Toyota’s hybrids won outright, though, finishing first and second after dodging slower cars to make it to the finish line together.

Volkswagen employees who put the record-breaking I. D. R electric vehicle together in only 250 days from inception to race completion must be miracle workers, setting a world record, breaking the old world record by 16 seconds, and doing it all on its first competition run up the mountain.

Driver Romain Dumas expressed his gratitude to those workers,  echoing thoughts from a corporate Director.  “The I.D. R Pikes Peak is the sporty forerunner of Volkswagen’s I.D. family. Today, we saw what this technology is capable of”, said Dr. Frank Welsch, Member of the Board of Management of the Volkswagen Passenger Cars brand with responsibility for “Technical Development”. “Every Volkswagen employee can be extremely proud of today’s result. I congratulate the team from the bottom of my heart. With a combination of outstanding engineering skills, passion and commitment, the team has managed to create a fantastic racing car in just eight months. The Volkswagen I.D. R Pikes Peak has now set the fastest time in the history of this hill climb, which spans more than 100 years – that speaks volumes for electric mobility.”

As with Toyota’s use of racing to improve its breed of hybrids for the everyday motorist, VW seems intent on polishing its electric image.  Following “Dieselgate,” the company has been quick to exploit a cleaner image, and the I. D. R machine shows that they can attack new challenges with a fervor one wishes from their competitors.

One hopes for increased competition in electric motorcycles, especially since they might provide powerplants and battery packages for tomorrow’s homebuilt electric aircraft.