Light electric motorgliders work well in the real world.  They’re light, compact, and easily transported to a flying site or back home.  Their small battery packs can be charged at home (under safe conditions) and provide enough duration to get the small machines to altitude, where they can explore thermals and ridge lift.  Because they are small, they require less materials and are often less expensive than standard-class or larger sailplanes.  Because they can self launch, they spare the cost of towplanes and possible chase crews.

We’ve reported on Birdy before.  It’s a 120-kilogram airplane, a class that in Europe allows pilots with a sport license and no medical to fly.  Its Eck-Geiger motor allows self-launching and one or two 3.6 kilowatt-hour batteries enable driven flight up to 200 kilometers (124 miles).

The ATOS Wing, derived from a popular hang glider, shows that one can achieve spirited performance from a composite fuselage and tube and ripstop fabric wings.  An idyllic video from the company shows the freedom such ultralights allow, including freedom from airports.

Not a glass cleaner, but a sailplane, Windex is an older design converted to electric power as part of a demonstration project by SAAB.  According to Wikipedia, Sven-Olof Ridder and Harald Undén started design of the motorglider in 1980, and founded Radab to produce kits for the little craft. 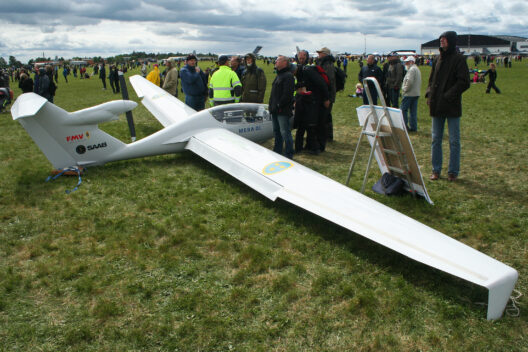 After losing the molds in a 1986 fire, the partners managed to fly an unpowered craft at the 1987 Paris Air Show.  It took until 1990 to replace the molds and resume production, with the first amateur-built kit completed in 1996.  Since then, only four powered models have been completed, and one unpowered.

Fully aerobatic, stressed to nine positive Gs and six negative, the little craft can top out at 270 kilometers per hour (170 mph).  With a mere 12.1 meter (39-feet, 8-inch) wingspan, the compact motorglider still managed a maximum glide ratio of 36:1.  It flew with Konig three-cylinder radial two-stroke engine, a motor as unique as the machine.

The SAAB MERA (More Electric Research Aircraft) is the electric version, and is not an ultralight at 261 kilograms (575.4 pounds) empty weight.  Substantially heavier than the Konig-powered 1200C at 175 kg (386 lb), batteries probably account for the added heft.  Loaded weight is 310 kg (683 lb) for the 1200C and unstated for the MERA.  For wind tunnel testing and calculations used in nonlinear lifting line model (NLLM) calculations, a pilot of 85 kg or 187.4 pounds was specified, making all-up weight 395 kg or 870.4 pounds.

Tests and calculations showed a best lift-to-drag ratio of 36.4, close to that claimed for the 1200C, but at a slightly higher airspeed because of the higher weight.  The tests show good controllability and stability in all axes.

These three sailplanes show a reasonable level of performance for their small size and light weights.  Prices for the MERA are not available as the airplane has not been in production for several years, but they should be close to those for other light sailplane/motorgliders.  One wonders if the molds are still available.