How do airliners stack up against cars for fuel economy? A German air carrier is trying to achieve efficiencies that will make their airplanes at least as economical per passenger mile as the best economy cars.

Europeans have been pursuing an elusive goal for the last 15 years, the 3-liter car. That’s not 3 liters of engine displacement, but the use of only three liters of fuel for every 100 kilometers (62 miles) traveled – about 78 miles per U. S. gallon or 99 miles per imperial gallon. Several cars have done that and better, but sometimes at the cost of driver comfort.

The Volkswagen Lupo turbo-diesel (1.2 liters displacement, 61 horsepower), for instance, came out in 1999, and was praised for its fuel economy, but not for its ride or cramped passenger compartment. As small as a Geo Metro, with aluminum hood and doors to save weight, the car did manage some record-breaking runs, including a three-car, around the world in 80 days marathon that averaged over 110 mpg for the team. Audi introduced a plusher, all-aluminum A-2 using the same basic platform, but its manufacturing expenses made it a high-priced econobox and a slow seller. 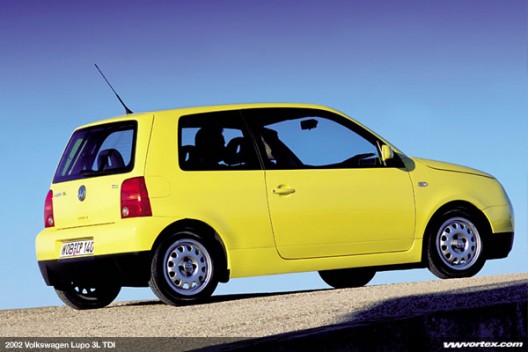 VW Lupo, as fuel efficient as a Next Generation 737?

American cars, despite being bigger and heavier than their European and Asian counterparts, have been edging up in fuel economy, averaging over 33 mpg for the last several years, according to the Research and Innovative Technology Division of the Bureau of Transportation Statistics. Recent moves to increase that average to 54.5 mpg have been controversial.

Consider that a 54.5 mpg car with four on board would achieve 218 passenger miles per gallon, thrifty enough for the NASA 2011Green Flight Challenge sponsored by Google, but too slow by half to qualify. Winning entries in that event averaged near or over 400 pmpg at over 100 mph, so one wonders what is possible in the near future with existing technology. 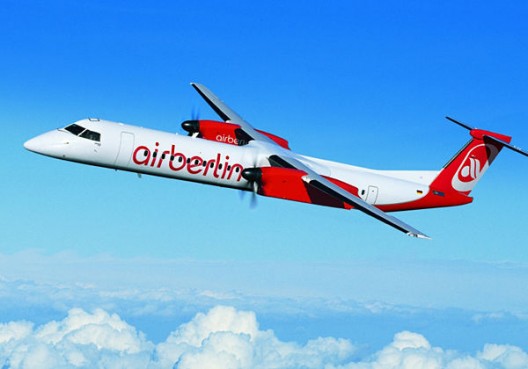 How Stuff Works.com notes that a Boeing 747 consumes one gallon (four liters) of jet fuel per second, or about five gallons per mile (12 liters per kilometer). But, the site explains, this isn’t as bad as it sounds.

“…Consider that a 747 can carry as many as 568 people. Let’s call it 500 people to take into account the fact that not all seats on most flights are occupied. A 747 is transporting 500 people 1 mile using 5 gallons of fuel. That means the plane is burning 0.01 gallons per person per mile. In other words, the plane is getting 100 miles per gallon per person! The typical car gets about 25 miles per gallon, so the 747 is much better than a car carrying one person, and compares favorably even if there are four people in the car. Not bad when you consider that the 747 is flying at 550 miles per hour (900 km/h)!”

According to Green Air Online.com, airberlin, Germany’s second-largest airline, managed 3.5 liters per 100 passenger kilometers flown in 2011, compared to the industry average of 4.7. The airline has a “young” fleet, with aircraft averaging 5.3 years of age, compared to the industry average of “just under” 14 years. The airline also has 60 pilots trained as “fuel coaches” who train others to monitor and reduce fuel flow.

Green Air Online reports, “CEO Hartmut Mehdorn said the airline had been a pioneer on climate and environmental protection issues and was a role model for the industry.” Mehdorn explained there were obvious economic and environmental considerations at work in this equation. 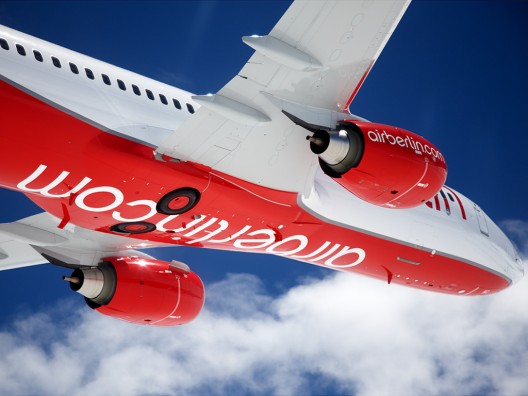 Airberlin Next Generation 737-800 with CFM turbines

Switching from older Fokker 100 aircraft to more fuel efficient Bombardier Q400 turboprops in 2008, the airline also replaced its Boeing 757s and 767s with Airbus A330s for short flights, and has 15 Boeing 787-8s on order for longer hauls. Older 737 “classics” will be replaced with Next Generation 737-700s and -800s, each of which will be equipped with CFM’s “tech-insertion” engines that are more fuel efficient and quieter than the units they replace.

airberlin is moving to paperless cockpits, replacing the up to 35 pounds of charts and approach plates pilots haul into the cockpit with electric displays. New lightweight catering trollies and passenger seats reduce weight, and even cargo containers will be lighter, causing airberlin to estimate savings of 30,000 liters (7,500 gallons) per year in fuel savings per airplane, and reduced carbon emissions of 1,100 tons.

Other, operational techniques help airberlin, a low-cost regional carrier, achieve lower fuel use and better efficiencies. Pilots start engines only when the airplane is pushed back from the boarding bridge, and use ground power instead of the airplane’s auxiliary power unit (APU) while at the bridge. Pilots taxi as much as possible with only one engine.

In flight, “precise altitude and wind profiles are used to determine the optimal cruise altitude for each flight. The airline uses Lido management software to calculate the most fuel-efficient route.” The airline makes satellite-based precision landings, even flying curved approaches to avoid mountains and bad weather, and reduce noise and emissions.

An independent survey last year showed “only 14% of respondents could accurately estimate how much fuel a modern commercial aircraft uses to transport a passenger a distance of 100kms – the correct answer being four litres. Over three quarters believed it to be 20 or more litres, with the favoured answer being 40 litres, or roughly five to 10 times more than an average car.”

With organizations like airberlin and leaders like Hartmut Mehdorn, that perception may change to a more rational and accepting one – a win-win for the public and the industry.