Ken Rentmeester, a regular reader of the blog, shared a news item from the IEEE (Institute of Electrical and Electronics Engineers) Spectrum.   Calling Titan Aerospace’s Solara unmanned aircraft “atmospheric satellites,” the article gives a brief history of solar-powered craft, including the Boucher brothers’ Sunrise I, the first solar-powered airplane in 1974, Paul MacCready Jr.’s first piloted solar-powered flight in 1980, and the current world’s endurance record for unmanned, solar-powered flight  by the QinetiQ Zephry in 2010. 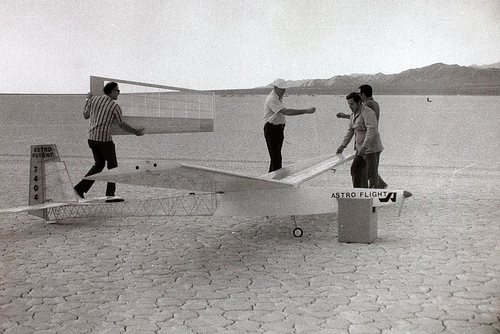 Roland Boucher and friends assembling Sunrise I in 1974

That airplane follows the look of the Boucher’s early effort, and Titan’s examples look a great deal like scaled-up versions of FAI F5-type models which rely on electric self-launching, rapid climbs and extreme flight capabilities to win contests. 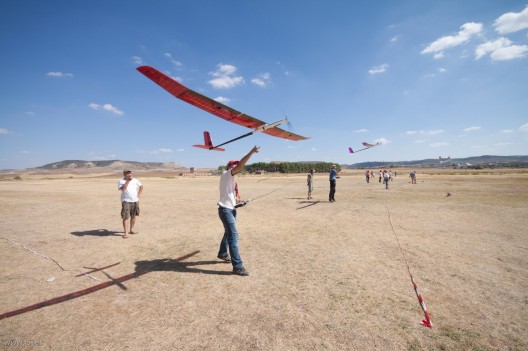 Despite great successes such as Zephyr’s, there so far has been no commercial market for this type of aircraft.  Titan hopes to overcome shortcomings that prevented broader acceptance for its predecessors.  These included limited photovoltaic capabilities, poor battery endurance, and fragile airframes, which were simply scaled-up from the builders’ model airplane experience.  Spruce and balsa could be shattered by “a little bit of weather,” as Kevin Jones, an aerospace engineer at the Naval Postgraduate School in Monterrey, California explained to the Spectrum. 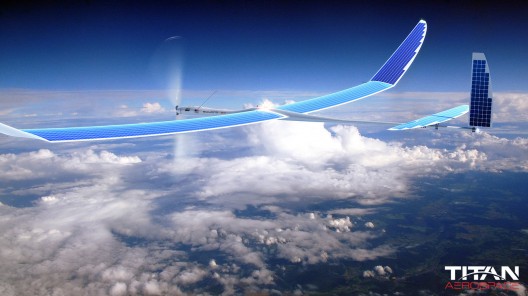 Titan S50, potentially in commercial use by 2015

The current aircraft, the Solar 50 (for its 50-meter – 164-foot wingspan), can serve many functions now performed by more expensive orbital satellites.   As Jones points out to the magazine, solar cells have improved from 10 percent efficient when Roland Boucher was flying his first sun-powered airplanes to 40 percent today.  Energy density for lithium batteries has increased in a similar fashion.  Modern carbon-fiber construction allows large, light airframes that retain their original shape, even in highly turbulent air.

Because of these factors, and because the Titan airframes will fly at 50,000 to 65,000 feet, where weather is “idyllically” stable, missions could extend to months, and in the future, up to five years.   Its 3,000 solar cells would charge the on-board batteries, claimed to be able to hold enough energy that together with the solar cells in operation, they could produce up to seven kilowatts of power.

Large as it is, the Solara 50 could carry up to a 250-pound payload (according to the web site – only 32 kilograms or 70.4 pounds according to the video), enabling use of cameras, sensors, and communications devices.  Within a 100-mile radius, the airplane could act as a fire spotter, communications satellite, and surveillance tool.  According to the company, “Solara 50 houses a sophisticated autopilot that can fly, takeoff and land the plane autonomously. In addition to a variety of onboard sensors, there are high speed radio links that transmit telemetry data back to the ground station.”

Presumably, the Solara 60 would have 10 meters more span and be able to carry an even greater payload with enhanced capabilities.

Since they can be retrieved and refitted at will, these aircraft can provide greater flexibility at lower costs than their space-borne competitors, and their adaptation and expanded use may give us new things to view in the night sky.   As Ariel Bleicher concludes the Spectrum article, “Soon, you’ll be able to stand in your backyard at dusk and spot them – twinkles of light floating at the edge of the atmosphere.  At long last, the eternal aircraft may be within reach.”