The news item from David L. Chandler at the Massachusetts Institute of Technology (MIT) claims that researchers there have come close to realizing the “ideal” for solar absorption, trapping and containing all of light’s wavelengths that reach earth’s surface from the sun.  This absorbed sunlight is converted to heat by a two-dimensional metallic dialectric photonic crystal, which can absorb sunlight from a wide range of angles and withstand extremely high temperatures.  Even better, it can be made cheaply and in large quantities, according to MIT.

One aspect of the design that might make it difficult to use on aircraft is its high operating temperature.  A solar-thermophotovoltaic (STVP) device, the energy from the sunlight hitting the cells is “first converted to heat, which then causes the material to glow, emitting light that can, in turn, be converted to an electric current.” 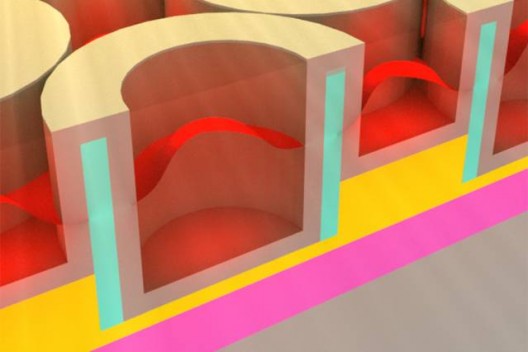 Having worked on an earlier version of STVPs, the researchers noted that the solar cells had many hollow cavities.  Nature and scientists abhorring a vacuum, they decided to fill the gaps.  Filling in our gaps, Dr. Jeffrey Chou of MIT’s Department of Mechanical Engineering explains,   “They were empty, there was air inside.  No one had tried putting a dielectric material inside, so we tried that and saw some interesting properties.”  Since most of the sun’s energy comes within a specific band of wavelengths, both inside and outside the visible part of the spectrum, it’s important to capture wavelengths within a very specific window.  Chou adds, “We built this structure, and found that it had a very good absorption spectrum, just what we wanted.”

The dielectric-filled concavities help trap and keep the solar energy, and Chou and his team found they could control the absorption by changing the size of the nanocavities.   Seemingly, tuning those cavities matches the solar cells to the applications for which they are intended.

A bonus is that these “devices” can be made on existing machinery, probably silicon wafer systems up to 12 inches on a side.  This would enable relatively large scale production compared to the alternatives formed on expensive metal substrates a few centimeters to a side.  Many “wafer fabs” or silicon chip manufacturing facilities exist that are redundant to the making of integrated circuits, and which could be easily converted to making solar cells.

Again, the high operating temperature might be a negative factor, but Dr. Chou reports that the new materials he and his team developed can withstand 1,000° Celsius (1,832° Fahrenheit) for up to 24 hours “without severe degradation.”

In order to take maximum advantage of systems that concentrate sunlight using mirrors, the material must be capable of surviving unscathed under very high temperatures, Chou says. The new material has already demonstrated that it can endure a temperature of 1,000 degrees Celsius (1,832 degrees Fahrenheit) for a period of 24 hours without severe degradation.  Because the cavities seem to be immune to off-angle rays, Dr. Chou says that solar trackers are not needed, reducing cost and complexity.

MIT reports, “While the team has demonstrated working devices using a formulation that includes a relatively expensive metal, ruthenium, ‘we’re very flexible about materials,’ Chou says. ‘In theory, you could use any metal that can survive these high temperatures.’”

This is the beginning of a long process and Dr. Chou cautions that commercialization may be five years out, but others in the scientific community think it’s a splendid start on a promising new pathway.

You can find the team’s paper on their work in the  journal Advanced Materials, co-authored by MIT postdoc Jeffrey Chou, professors Marin Soljacic, Nicholas Fang, Evelyn Wang, and Sang-Gook Kim, and five others, including MIT research scientist Ivan Celanovic and former graduate students Yi Yeng, Yoonkyung Lee, Andrej Lenert, and Veronika Rinnerbauer. The work was supported by the Solid-State Solar Thermal Energy Conversion Center and the U.S. Department of Energy.

Dr. Chou is not a one-trick pony, seemingly making breakthroughs in several important areas of energy research, including water splitting – essential to hydrogen fuel creation; using nanophotonics to convert sunlight to electricity and even mechanical actuation; and crafting wireless communications systems through the use of micro-electrical mechanical  devices to align light rays precisely through free-space connections.