Having recently been allowed a test drive in a Nissan Leaf , in which the late autumn leaves falling on the car made more noise than the car, I was taken by the quiet, the reasonable performance, and general sense of how much more refined everything is than on my well-worn 1995 internal-combustion vehicle.  Cars are indeed getting better, but an issue remains with electric cars and airplanes – range.  The Nissan representatives, a lively bunch of presenters who took prospective drivers through a “pre-flight” education program, admitted that shortcoming, and promised a coming series of charging stations dotting the I-5 from Canada to Mexico at 100-mile intervals, the demonstrated range for the Leaf.

Israeli entrepreneur Shai Agassi has come up with an interesting twist on recharging, distributing battery switching stations around Israel.  A customer pulls into the station and drives the nearly discharged vehicle over a pit, in which a robotized conveyor system and associated machines disconnect the drained battery and plug in a newly-charged unit – all in about a minute. Note that the car shown is a Renault/Nissan variant of the Leaf.

Agassi’s plans, according the Smithsonian magazine’s October article, include possibly giving the cars away and charging for their use.

“Agassi’s business plan is unique among electric-car service providers. Others will make the vehicles. He will lease the batteries to car owners, and sell access to his switching and charging network. He expects to make his money selling miles, much as a cellphone-service provider sells minutes. Subscribers to Agassi’s plan would be entitled to pull into a roadside switching station for a battery change or to plug into a charging station, where dozens of other cars might also be hooked up, for an overnight or workday charge. Agassi estimates his customers will pay no more for battery power than they would spend on gasoline to travel the same distance. As business grows and costs fall, Agassi says, profits will soar. He says eventually he might give cars away, just as cellular-service providers offer free phones to customers with long-term contracts.”

Such an enterprise has a fair chance of working in a small country or area, critics point out, but may fall short in places like America, Australia or Russia, with vast distances challenging the 100-mile limit and giving rise to “range anxiety.”  A battery company in Germany may have found an answer.  Specialists such as Alan Cocconni and Tesla Motors have pushed range to over 300 miles, and the Racing Green Endurance team from Imperial College London recently drove over 250 miles daily,  traversing the Pan-American Highway on what were essentially model airplane batteries. 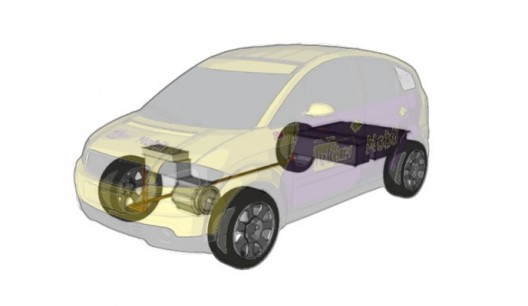 DBM's electrified Audi A-2, with controversial Kolibri (Hummingbird) batteries under trunk. 600 pounds in this location might lead to a weight-and-balance problem.

A recent news item promised an end to the question of range anxiety and indicated at least a three-fold increase in energy density over existing lithium batteries.  In October, DBM Energy, a German company, posted a trip from Munich to Berlin in an electric Audi A-2, 600 kilometers (about 373 miles) in seven hours of driving on a single charge of its Kolibri (Hummingbird) batteries.  The car was claimed to weigh a little over 2,600 pounds including 600 pounds in batteries – the same as the 100-mile pack on the Leaf.

One investment-oriented web site proclaims the advantages of the battery, and touts the claimed 2,500 recharge cycles, fire and explosion-proof nature of the cells, and the high energy density.

Another more skeptical site notes the lack of follow-up from DBM, and hints that the firm may be just a post office box front.  Certainly this writer’s attempts at contact have met with no responses.

We will continue to look for demonstrated performance from known entities such as Nissan, Shai Agassi’s Better World, and Imperial College London for guidance in what the state of the art can achieve, and hope for eventual verification of DBM’s overall claims.