The blog has covered Professor Daniel Nocera’s “artificial leaf,” a means by which a flat panel in water and exposed to sunlight would generate clean water and hydrogen.  But that promising development has been set aside by the startup company Catalytix that attempted commercial development of the leaf for now.  Instead, the company is now pursuing the design of a practical low-cost flow battery for grid storage.

Researchers at Berkeley’s Joint Center for Artificial Photosynthesis (JCAP), though, may have found a different approach to the artificial leaf that will overcome many shortcomings in its predecessors.  Gary Moore, a chemist and principal investigator with Berkeley Lab’s Physical Biosciences Division, found that in his artificial leaf, “nearly 90-percent of the electrons generated by a hybrid material designed to store solar energy in hydrogen are being stored in the target hydrogen molecules.” 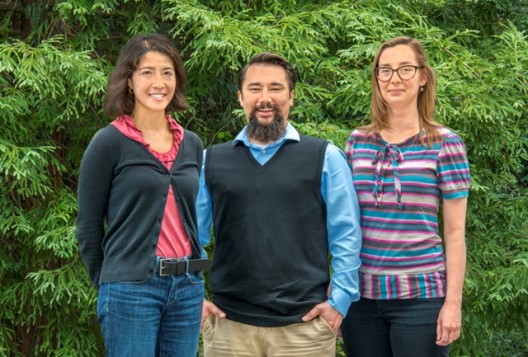 In fact, JCAP’s main concern is capturing sunlight and turning it to some form of fuel, exactly what a leaf does in converting sunshine to sugar to feed its host plant.  Part of the research involves molecular and nanoscale interfaces, the links between light absorption and fuel generation.  Moore’s research attempts to overcome the various inefficiencies that have kept artificial photosynthesis from being more efficient.

Moore led an efficiency analysis study of a photocathode material used to catalyze the production of hydrogen from sunlight.  The Berkeley-devised material is a hybrid made by interfacing the semiconductor gallium phosphide with a molecular hydrogen-producing cobaloxime catalyst.

Moore explains, “Ultimately the renewable energy problem is really a storage problem,” because the sun goes away from time to time (or at least the earth turns away from it).  If the energy collected during the bright periods could be stored as energy-rich fuel, the energy could be released on demand. 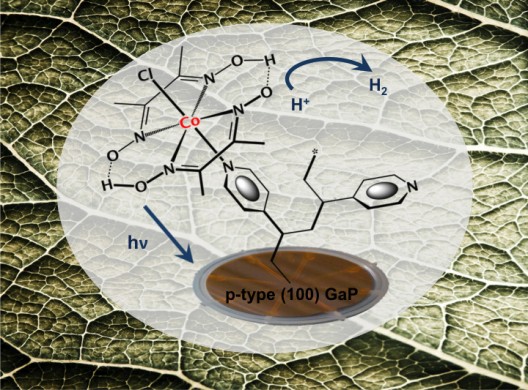 Moore thinks his team has  found a way to do that.  “We’ve shown that our approach of coupling the absorption of visible light with the production of hydrogen in a single material puts photoexcited electrons where we need them to be, stored in chemical bonds.”

He knows this will not be an easy task.  “Bionic leaves that produce energy-dense fuels from nothing more than sunlight, water and atmosphere-warming carbon dioxide, with no byproducts other than oxygen, represent an ideal sustainable energy alternative to fossil fuels. However, realizing this artificial photosynthesis ideal will require a number of technological breakthroughs including high performance photocathodes that can catalyze fuel production from sunlight alone.”

Their hybrid photocathode uses gallium phosphide, which absorbs visible light to produce “significantly higher photocurrents than semiconductors that only absorb ultraviolet light.”  The cobaloxime catalyst, like the cathode, is a relatively abundant, low-cost material. The interface between the photocathode and the cobaloxime enables production of “energy-dense fuels” from the solar energy stored in hydrogen molecules.

Moore explains the possible versatility that the three-dimensional nature of their platform provides.  “The novelty of our approach is the use of molecular catalytic components interfaced with visible-light absorbing semiconductors.  This creates opportunities to use discrete three-dimensional environments for directly photoactivating the multi-electron and multi-proton chemistry associated with the production of hydrogen and other fuels.”

One “bottleneck” arose from the fact that the total number of solar photons striking the hybrid-semiconductor surface produced only 1.5 percent that number of photocurrent reactions, even from the entire range of the solar spectrum.  The team is looking for light absorbers with improved spectral coverage of the sun, faster and more efficient catalysts, and new attachment chemistries.

The team published its research in the Royal Society of Chemistry’s journal Physical Chemistry Chemical Physics on February 12.