We like to think that our mastery of aerobatics is second to none, but aircraft only achieve a small part of the birds’ ability to hover, swoop, and perch on a target at zero forward airspeed.  Researchers in Switzerland and England, though, are making progress toward deeper emulation of nature’s masters of flight.

Floreano, attempting to mimic the birds’ movements, helped develop a series of wing-tip elements that emulate the primary flight feathers on birds.    Matteo di Luca, one of the researchers, explained, “We were inspired by birds: they can radically transform the size and shape of their wings because they have an articulated skeleton that is controlled by muscles and covered in feathers that overlap when the wings are folded.”  The drone also has feathers that it can fold and overlap like a fan.

Just as the original designer contended with making things light enough inside birds to allow them to fly, keeping the basic structure and complex folding mechanism light enough for flight was a challenge for EPFL researchers.  Stefano Mintchev, explained, It is extremely difficult to find the right balance between aerodynamic efficiency and the weight of the device.”  Composite materials enable us to have strength and lightness in our artificial bird’s components, much like the hollow bones in real birds.

Floreano found one advantage to the folding mechanism, though – the ability to forego ailerons normally found on drones.  “By changing the wingspan and surface area during flight, we could make it turn automatically.”  This kind of morphing wing might be able to adapt not just to winds and gusts, but enable the bird-like drone to fly in urban environments where winds change rapidly. 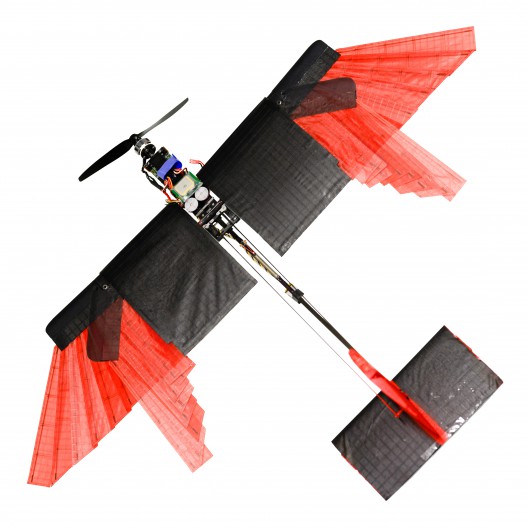 This work was funded by NCCR Robotics.  The team’s paper, “Bioinspired morphing wings for extended flight envelope and roll control of small drones,” can be found in the December 16, 2016 issue of Interface Focus.  Luckily, the entire paper can be viewed for free.  The cleverness of the wing-tip feather folding mechanism is readily apparent.

How does a bird do that little swoop, pull-up and perching maneuver so precisely?  Whether it lands on a telephone line, tree branch, or hillside, a bird has a natural ability to set itself down and literally stop on a dime.  University of Bristol and BMT Defense Services have managed to duplicate that tricky maneuver, something a gymnast would give her right leg to be able to do.

Creating machine learning algorithms, the groups made the “very first” unmanned aerial vehicle (UAV) perched landing.  Emulating birds’ ability to plunk down in a confined space would make drone deliveries or smaller airports real possibilities.  This is especially impressive with a fixed-wing machine, which would be able to drop in quietly, especially compared to the raucous entry and landing of a rotary-winged vehicle.

BMT and the University “have demonstrated how the combination of a morphing wing UAV and machine learning can be used to generate a trajectory to perform a perched landing on the ground.”  This overcomes the limitations of fixed and rigid wings, which don’t allow for the kind of “organic” flight control birds seem to so naturally practice.  The UAV has been tested at altitude, and the team is working toward repeatable ground landings.

Team leaders cite the ability to “revolutionize the way we gather information,” and apply that harvest through artificial intelligence (AI) to “create highly maneuverable and agile unmanned vehicles.