By eGull from West Virginia

72-year-old Jean Preckel of Bruceton Mills, West Virginia flew her home-built Beierle eGull from her home town to the Experimental Aircraft Association gathering accompanied in a chase car driven by Mark Beierle himself. 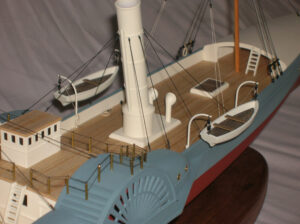 She is a craftswoman of note, having built fine-arts level models of boats from 1983 until she retired a few years ago.  In 2019, she built and launched a lovely row boat, which displayed her great workmanship and rowing ability.

The regional TimesLeader online news outlet reported that having, “…biked biked across the country, along the Appalachian Trail, traveled across Europe working odd jobs, [she] was looking for something new. She eventually came across electric planes.”  This led her to Mark Beierle, who fields a unique builder assistance program.

Mark probably supplied builder assistance to Jean, and acted as her ground crew on their epic trip to Oshkosh.  It would take about 20 stops for the 670-mile journey, with Jean usually arriving at the destination airport, checking for available plug-ins for the battery charger being carried in Mark’s car.  The pair did arrive at AirVenture on the second day.

The report indicates, “Each charge uses 60-70 cents in electricity, meaning the entire trip will cost Preckel under $15.”  Mark reported drove an electric car for the trip, but a gas burner would have consumed a low of $100 -$150 in fuel for the same distance. 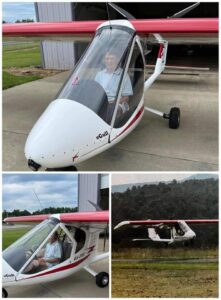 “On Saturday, July 16th, Jean Preckel from Bruston Mills, WV, landed this plane at the Monroe County Airport to recharge. She ended up staying overnight at the airport in a tent due to inclement weather.” Mitch Schumacher, Monroe County, Ohio (Memories)

Putting another series of landings in her log book Jean reflected her probably normal view of life.  “You only have one chance to live; you’ve got to give it a whirl.”

Added Note: The EAA featured Jean in their recap of AirVenture 2022.  Read all about it here.

By EEL from the West Coast

The two Cessna 337s converted to hybrid power by Ampaire had accumulated 11,700 nautical miles (13,464 statute miles or 18,829 kilometers) before the recent record flight to Oshkosh by test pilot Elliot Seguin.  His initial hop from Los Angeles, California to Hays, Kansas covered 1,135 miles, the longest non-stop trip so far by a hybrid aircraft.  Total distance to OSH was 1,880 miles, covered in 16 hours.

Elliot had the following thoughts on his Linkedin page: “33rd Oshkosh and on the schedule – when Ampaire started talking about bring the Eel to the show a few months back all I could think about was all the dirt and rocks between Oshkosh and California. I would have never guessed that we’d be invited to fly or that the EAA community would be so receptive to the hybrid electric Skymaster. My voice is shot from talking about airplanes, my nose is sun toasted and we are still 800 NM from home but I’m still buzzin off a great week at the home of aviation, the land of cheese curds, bratwurst, and Poberezny.”

Another post adds, “The hybrid electric Eel made it to Oshkosh, on a single charge – 1600 NM, 16 hours of flying, and no battery charging. Several months of planning and testing, stoked to have been a part of the team that made it happen.  Airplanes are cool.”

The Electric EEL was awarded a coveted flying slot to highlight its advanced technology and its benefits to the broad aviation community.@EAA #OSH22 #AirVenture #electricaviation pic.twitter.com/z3WnsafYDr

On Tuesday, Seguin performed in the AirVenture flight display, trailing that characteristic Cessna Skymaster sound for the crowd to enjoy.

Not content to demonstrate hybrid electric aviation in front of an appreciative crowd, Ampaire is teaming with ARPA-E. the Advanced Research Projects Agency – Electric, to help define and test hybrid-electric power systems for aircraft.  Projects include a solid-state circuit breaker from the Illinois Institute of Technology, a silicon carbide inverter from the University of Arkansas, and a flying capacitor converter from the University of California – Berkeley.  Ampaire says, “Technologies like these could ultimately reduce the weight of an aircraft, which is critical to success.”

Beyond making more EELs, Ampaire has found customers for their hybrid conversion of the Cessna Caravan. The EELs can carry three passengers or 450 pounds of cargo for up to 400 miles.  Next up, their conversion of the Cessna Caravan can lift nine passengers or up to 2,500 pounds of cargo for over 800 miles at a fuel savings of 50 t0 70 percent and and operating cost savings of 25 percent. 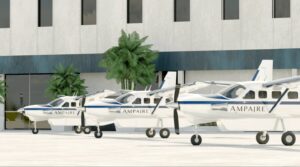 Operator Wing Tips has firm orders for 25 Eco Caravans, with the possibility of future orders for up 250 aircraft

Going even larger, Ampaire will convert a twin-engine DeHavilland Otter to a  four-motor Eco Otter, capable of carrying 19 passengers or 4,000 pounds of cargo over 700 miles.  Lower fuel, operational,. and maintenance costs follow. 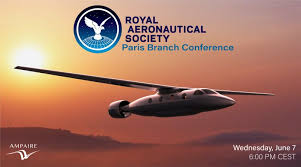 Finally, Ampaire still promotes their Tailwind, a sleek vision of future flight that will feature Boundary Layer Ingestion (BLI) propulsion.  This executive carrier should have high speed and low noise with appreciable gains in efficiency, speed, and range.

Ampaire seems to be reaching out to a variety of markets and offering readily adaptable technology.  Orders seem to be picking up, and their enthusiastic reception at Oshkosh bodes well for the company’s future.