A group of Italian engineers is embarking on a 13,000 kilometer (8,000 mile) road trip from Italy to Shanghai, China, retracing Marco Polo’s route.  The vehicles are central to this adventure, though – two pairs of bright orange Piaggio Porter vans, (mostly) driverless and running on stored electricity and sunlight.  With sensors and cameras nestled under their solar panel roof racks and control by a Vislab system, the two pairs of vehicles will be as autonomous as possible, even though a human will be in the driver’s seat to take over in an emergency and another technician will be on board to help with repairs.   Another pair of guide vehicles will lead the way for each pair of autonomous vehicles, and several other support vehicles will follow along. 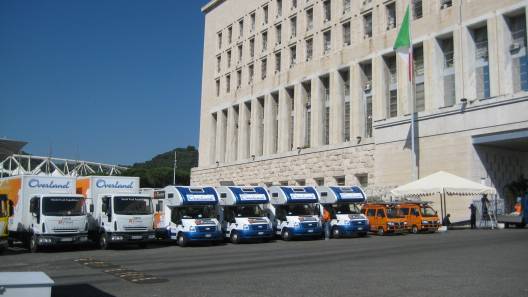 The Vislab Italy-to-China team, with orange research vehicles on the right

The caravan won’t be much faster than Polo’s animal transport, traveling a maximum 50 to 60 kilometers per hour (32 to 37 miles per hour).  The Piaggios can travel tw0 to three hours before needing an eight-hour recharge.   When one pair is driving, the other pair will be carried on a large support carrier.  The team anticipates traveling about four hours per day between the two pairs.  As the last extreme, gasoline generators may be required to provide charging in extremely remote locations, such as Mongolia or Siberia, where electrical service is not readily available.

Project leader Alberto Broggi explains, “What we are trying to do is stress our systems and see if they can work in a real environment, with real weather, real traffic and crazy people who cross the road in front of you and a vehicle that cuts you off.”  Broggi runs the Vislab facility, an artificial vision and intelligent systems laboratory at the University of Parma.   The voyage is meant to “be the base for an exhaustive and extreme test of VisLab technologies developed in the last years: systems like lane detection, vehicle detection, pedestrian detection, terrain slope estimation, off-road sensing, waypoint following and dead reckoning, trajectory planning, actuation and control,” according to Vislab’s web site.   The fully instrumented vehicles will collect data every foot of the way, and the resulting 100 terrabyte database is slated to be available to other vehicle researchers.

Starting from Parma on July 26, the vehicles should reach Shanghai by October, but the schedule will probably vary because of the harsh terrain and unpredictable weather.

Another car, faster and running on more civilized roads, Imperial College’s RGE (Racing Green Endurance) supercar is making great time on its trip down the 26,000 kilometer (16,120 mile) Pan-American Highway from Prudhoe Bay, Alaska to South America’s southernmost city, Ushuaia.  With some runs between recharges exceeding 250 miles, and with 400 brake horsepower on tap, the team will probably reach its goal well before spring comes to the tip of Patagonia,  the seasons being reversed in the southern hemisphere.

Spending their 29th day on the road will give the drivers and the car a chance to recharge in Las Vegas, Nevada, before they continue their headlong charge toward the Texas-Mexico border.  The car is indeed a supercar, and turns heads readily, including causing a non-injury crash near Santa Rosa, home of the CAFE Foundation when they were parked for a photo opportunity.  One problem with such a stunning car is that it draw’s the attention of highway patrolmen, and the drivers have been pulled over nine times on their journey.

The team’s efforts have been detailed earlier in this blog, following their double lap around the ring road surrounding London, and their progress is recorded almost daily on their web site, which is an education in itself on the car, the team, and the route.

Despite the arduous nature of the trip, their mission is to inspire others with what is possible with electric vehicles in real world conditions, much like the Italian team’s stated goal.  Both teams deserve our applause as they explore the limits of what electric vehicles can do.  That both teams are taking on such imposing missions shows a confidence in themselves and the technology that is now available.