Two very different hydrogen-powered aerial vehicles have come to our attention, each with a different mission, but both with endurance and range as primary functions.  Both use a fairly straightforward fuel cell/motor arrangement to power their flights.

Doosan Mobility Innovation (DMI) is a major drone manufacturer, and their largest products push against the FAA’s 55-pound (24.97-kilogram) weight limit.  Their DM30, powered with a DS30 fuel cell and a 10.8 liter H2 tank weighs 21 kilograms and can carry a five kilogram (11 pound) payload.  Carrying a full payload may require using the smaller seven-liter tank.

Alessandro Mascellino, writing in EE Power, describes recent combination of resources that makes long-range drone deliveries possible.  “The first machines built as part of the collaboration can fly two hours on a single charge and have already transported masks and emergency supplies between US Virgin Islands. The drones feature a number of power components by Vicor.”

Partnering with Vicor, Doosan provides the vehicle and the power system, Vicor finesses the regulation of that power.  In the DP30 power pack, two of DMI’s fuel cells deliver a “highly variable output voltage (40 to 74 Volts).”  This Power Delivery Network (PDN) consists of two separate power trains: the first delivering 12 Amps of 48-Volt power the drone’s rotor motors, and the second providing up to eight Amps of 12-Volt power to the stack’s controller board and its cooling fans. 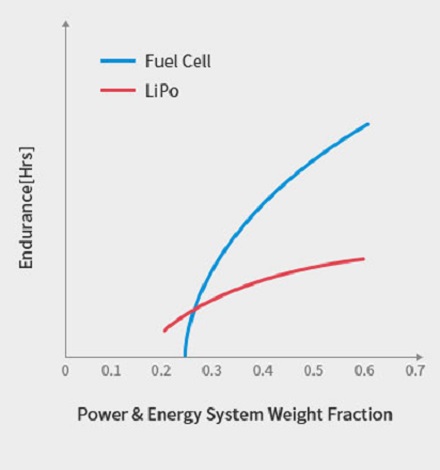 With humanitarian and commercial missions in mind, DMI has flown between the U. S. Virgin Islands, as described above, and delivered Automated external defibrillators (AEDs) to the top of Mt. Hallasan, the tallest mountain in South Korea (1,947.06 meters or 6,388.0 ft).  This ability to haul a large payload to such an altitude is an impressive demonstration of the drone’s capability.

Even longer ranges are possible with hydrogen-powered fixed wing aircraft.  Delft Technical University students are busy building a 1/3-scale model of the Phoenix motorglider they hope to demonstrate this year.  Their introduction video certainly makes that ambition seem plausible.

Before regular readers of the blog complain that the airplane looks a lot like Stuttgart University’s e-Genius, the student team credits that aircraft with inspiring the design for their craft.  In fact, e-Genius was originally Hydrogenius, as presented in 2009.  Originally designed with a range of 375 miles on 9.3 pounds of H2 (roughly equivalent to 4.2 gallons of gasoline).  That would have equaled 178.6 passenger miles per gallon, a creditable achievement.  In reality, during the 2011 NASA Green Flight Challenge sponsored by Google, the craft achieved 375.8 passenger miles per gallon.  It’s since gone on to fly with a rotary-engine range extender mounted in an underwing pod.  TU students think they can do better on hydrogen, though.

“Flying from Amsterdam to Casablanca (Morocco) on one tank of fuel? This can be done until today by not a single engine airplane!”  The roughly-translated idea of traversing 2,327 kilometers (1,446 miles) in a single hop is part of what the AeroDelft team members hope to accomplish on a fairly ambitious schedule.  First, they will fly their 1/3-scale PT this year.  Then, by 2022, a full-size, 18.6 meter span two-seater will take flight on gaseous hydrogen, followed by a liquid-fueled version 2024.

Even the skills of a richly-talented crew are challenged by the tech required for H2 operations.  44 students from 17 countries worked on the project so far.  “The 1:3 scale prototype is powered by a 1500W fuel cell coupled with a battery pack for take-off power and safety. Hydrogen is kept in a cryogenic tank at -253°C and warmed to 0°C using a complex tubing system.  ”The tank is insulated with a 20-centimeter (7.87-inch) thick layer of material to maintain the extreme cold.

One pound of H2 will fly the model for seven hours and as many as 500 kilometers (310 miles).  Scheduled for this spring, the model will serve as a proof of concept for the full-scale aircraft.  As though 700-bar pressurized tanks and complex fueling were not enough, the craft will feature, “boundary layer suction on the wings, consisting of 14 million fine bores… on the upper side of the wing,” which could add up to 14 percent to lift coefficients. 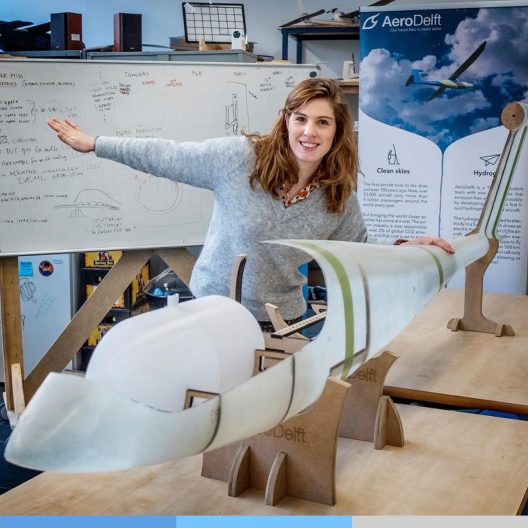 TU students hope to, “Inspire the aviation industry to act on the changes necessary to achieve a global sustainable turnaround in aviation. After two years of dedicated research and manufacturing activities, the first prototype “Phoenix PT” represents an important milestone.”

Even more ambitious, perhaps, students predict the first H2 flight around the world by 2024 and the first flight of a commercial aircraft powered by H2 by 2035.