Two different but very similar electric Short Take Off and Landing (eSTOL) aircraft from two different companies are making progress toward realization.  Both are products of teams originally committed to electric Vertical Take Off and Landing (eVTOL) designs, so the shift to different configurations is of interest.  eVTOLs are limited in range by the need to lift their entire weight on their rotors – some for the totality of the flight.  eSTOLs use aerodynamics to enable longer range, and with high-lift devices, can use small fields from which to operate. 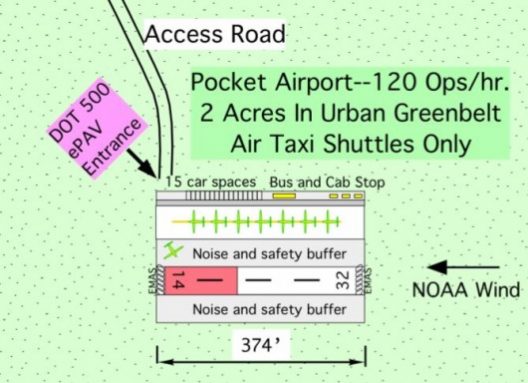 Dr. Brien Seeley, head of the Sustainable Aviation Foundation, has been a long-time proponent of what he called “pocket airparks.”  These neighborhood or urban sites would be contained within roughly one-block perimeters, use aircraft capable of extremely short takeoffs and landings, low noise, and quick turnarounds.  Electric aircraft and their quiet operation would allow placing such airparks in more areas and could make access to air travel as common as hopping on a local bus.

To enable that greater flexibility, Airflow Aero announced a letter of intent with Ravn to supply 50 eSTOL aircraft.  Airflow now has over $200 million in orders.  This will enable Ravn to better serve its customers, according to CEO Rob McKinney.  “As a regional operator, we are committed to serving the many large and small communities of Alaska. That means we are constantly seeking out new ways to deliver the best value and experience for Alaskans.  With Airflow, we benefit from the new capabilities the aircraft offers that open up new and different destinations, the constantly improving efficiencies of electrification, and alignment between our fleet and the rising demands of our customers to travel with the smallest carbon footprint possible.” 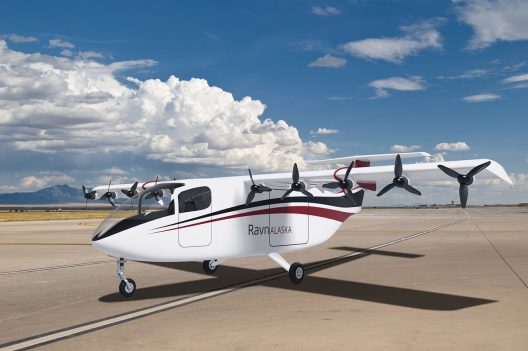 The eight-motor, single-pilot, seven-passenger aircraft will be able to fly from the shortest runways and with enough range to serve all of Ravn’s remote destinations.  It will also be able to carry enough cargo to be useful in supplying those destination. 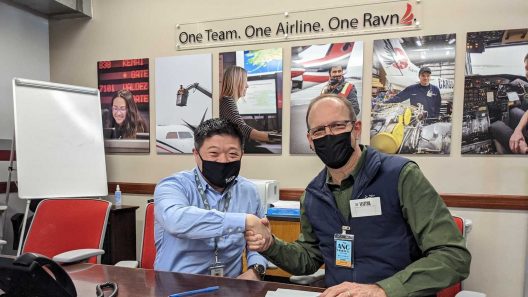 Tom Hsieh,President of Ravn Alaska, and Marc Ausman, CEO of Airflow move aviation into the future

Marc Ausman, CEO and co-founder of Airflow, adds, “At Airflow, we’re partnering with companies that seek to add new aircraft with new capabilities to their fleets that are flexible, cost-effective, and carbon-neutral.”  Because of their STOL capabilities, Airflow’s craft need no new infrastructure and present few “hurdles” to certification.  Their hybrid power system enables long enough endurance to serve all of Ravn’s existing routes.  “Future aircraft models from Airflow will feature autonomous systems to further improve cost efficiency and safety.”  These will include a system dubbed a “Virtual Tailhook,” something tested on a scale model and soon on a Cessna 210 demonstrator.  This will enable pilots to “nail” landings as though they had snagged arresting cables across a flight deck.

Electra.aero unveiled its first commercial product to serve regional air mobility markets. Like the Airflow eSTOL, it’s, “Designed to carry up to seven passengers and a pilot as far as 500 miles while operating out of areas shorter than a soccer field, including rooftops and parking lots. Electra’s ‘blown lift’ technology – where the electric motor-driven propellers blow air over the entire span of the wing and its flaps – allows safe, energy-efficient takeoff and landings at speeds below 30 mph while cruising at high-speeds of 200 mph.”

“Blown lift,” according to electra.aero’s web site, “is a special aerodynamic technique that tricks the wing into thinking it’s much bigger than it really is. It’s been used in other niche markets in the past but combined with distributed electric propulsion, blown lift is now super efficient and practical for wider applications.”

Coming on the end of John Langford’s previous eVTOL project, Electra.aero’s new machine is a product of realizations about vertical flight.  “In all the work we did on eVTOL aircraft, I kept coming up with answers about the cost that showed that very short takeoff and landing concepts would have significantly lower costs, and that actual vertical takeoff and landing performance is only required in a narrow set of circumstances and that in most locations space [for STOL operations] is available.” 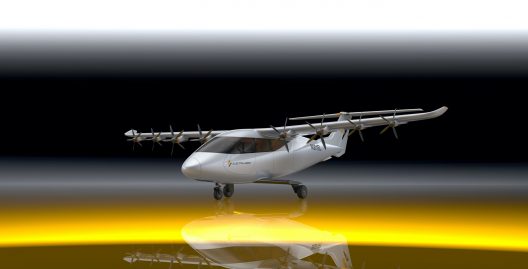 “Electra’s hybrid-electric super-short takeoff and landing aircraft shown here has a wingspan of 48 feet and carries up to seven passengers plus a pilot. The aircraft has 8 electric propellers driven by a hybrid-electric powerplant. This allows the plane to operate out of soccer fields and other constrained spaces like rooftops and parking lots while flying at ranges up to 500 miles. The aircraft is planned to enter commercial service by 2027.”  Electra.Aero caption

The single-pilot aircraft’s eight electric motors are powered by a combination of batteries and a small, quiet turbogenerator.  This means the aircraft does not need to rely on a special charging infrastructure – the batteries are recharged mid-air. Because the airplane carries a smaller battery pack than an eVTOL of similar performance and capacity, Electra’s aircraft provides more room for passengers and cargo.  This results in superior operating economics and minimizes energy consumption.

As with Airflow’s early trials, Electra.aero will rely on a “technology demonstrator.”  To evaluate “optimum short-field performance,” the sub-scale demonstrator will array eight 30 kilowatt (40.2 horsepower) along the leading edge of the wing, and charge batteries with a 100 kilowatt (134 horsepower) engine.  Propellers will be “slow spinning, non-variable pitch.”  Of course, the full-scale aircraft will have a more powerful system.  Langford even sees future possibilities of a 40-passenger model for inter-urban travel.

The initial design could support, “A variety of advanced air mobility missions, including air taxi operations, freight delivery, and logistics in urban, suburban, and rural environments. Its fixed landing gear is being designed for use on unprepared landing strips.”  As your editor has noted before, this would be a great deal like William T. Piper’s vision of a network regional airports, simple strips serving small towns and village in a more rural setting.

Two companies, both changing direction from eVTOLs to eSTOLs make for an interesting vision of rooftop airports and neighborhoods landing zones.  This would certainly make air transport more accessible to millions.