Several electric aircraft graced the flight lines and display tents at Oshkosh this year, while several that had flown in previous years stayed home.  It shows a growing market segment – one apt to continue growing as batteries and components improve.  The ultralight area showed the greatest number of new developments, with two aircraft showing how one might achieve battery-powered flight on a budget.

Several have noted the Aviad MG-12 “ Zigolo” (named after a small bird – not as some surmise, a “gigolo”) from Italy has the look of a Mike Sandlin Basic Ultralight Glider, although it also has elements of other early Part 103 machines and carries a complete aircraft kit price of $14,500.  “Complete” includes a two-stroke, single cylinder Vittorazi Moster 185-cc engine.  $1,500 adds a more advanced BRS ballistic recovery parachute, and another $1,500 nets a more complete, more quickly finished kit.  Aviad claims the basic kit takes only 100 hours to complete, so a more finished option would be nearly ready to fly. 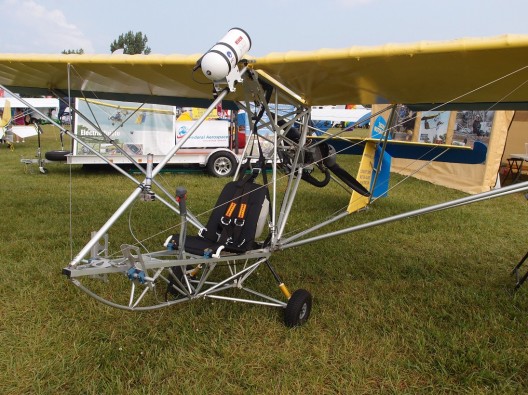 Imported by Chip Erwin, it is one of a stable of three aircraft, each with a specialized mission: besides the MG-12, Erwin fields the Mermaid LSA amphibian and the SC3D LSA – both made in China.  The Zigolo, though, is intended as  a low-cost way to enter sport flying.

As shown in the video, Zigolo flies like an ultralight, and seems to be very stable and a great platform on which to enjoy the open air and the scenery below.  Pilots are protected by the surrounding structure; an impact skid under the pilot’s seat protects against heavy landings and a Comelli pneumatically-actuated ballistic parachute allows a gentle let-down if things truly get out of hand. A simple twist throttle on the control stick modulates the engine’s or motor’s speed, simplifying control and giving a flying motorcycle feel to the proceedings.

An electric motor option under development will add to the overall cost, but the complete airplane will still be priced well under $25,000.  The Agni motor shown at Oshkosh is no longer available through Electravia, Anne Lavrand limiting her business these days to supplying her popular e-Props.  One can still buy a Lynch or Agni motor (virtually the same motor made in different countries) from various suppliers, and find an appropriate controller and batteries for a true do-it-yourself adventure.  One can also look through the options becoming increasingly available, including one on display in the Zigolo tent. 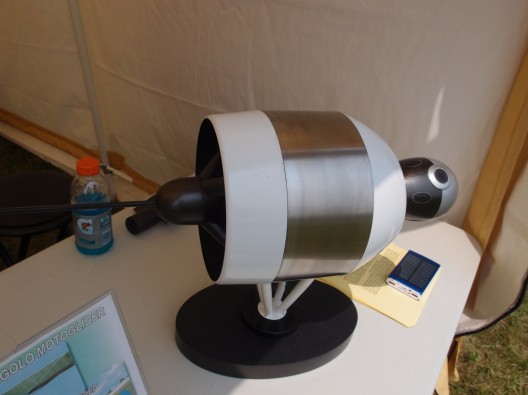 Don Lineback’s concept motor. The shaft running through the motor’s core slides in and out, pivoting the mounts for the propeller blades and providing variable pitch

Donald Lineback, the motor’s designer, hopes to power many different craft with his creation, suitable for a single push or pull propeller configuration, twin or hybrid. The motor package will include the I. C. E. (Internally-Cooled-Electric) Motor, “A true outrunner with a motor controller,” a smart battery with built-in protection and the claimed lowest available weight-to-Amp-hours ratio; a smart charger which can connect to a generator or AC outlet, and a propeller designed for the pitch adjustment capabilities of the motor.

Now under evaluation to determine its production cost, the axial-flux motor runs at maximum efficiency at any RPM, according to Don.  New lithium air (LiO2) batteries are claimed to deliver three times the power of lithium-ion cells, and Don is investigating that claim.

He notes that, “While [overall] airplane sales were scarce at the show – we found nearly 200 people interested in the potential for electric flight.”

Brian Carpenter and the EMG-6

Brian has been developing the EMG-6 for over two years, building a machine that uses wing and tail components from Quicksilver and a purpose-built fuselage that houses the first of probably several electric motors.  He does all the prototyping at his Corning, California hangar and has come up with unique methods of hand-crafting carbon-fiber fairings, extruded foam gap seals, and battery packs fitted to the contours of the passenger seatback. 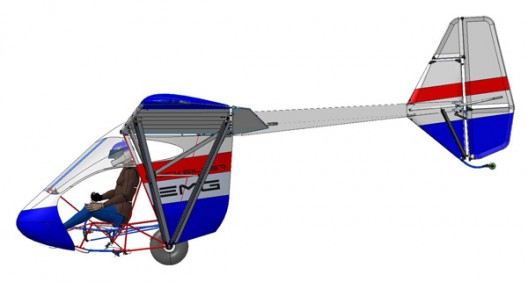 Simple configuration with basic fairings. Builders should familiarize themselves with different regulations regarding different forms of the machine

Showing videos of his 55th and 56th test flights, Brian drew appreciable and appreciative crowds to presentations in the Honda Forum tents. A constantly changing crowd in the ultralight area viewed the machine, with the motor, controller and battery packs on a table near the two prototypes on display highlighting the light weight and compact nature of the sustainer power system.

Adventure Aircraft sells the basic kit requiring some fabrication and welding for $12,000 and a fast-build kit requiring only assembly for $16,000.  Either provides a low-cost entrée to ultralight, Experimental Amateur Built (EAB) gliding, but neither includes a power system.  As with the MG-12, the EMG-6 would require only about 100 hours to complete a ready-to-fly aircraft.  As Brian finishes work on the power system, those components will become available.

In the meantime, builders wanting to get a head start can download plans  on a subscription basis and rent building jigs for the welded parts of the fuselage to simplify even the most labor-intense approach to getting a completed machine.  Brian claims, “Between 25% to 40% of the aircraft’s total cost could be saved depending on your capability.”

The builder can start construction with “a minimal cost outlay,” and under one plan, purchase components individually or as complete subassembly kits “depending on budgetary constraints.” 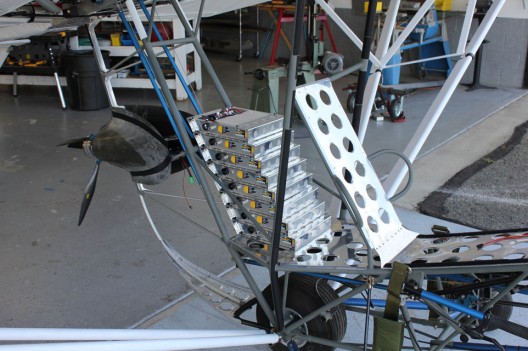 With machines on the field powered by a variety of electric powerplants and possessing a wide range of sophistication and performance, AirVenture 2014 offered a world of electric flight possibilities.