Many of us dream of retiring and pursuing the dreams that sustained us during our careers.  One man has done that with the kind of work ethic that makes retirement highly productive.  He maintains two web sites; a Yahoo group dedicated to his latest homebuilt electric sailplane, and a more inclusive overview of his many aeronautical projects.

Jerry Booker took early retirement from the architectural technology profession, and having grown up on a farm, “enjoyed ‘green’ living, with a lot of physical activity, and now [lives] in the farm country in central Illinois.”

Designing and building even a simple airplane is a task that requires the willingness to learn and explore new ideas, and if that craft includes an electric powerplant, a willingness to experiment at a fairly high level.  Jerry reports, “I always had an interest in research, design, and development, and am mostly self-educated from reading and trying things.

“In addition to Alex Strojnik, I got a lot from the late Stan Hall’s writings, and from the late Bob ‘Veedubber’ Hoover  whose writings inspired me to write about my projects, to try to pass on some knowledge and experience.”

He does not seek publicity for himself or his work, “As there is no intention of my efforts leading to a business endeavor on my part. I just want to show there is a way that a home-builder can put together a Part 103-compliant, electric powered self-launching, sailplane, and then maybe somehow help others who have a serious intent in doing something similar.” 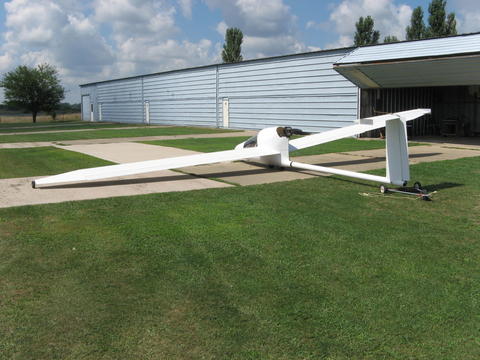 The clean and slender lines of the Red Tail Hawk

Booker’s Red Tail Hawk is a slender ultralight motorglider, a reflection of the writings of the late Dr. Strojnik.  Jerry decided to power it with Randall Fishman’s motor package, not wanting to reinvent that wheel, and finding the right combination of weight and power for his purposes.  He uses model airplane battery packs and model aircraft and bicycle technology to monitor flight parameters and motor operation.  He was kind enough to respond to questions regarding his sailplane.
CAFE: Were you working with EagleTree for monitoring motor parameters?

JB: I bought an EagleTree Glide unit to use on my RC sailplanes, which can work as a remote variometer and as a data logger, and I think it might be good for gathering some very useful data when installed on the RTH. I have it set up for the RTH to log elapsed time, airspeed, and altitude, but haven’t tried it yet. The altitude is supposed to be accurate to one foot. That info should provide enough data to calculate the gliding performance of the RTH.

However the EagleTree motor monitoring does not go up to the voltage I am running at on the RTH so it won’t be hooked up to any of that.  I have a Cycle Analyst, for electric bicycles, to monitor the battery output, motor rpm, etc.

CAFE: There is much of the model airplane world that comes close to a range just right for ultralight electric sailplanes.

JB: I agree. I’m using RC battery packs to power the RTH. That idea came from Mark Beierle of Earthstar Aircraft, who has been flying with them for a while. And I have several RC items that I use for the battery charging process.

CAFE: You also went from a retractable motor mount to a fixed on with a revised turtle deck. Comments on why?

JB: I never did have the retractable motor actually rigged up, but was going in that direction. But I decided it was too complicated, maybe too unreliable, and probably too heavy, so went with the taller turtle deck to fair in the motor. I could still give it a try sometime after I get more experience flying the RTH. 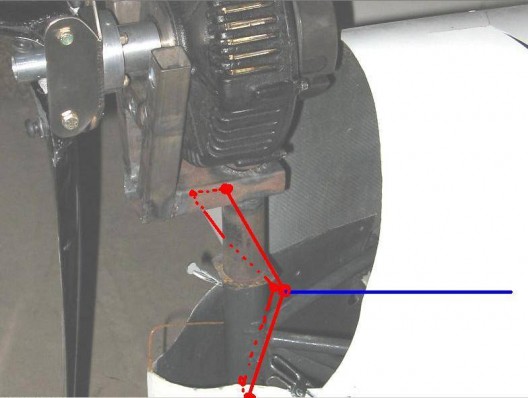 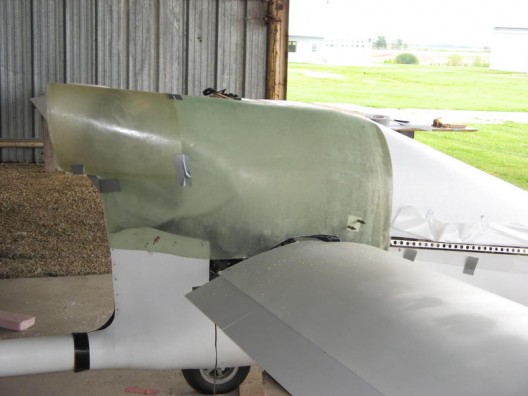 CAFE: You’re still using the Randall Fishman motor, but hint at going to Yuneec. What do you see as the advantages of making that change?

JB: The only thing that attracted me to the Yuneec package was the lighter weight of it all. I don’t know about the cost or the reliability of it. I’m satisfied with Randall’s proven ElectraFlyer package and will stick with that for now. And he has a new lighter motor as standard now too.

CAFE: Could you discuss the issues you found in doing it yourself in installing the motor and operating it so far?

JB: The biggest issue in buying a proven, complete power package is that it saved me probably a couple of years of “trial and error” trying to come up with my own combination that worked and was reliable. Probably saved me money too, because the “error” part of the trial and error method can get very expensive when dealing with this kind of stuff.

Operating the electric power system is a dream, compared to tying to fly the RTH with a small single cylinder 2-stroke engine, which tried to shake the poor thing to pieces. Now I just get in, all is quiet as I go through my checklist. When ready, open the “throttle”, which starts the motor spinning, the propeller unfolds, and away I go.

Charging the battery pack is still a big issue though. I still need to monitor it closely, but I’m quite sure that will improve shortly as new chargers and balancers for these big RC-based battery packs come along, several are being developed by some folks on the Endless Sphere e-bike forum. 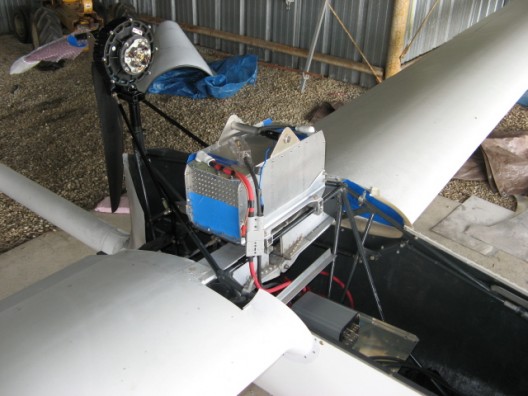 Jerry Booker’s other projects include the Blue Tail Hawk, a two-cylinder 1/3 Corvair ultralight engine conversion, and the Yellow Tail Hawk, a design in progress for a STOL ultralight.  Motor and flight testing will continue on Red Tail Hawk and will be updated here as new information becomes available.