After the fatal crash of a UPS Boeing 747-400F in Dubai in September 2010, United Arab Emirates investigators “determined that a large fire developed in the palletized cargo on the ‘Class E’ main deck in an area that included ‘a significant number of lithium-based batteries and other combustible materials,’” according to the Aviation Week report.  That fire had filled the flight deck with smoke within three minutes of its detection and the intense heat had damaged aircraft control systems. 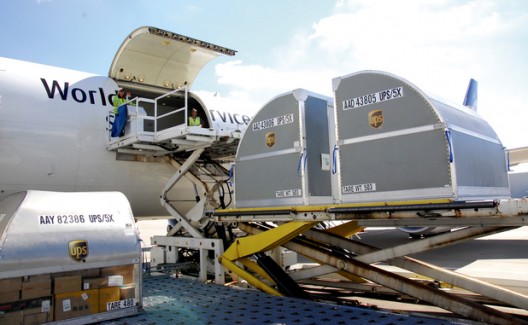 MACRO Industries of Huntsville, Alabama makes composite armor for military vehicles.  Their MacroLite panels are half the weight of aluminum and provide superior fire protection.    UPS looked at this material as part of a study by the UPS Independent Pilots Association (IPA) fire safety task force’s efforts to eliminate the dangers that lithium battery fires could pose to aircraft.

Tests simulating a “Class A fire load” showed that MacroLite could contain internal temperatures of 1,370° Fahrenheit, generated by 90 boxes filled with 2.5 pounds each of shredded paper and ignited by a nichrome wire – equivalent to a “large-scale lithium battery fire caused by thermal runaway.”  Added testing show the containers can confine an internal fire of 1,200° F for four hours.

“When you look at statistics, pilots now have only 19 minutes, on average, after a fire breaks out to get more info

that aircraft safely on the ground,” says Bob Brown, a UPS captain and member of the IPA task force.

UPS made an initial order for 100 MacroLite containers.  After the containers survived 13,000 revenue flights over one year, UPS determined they were “virtually indestructible, with no differences in loading and unloading.”  Although they cost more than legacy models, UPS feels the added expense is offset by weight savings and reduced maintenance.

MacroLite sells sheets of its compressed composite materials, a 4-foot by 8-foot panel of its 5/16-inch thick material priced at $600.  Such a piece could make a large number of light aircraft battery boxes. 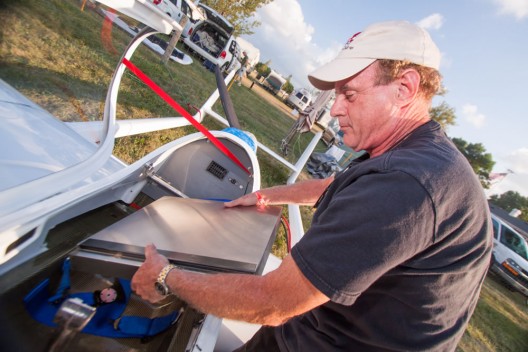 Randall Fishman of ElectaFlyer displays the stainless steel battery container on his ULS ultralight. A similar MacroLite box could be lighter, according to its makers

UPS is not content to test only one fire-containment material.  For palletized loads, the type often carried with boxes of lithium batteries stacked in a large square, “UPS is testing fire-containment covers built by AmSafe.”   These soft covers can confine a fire up to 1,500° F for up to four hours, and are rugged enough to allow their loads being picked up with forklifts. Such toughness also helps physically restrain otherwise loose cartons.  The first 575 trial covers are being used on 17 “lanes” out of Asia for large lithium battery shipments and have completed more than 3,000 flights.

Weight saving and extreme fire resistance are a good combination on any aircraft, adding to the overall safety of flight.

Those visiting the MACRO web site may be impressed with the four-rotor vertical takeoff and landing machine shown there.  We’ll be back to visit that soon, along with the company’s rather complete history of flying cars.