Henry Ford once brought a French metallurgist to Detroit, part of his plan to build cars with lighter, stronger steel.  Vanadium, which the French used in their automobiles, offered him the chance to make the Model T lighter and stronger, and its part in the car’s alloyed steel gave the Model T the longevity which followed it through one of the longest production runs in history.

Now battery researchers are looking at another quality of this mineral, its ability to form a superior cathode for batteries that “could supply both high energy density and significant power density.   Combined with graphene, the wonder material du jour, vanadium oxide (VO2) could couple longevity echoing the Model T’s with charge and discharge rapidity similar to a supercapacitors.

Materials scientist Pulickel Ajayan at Rice University created ribbons of vanadium oxide (VO2) thousands of times thinner than a sheet of paper, and combined those with atom-thick ribbons of graphene to form cathodes which were built into half-cells for testing.  These “could be fully charged and discharged in 20 seconds and retained more than 90 percent of their initial capacity after more than 1,000 cycles,” according to the University.

Made from relatively abundant and inexpensive materials, the ribbons are made using a “simple hydrothermal process” that could be scaled for greater output.

Ajayan predicts “This is the direction battery research is going, not only for something with high energy density but also high power density. It’s somewhere between a battery and a supercapacitor.”

Ajayan overcame the slow charging and discharging of batteries made with vanadium pentoxide by baking the high-conductivity graphene lattice into the vanadium ribbons.  This three-dimensional form serves “as a speedy conduit for electrons and channels for ions.”  The three-dimensional construct and lattice-like formation suggest a structure similar to that of Amy Prieto’s battery at Colorado State University, which uses a 3-D foam to accelerate the rate of lithium transfer. 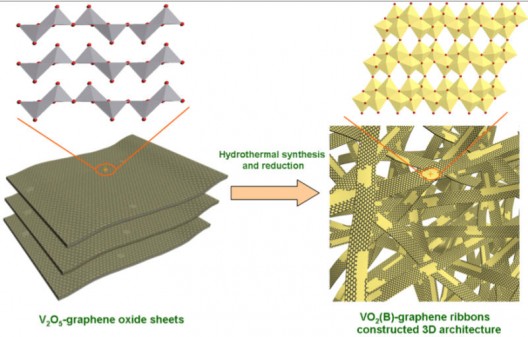 The batteries may end up smaller than other lithium cells, too.  The University explains, “The atom-thin graphene sheets bound to the crystals take up very little bulk. In the best samples made at Rice, fully 84 percent of the cathode’s weight was the lithium-slurping VO2, which held 204 milliamp hours of energy per gram. The researchers, led by Rice graduate student Yongji Gong and lead author Shubin Yang, said they believe that to be among the best overall performance ever seen for lithium-ion battery electrodes.”

“These ribbons were the building blocks of the three-dimensional architecture,” Yang said. “This unique structure was favorable for the ultrafast diffusion of both lithium ions and electrons during charge and discharge processes. It was the key to the achievement of excellent electrochemical performance.”

The unique configuration helps speed up charging and discharging, combining the energy density of batteries with the power density of supercapacitors

The work was funded by the U.S. Army Research Office and the Office of Naval Research through a Multidisciplinary University Research Initiative grant and a National Science Foundation Graduate Research Fellowship grant.

Read the abstract at the Nano Letters web site.