People waste billions of hours sitting on roads worldwide each year. We envision a future where commuting by eVTOL (electric Vertical Takeoff and Landing) is a safer, faster, and cost-competitive alternative to ground transportation. We have spent the last ten years developing the technologies that have made our full-scale technical demonstrator possible and are now ready to build a commercial version of the aircraft. We’re excited to have attracted the backing of leaders in auto manufacturing, data intelligence, and transportation sectors.

A Knack for Making and Attracting Money

JoeBen Bevirt has been thinking boundless thoughts for most of his life, based on a highly creative output that includes GorillaPod flexible photographic tripods, energy-gathering kites, electric motors, and advanced aerodynamic designs.  From his sylvan home above the California coastline, he has expanded his work into the currently hot sky taxi realm.

This is nothing new for him.  He crafted motors for the Monarch Personal Air Vehicle (PAV), a planned single-person commuter craft, seven years ago.  The eight Joby motors, mounted on a pivoting wing based on the Windward Performance SparrowHawk sailplane, would have taken its passenger 100 miles for $1.00 of electricity.

More recently, his company has fielded a two-seat, 12-motor commuter, a drone with folding propellers, and motor, nacelle, and wing work for NASA’s X-57 Maxwell.  The small lift motors are designed to maintain airflow over the wings, while the two “cruise” motors provide thrust for forward flight and economical cruising.  The cruise motors are currently being tested on NASA’s Airvolt test stand at the Armstrong Flight Research Center, Edwards Air Force Base.

Undisclosed is the Word of the Day

In a Bloomberg News article about Joby’s recent acquisition of $130 million in venture capital, Ashlee Vance and Brad Stone were allowed to visit but not photograph, JoeBen’s undisclosed airfield somewhere between Monterey and Santa Barbara.  They discretely report on the appearance of the airplane: “It’s an exotic-looking white aircraft with numerous propellers. (Bevirt agreed to the visit only on the condition that physical specifics remain unpublished.) He calls it an air taxi. “This is what I have been dreaming about for 40 years,” he says. “It’s the culmination of my life’s work.” 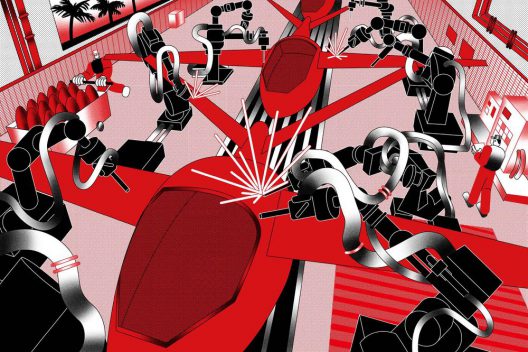 Although they didn’t bring back footage or other images, someone at Bloomberg illustrated the article with a production line for aircraft that look similar to Joby’s S2.  Technical papers by JoeBen, Alex Stoll and others show common designs for VTOL craft and low-drag nacelles that look remarkably like those on the Maxwell and S2.  This underlies Joby’s reference to 10 years’ of ongoing research.

“We were the first two reporters to see a demo of the prototype, named Rachel after the women several of its creators used to date.  (They were all named Rachel?) The pilot managed a vertical takeoff, 15 minutes of flight in a 15-mile loop, and a safe landing.  (Italics your editor’s.)  Perhaps that’s why the reporters added this note: “And though Intel owns a stake in a German air taxi startup called Volocopter GmbH, Wendell Brooks, president of Intel Capital, says Joby “is very far ahead relative to all the other things we’ve seen.”

Joby Executive Chairman Paul Sciarra, a co-founder of Pinterest, explains that Joby seeks to build a four-passenger, one-pilot machine that will cruise 150 miles on a single charge, be 100 times quieter than conventional helicopters on takeoff and landing, and “near silent during flyovers.”

Joby has one of four competing visions for repurposing an abandoned cement plant in Davenport, California, about 11 miles north of Santa Cruz.  Their presentation for approval of their plan can be seen here.

Along with this potential acquisition, Joby plans on hiring 100 additional employees (to augment the 135 already on board) with skills essential to their enterprise.  Going from creating flexible tripods to crafting motors and innovative aerodynamics with NASA, Joby seems destined for some remarkable achievements in future flight.