Calbraith Perry Rodgers, the first person to fly across the United States, was deaf from an early childhood disease.  Even though he came from a long line of naval heroes, this handicap kept him from joining the Navy, but didn’t slow his quest for adventure.  He was one of the first to sign up for flying lessons with the Wright Brothers at their home base in Ohio.

He was 31 years old when William Randolph Hearst offered a $50,000 prize to the first aviator to fly coast-to-coast in 30 days or less.  Rodgers convinced the Armour Meat Packing Company to sponsor his attempt as a promotion for their new soft drink, Vin Fiz.  As a coincidence, your editor visited the Hiller Aviation Museum a few weeks ago, and they have a beautiful replica of the Wright Model EX in Vin Fiz markings, just as it looked when Rodgers set out from Sheepshead Bay, Long Island, New York, on September 17, 1911. 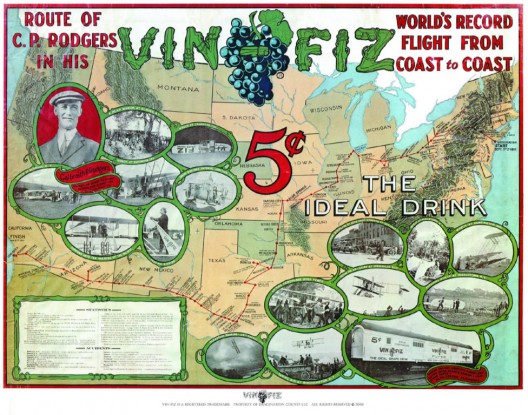 A period map showing the voyage of the Vin Fiz.  The rail car carried the many spare parts required on the crossing

The airplane was not pristine for long.  Within a day, he crashed and wrecked the airplane.  It required the first of several rebuilds, “And this was only the first of five major crashes, two engine explosions, and dozens of minor incidents.”  His deafness possibly contributed to some accidents because of his inability to hear his engine.  There were no instruments – not even a compass – and Cal followed railroads when all other cues failed. 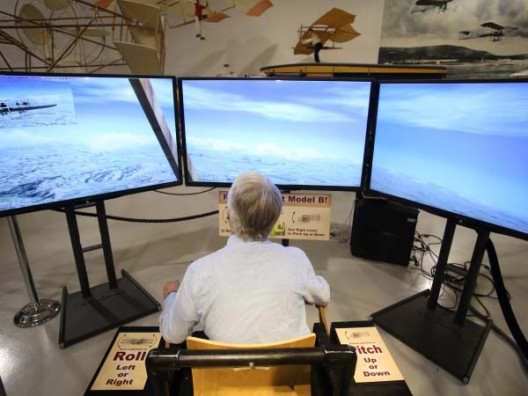 Visitors can “fly” Vin Fiz on a three-screen simulator. Push and pull the right stick to go up and down, the left stick to go right and left.  For a stick and rudder pilot, this is a challenge

Arriving at Long Beach, California on December 10, 1911, he was only 54 days late to collect the Hearst prize, but did win the admiration of the 50,000 on hand to see him land on the beach – very little of the original craft finishing the trip with him.  What he lacked in a reliable airplane he made up for in sheer perseverance.  Rodgers’ gravestone reads, “I endure.  I conquer.”

Solar Impulse had just set out for Phoenix when your editor made it to the Bay Area.  It’s of interest that Bertrand Piccard and Andre’ Borschberg made a homage to Cal Rogers in the report of their flight across America. 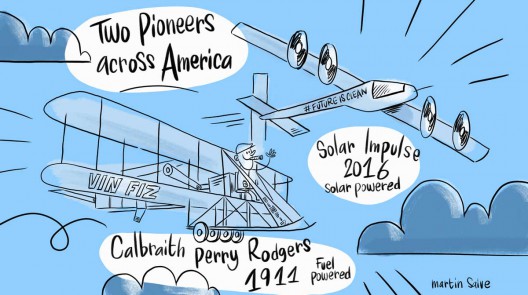 Rodgers was a pioneer, just as Piccard and Borschberg are today.  They all share the desire for a better future and the willingness to follow their dreams against all challenges.