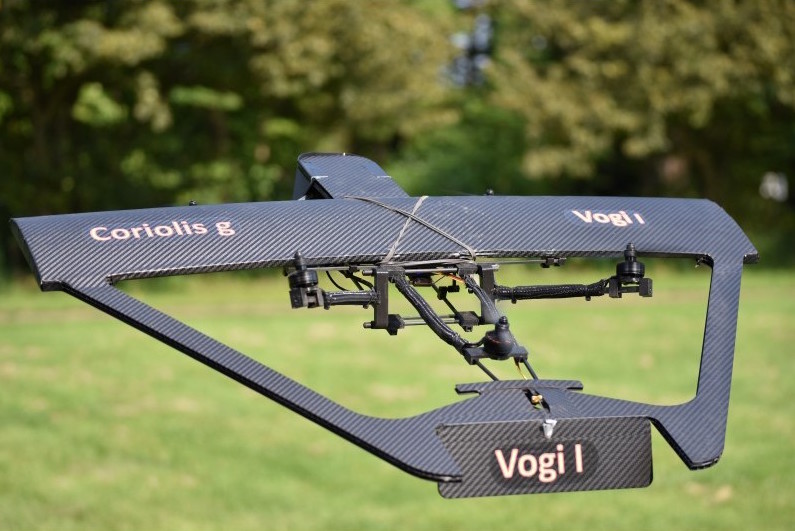 Canadian startup, the Coriolis g Corporation, defies the rules of classification with its Vogi 1 “passively coupled VTOL tiltrotor,” which the company describes as “a tilting quadrotor passively coupled to a winged airframe via a swivel mechanism”.

The Vogi 1 has demonstrated a novel design solution to achieve the maneuverability and vertical takeoff and landing (VTOL) capabilities of a traditional quadcopter with the efficiency of a traditional winged aircraft.  Its design allows passive transition from vertical flight or hovering to winged horizontal flight.  It does so without the benefit of algorithms or triple-redundancy controllers.  Coriolis g explains, “Without any active logic, the rotors pivot and swing from parallel to the ground to perpendicular, located above and below the wing.”  Note its ability to push backwards from a vertical dive at about the 1:20 point in the video.

An on-board camera view captures a close-up of what’s happening, but not necessarily how it’s happening.  Reader can get a better idea by turning to Coriolis g’s white paper describing in reasonable detail how they pulled it off.

Designers selected possible combinations of traditional configurations, which they classified as Tilt Rotor (TR), Tilt Wing (TW), Tail Sitter (TS), and Quadraplane (QP).  Coriolis’ designers chose a combination they call, “Pitch-Decoupled Tilt Rotor The solution we have developed is a disruptive departure from all existing designs.

“We propose a system that decouples the pitch rotation of the thrusters from the fixed wing frame thus allowing independent pitch rotation of the two airframes relative to each other. By decoupling the pitch frames of the two ’aircraft’ we can transition from VTOL to FW flight in a naturally stable manner and furthermore use the vertical thrusters as forward thrusters during winged flight. By decoupling the two stable systems we alleviate the risk of instability during transition and improve recovery from failure modes. The design also has a reduced number of moving parts and would be much easier to maintain than other tilt-rotor solutions considered to date.  Although it may be classified as tilt rotor system, the dynamic and operational characteristics are sufficiently different from the traditional actuated Tilt Rotor and this new approach is hereby classified as a new Pitch-Decoupled Tilt Rotor or alternatively Passively-Coupled Tilt Rotor.”

By having a fixed wing, Vogi 1 can fly faster than an ordinary quadrotor and achieve a greater range.  Even though the aircraft’s weight is greater because of the addition of a wing, the performance gains seem to offset the added mass.  Coriolis g points out, “This especially pays off during longer flights, where takeoff is an increasingly small percentage of the total flight, thereby taking advantage of the lifting surface for a greater fraction of the flight time.”

Vogi’s design allows for a cross between hovering and slow flight the designers call “loitering,” a low thrust exercise that uses little energy and enables an almost stationary persistence above a chosen site.  This would seem to make Vogi an ideal candidate for reconnaissance missions.

Because only the propulsion system pivots “to achieve the desired thrust vector, the fuselage does not rotate.”  Since passengers would stay in a constantly level frame of reference, the flight experience will be calmer.

It will be fascinating to see how Vogi’s makers translate their stable, but highly aerobatic machine into a people carrier.