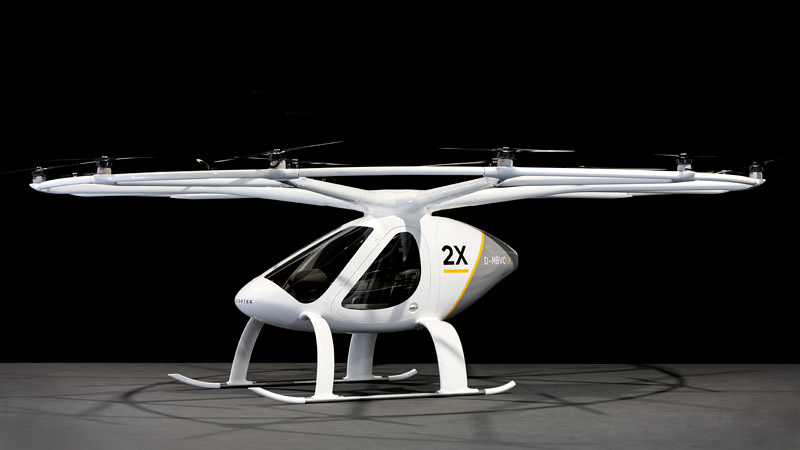 Dubai, already having penned a similar agreement with China’s eHang, will start test runs of autonomous air taxis in 2017 with the Volocopter.

Volocopter has had an eventful year, introducing its latest model, the 2X, at this year’s Friedrichshafen Aero E-Flight Expo and opening its new corporate headquarters.  Now, it looks forward to demonstrating its craft in regular service.  e-Volo writes, “Our vision becomes reality: Dubai’s government “Roads and Transport Authority” (RTA) has signed an agreement with us regarding the regular test mode of Autonomous Air Taxis (AAT) in the emirate. The test will start in the fourth quarter of 2017, and the project has been scheduled to run for five years.”

The Volocopter 2X, according to its makers, is simply foolproof, having 100 microprocessors and a large number of sensors helping maintain vehicle stability, even in turbulence.  Volocopter has demonstrated hands-free flight on several occasions.

Stability is part of its safety factor, and 18 rotors with compensating mechanisms ensure that the Volocopter can maintain flight even with several motors out of commission.  Nine battery packs and controllers allow continued operation even with the loss of one.  If all else fails, a ballistic parachute (“for incorrigible pessimists”) enables the occupants’ descent “to the ground, very gently, still securely seated in the aircraft.” 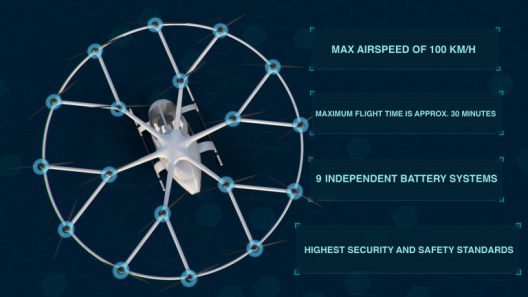 Simplicity and safety complement the green operation its makers claim for Volocopter, looking beyond its current state of pollution-free flight to improved batteries, longer range and increased utility.  All these factors will get a good workout in the skies between skyscrapers.  E-Volo looks forward to the challenge.  “Now this technology will experience further testing in Dubai under extreme climatic conditions. We see Dubai as the pioneer for a huge evolving market and are convinced that many other metropolitan areas will follow.”

The Verge notes that Dubai is, “A testing ground for some of the transportation world’s more futuristic and outlandish ideas.”  Tests start in the fourth quarter of 2017, and are scheduled to last five years.  Alexander Zosel, co-founder of Volocopter, said, “We are very grateful and proud that the RTA has selected us as their partner after rigorous testing,” adding that his company’s “stringent safety standards” were one of the reasons for that selection.

Volocopter’s prototype VC200 took its first crewed flight last year. And at Europe’s largest general aviation trade fair earlier this year, the company revealed its first production model: the 2X. It has a maximum range of 17 miles when flying at a speed of 43 mph. Its maximum flight time is 27 minutes at an optimal cruise speed of 31 mph, but if range were no concern, the 2X can fly at a maximum speed of 62 mph.

Volocopter 2X and the eHang 184

The Verge elaborated that, “Volocopter won’t be the only flying taxi service buzzing through Dubai’s airspace. RTA also recently struck a deal with the Chinese drone company Ehang to test its single-person quadcopter as a transit alternative. Uber is also in talks with the emirate city to publicly demonstrate its own flying taxi service in 2020. And if flying through the air in an autonomous drone isn’t your bag, perhaps you’d be more interested in tube-based travel: Dubai is working with LA-based startup Hyperloop One to build the world’s first passenger-ready hyperloop.”

The English Publication, The Engineer, gives a few technical points.  “Designed and built in Germany, the Volocopter can fly autonomously using 18 individual rotors powered by nine swappable batteries. The aircraft has a top speed of 100km/h [62 mph] and maximum flight time of around 30 minutes.”  If all goes well, RTA looks forward to seeing a quarter of all trips in Dubai carried out by autonomous transport by 2030.

His Excellency Mattar Al Tayer, Director-General and Chairman of the Board of Executive Directors of RTA, explains RTA’s role in the tests. “The RTA is working with the Dubai Civil Aviation Authority to develop the legislative and operational guidelines, define specifications and standards applicable to operators in the emirate such that these legislations will be ready. It is noteworthy that the operational and legislative structures will be the first of their kind worldwide.”

Earlier this year, Chinese company eHang signed an agreement with the RTA to begin testing their single-seat 184 as an on-call aerial taxi.  Since the two vehicles carry different payloads and have similar vertical takeoff and landing capabilities, comparisons will doubtless be made, but both will have to demonstrate reliable operation under the Dubai sun.

And on the Waterfront?

Kittyhawk Aero recently demonstrated its Flyer for an appreciative San Francisco audience.  It made your editor wonder if Kittyhawk could provide low-altitude commutes to one’s private island four kilometers from the central city, while e-Volo and eHang stage a friendly competition above.  The “select few” who prosper in this rich city will probably jump on board.  Warning: a real-estate pitch follows – but also provides a glimpse of what it would be like to fly over and through this astounding city.