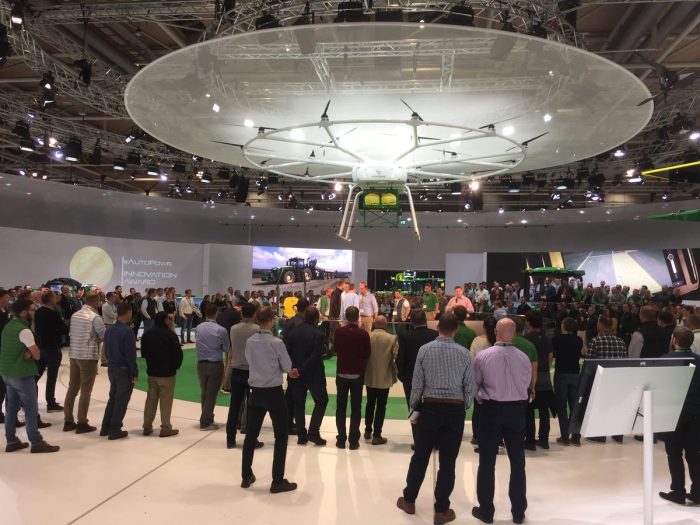 We usually think of farming as a back-to-the-earth, humble enterprise, eschewing urban sophistication for rural simplicity.  Volocopter, the height of such urbanity, and John Deere, its green and yellow tractors shearing suburban lawns and its giant combines harvesting wheat fields worldwide, are blurring those lines with the VoloDrone, an agricultural implement like no other.

The largest John Deere combines weigh over 30,000 pounds (13,608 kilograms), while the most a Volocopter can carry is around 440 pounds (200 kilograms).   This disparity can seem heavily on the side of brutish strength, but agility and finesse also play a part in farming.

Unveiled at the aptly named Future Technology Zone in Hall 13 at Agritechnica in Hanover, Germany, a demonstrator model of the VoloDrone equipped with a crop protection sprayer hung over the John Deere exhibit.  Those 200 kilos of potent spray can cover a large area.  With autonomous possibilities, the machine is not a threat to anything but the bugs or weeds it attacks.  The joint press release notes, “The VoloDrone is able to cover an enormous area, especially under difficult operating conditions.”

Click here to take a virtual reality tour of Agritechnica, and then watch the following video for the profound changes coming to a formerly low-technology occupation.

John Deere, bringing its agricultural expertise and Volocopter its large drone skills, have crafted a multi-functional vehicle with a variety of farm applications, with related options for construction and other heavy-lift uses.

As with its passenger-carrying cousin, Volodrone’s 18 rotors and lithium batteries allows 30-minutes trips, with remote and automatic operation on a pre-programmed route an option.

Its frame, equipped with a “flexible payload attachment system, can mount different devices.  It can carry two-large-capacity tanks, a pump, and a spray bar, for instance, for crop protection.

Because of its low flight altitude, the makers claim the VoloDrone has the ability to cover up to six hectares (14.83 acres) per hour.  It should be significantly less expensive to operate than a conventional crop duster/sprayer aircraft, which need large engines to lift large amounts of material.  Additionally, “This makes the VoloDrone a sustainable, precise, and cost-effective alternative to helicopters. Due to the system’s high flexibility and GPS control, more selective area-specific treatments are also possible.”

Appropriate flight and application tests will be carried out with the demonstrator VoloDrone sprayer over the next growing season.

Further information on John Deere and Volocopter can be found at www.deere.de and www.volocopter.com.  Following, view a John Deere farming aid using a much smaller drone.

Volodrone is a relatively simple solution to many farming problems.  Going into more complex realms, even satellites help the modern farmer.  A combine, for instance, is a huge, complex machine.  In the past, all these harvesters were manually controlled, but the modern farmer has bushels of technology to gain better crop yields while protecting the land. 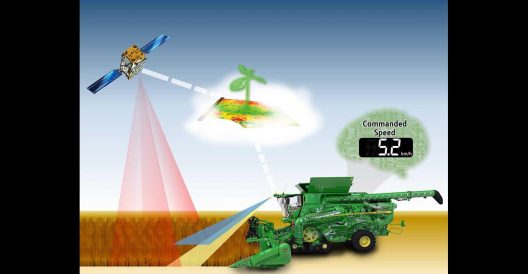 “Throughput controllers on combine harvesters cannot react to changes in the harvested crop conditions until the material is already in the harvesting header, in the intake duct or in the threshing unit. With extreme changes in harvesting conditions, such as lying crops, partial gaps and weed areas, result in correspondingly high over- or under-loading, and combine driving speeds that change too drastically. The throughput controller is then often deactivated.

“John Deere solves this problem with the proactive throughput controller. 3D stereo cameras detect the crop situation in front of the combine just like a proactive driver. Crop heights, lying crop with lying direction, gaps, driving lanes and harvested areas are detected and classified by so-called “machine learning”. In addition, the system also uses the data of vegetation models, which consist of biomass maps generated via satellite or other technologies. Camera and biomass signals can also be used alone in each case. As soon as the combine harvester begins harvesting, the system calculates regression models from the real-time and the geo-referenced vegetation data. The harvesting conditions in front of the machine are therefore known, as are the strategies still specified by the driver. The combine harvester merges all sensor values and then adjusts its driving speed and its settings to the harvest situation.