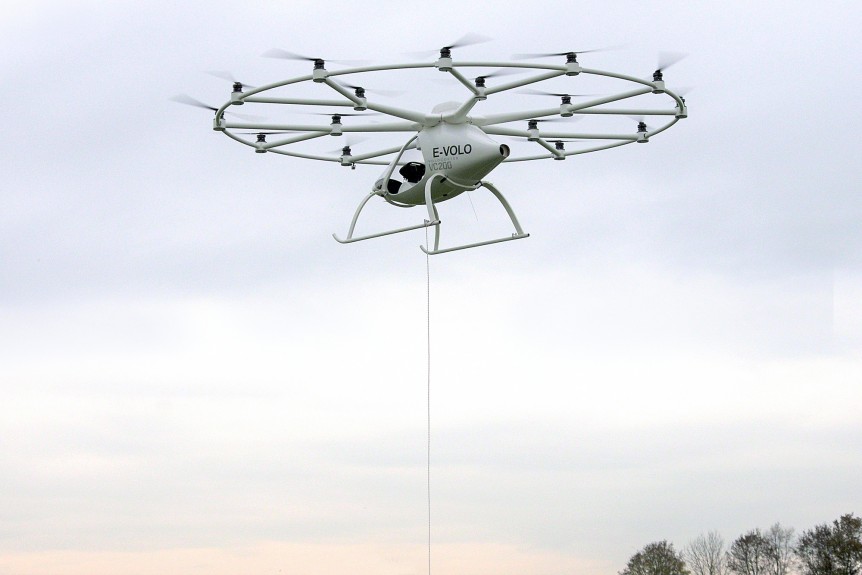 With China certifying its RX1E two-seat electric trainer recently, Germany beats the rest of the world to electric rotary-wing certification with its provisional certificate for the VC200 Volocopter as an ultralight aircraft – certificate number VVZ, registration D-MYVC.  This will allow the German Ultralight Flight Association (DULV) to continue testing the vehicle, a program in place since 2013.  Testing has been done on behalf of the Federal Ministry of Transport and Digital Infrastructure – a telling name for the organization since the German government feels a strong digital infrastructure is necessary to efficient operation of all transportation. 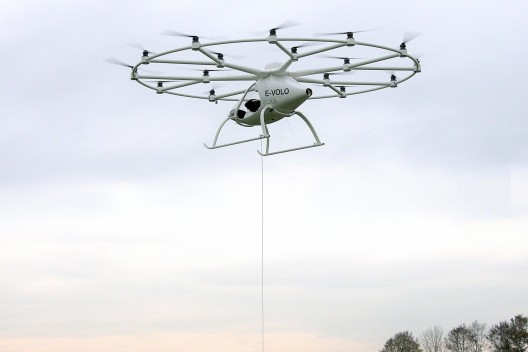 Further testing will lead to certification of the VC200 as an ultralight prototype and, following successful completion of testing, to series production.

Volocopter’s 18 lifting rotors, each powered by a small outrunner motor, require 45 kilowatts to hover, “depending on the air pressure / temperature,” according to e-Volo GmbH.  Multiply redundant systems ensure stability, “even if parts of the system were to fail,” a principle employed “in all system components that are necessary for safe flights.”  Since all propellers are fixed-pitch units, rotation speed of each motor produces whatever differential thrust occurs. 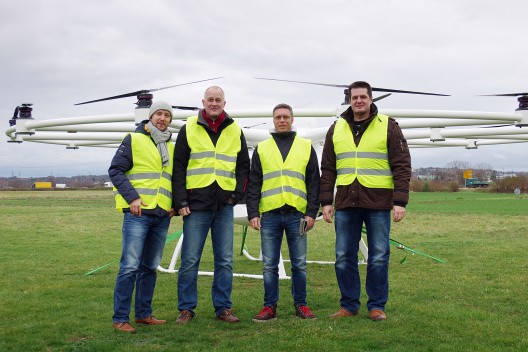 Control comes from a single joystick, much like that used in computer games.  Considering that future pilots will probably have a great deal of experience with such controls, this seems like a good approach to make flight controls almost intuitive.  Whether people will flock to aerial commuters that allow personal control, or will choose automated flight as promised by a similar vehicle, the eHang 184, remains to be seen.  Each will probably have its adherents: control freaks happy to guide their own aerial destinies and those who overcome their anxiety about being airborne also overcoming their anxiety about trusting an invisible pilot to get them safely to their destination.

Much of the testing on the VC200 was done with the craft unoccupied, over 100 flights made to have the aircraft certified for unmanned flights.  “With professional remote control,” the e-volo team was able “to conduct stress tests on the entire system, its different modules, and the individual components.”  This included switching off motors, disconnecting some batteries or flight control electronics – even feeding wrong information to the system from “defective” sensors.  All the real and simulated issues were dealt with successfully.  Other sources of mayhem, such as turbulent weather, did not seem to faze the machine.

Jörg Seewald, the association’s representative for the test program, along with e-volo’s team, were “extremely impressed” by test outcomes.  The VC200 was apparently able to compensate for the loss of rotors and was able to stabilize itself in turbulence without a pilot’s intervention, good news for future white-knuckle or possible ham-handed fliers.

Several elements in the design of the aircraft help to alleviate squeezing the controls too much.  E-volo explains the safety factors in the system. “The flight control system comprises…  several completely independent units. Each flight control unit contains a complete set of positioning sensors that consist of pressure gauges, gyroscopes, accelerometers, and magnetometers for all three spatial axes. Theoretically, each of the flight control units can control the VC200 independently. The Volocopter is operated with one hand using a joystick. The pilot intuitively controls all flight axes through rotational movements of the joystick’s axis. Rising and falling commands are given through an altitude control thumb button. In order to land, the pilot only needs to press and hold the button down until the Volocopter is on the ground. Once it nears the ground, the control system automatically slows down the Volocopter to ensure a gentle landing.” 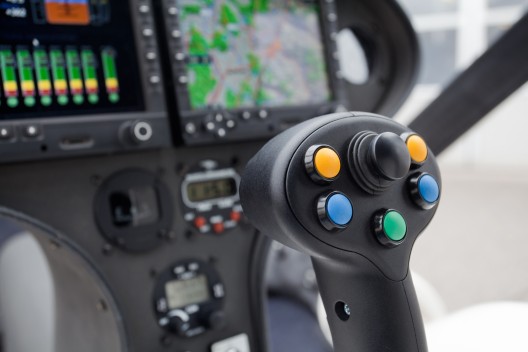 As seen in the video above, e-volo plans on expanding their product line in manned and unmanned flight.

Update: Kathrin Mohr of Volocopter notes that earlier translations of the German press release may have given the impression that piloted test flights had already taken place.  The corrected language follows:

“The manned test flights are planned in three phases. In the first phase, the test flights will be at low altitudes and restricted to a maximum flight speed of 25 km/h. In the second phase, the emphasis will be on flight maneuvers with a flight speed of up to 50 km/h at an average altitude. The third phase is aimed to validate the system at higher altitudes and in the full speed range of the VC200 (up to 100 km/h).”