Helena Treeck from Volocopter sent the following message this morning:

“Bruchsal/Paris/Singapore, October 2018 – Volocopter, the pioneer in urban air mobility, announced today during Autonomy – the Summit of Urban Mobility in Paris, that they will perform a next set of inner urban flight tests in Singapore. The series of test that are scheduled to take place in the second half of 2019 are supported by the Ministry of Transport (MOT), Civil Aviation Authority of Singapore (CAAS), and Economic Development Board (EDB).” 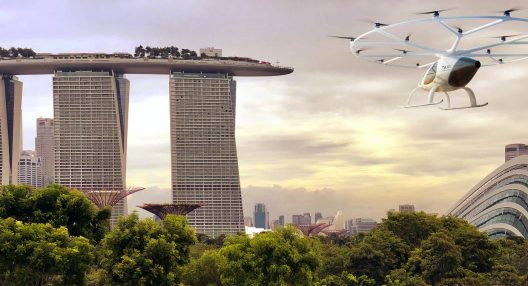 Already undergoing testing in Germany and Dubai, Volocopter’s 2X appears to be the company’s flagship for continuing development.  The following video (in French) intercuts a representative explaining the benefits of the Volocopter with images of its public flight testing in Dubai.  There are apparently less well-publicized tests in the nearby desert and ongoing development in Germany.

Ms. Treeck’s press released provides more goals.  “These flight tests are designed to validate and verify the ability of Volocopter’s eVTOL vehicles to operate in Singapore’s urban environment and will culminate in public demo flights. Volocopter and CAAS will work together to establish the scope of the flight trials and ensure that the necessary requirements are met before flight tests are allowed to commence. In addition to the flight tests, Volocopter will be setting up a product design and engineering team in Singapore to support its expansion plans. They are also looking for real-estate developers, mobility providers and businesses ready to join their quest to enable air taxis in Singapore.” 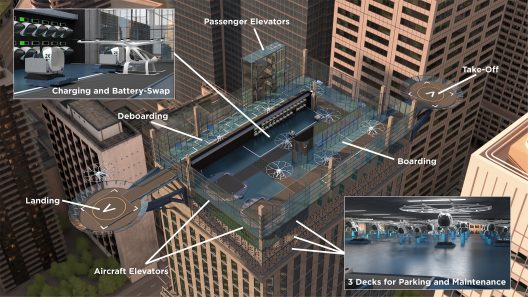 Architects will take on providing spaces for Volocopters, ala Uber’s recent competition 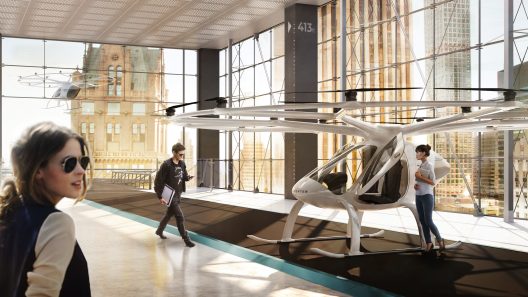 With a safe range “just under” 30 kilometers (18.6 miles), the Volocopter is well-suited to inner-city flights.  Worries about micro turbulence around tall buildings can be offset because of its drone-like ability to handle gusts “thus offering a smooth ride for passengers.”  Since Singapore is an island about 16 by 27 miles, it’s sized right for such testing, too.

Its data sheet shows a noise level of 65 dB (A) at 75 meters (246 feet), less than the typical background noise of a city.  Usually, Volocopters will fly at 100 meters (328 feet) or more, eliminating their aural presence.  The visual aspects will be more spectacular as the 2X’s wend their way through Singapore’s towering architecture.

One person who will oversee these flights has a positive outlook already.  Mr. Ho Yuen Sang, Director  for the Aviation Industry, CAAS, says, “There is potential for air taxis, or eVTOLs, to transform mobility and logistics in urban cities. Volocopter is at the forefront of such new and innovative technology in the aviation industry. CAAS is pleased to work together with Volocopter to study the technical capabilities and develop appropriate operational guidelines to facilitate such trials in Singapore.”

Volocopter envisions launch platforms on large buildings. Will this be plausible or problematic?

Mr. Tan Kong Hwee, Executive Director of the Economic Development Board (EDB) of  Singapore adds, “Volocopter’s decision to set up a local product design and engineering team in Singapore is a testament to Singapore’s aerospace engineering talent, as well as our prime position for industry players. We are excited to welcome Volocopter to Singapore and look forward to our future partnerships.”

Florian Reuter, CEO of Volocopter explains, “We are getting ready to start implementing the first fixed routes in cities.  Singapore is a logical partner: The city is a true pioneer in technology and city development. We are confident this is another exciting step to make air taxi services a reality.”

With a preliminary permit to fly in Germany since 2016, Volocopter is cooperating with the European Aviation Safety Authority (EASA) to receive a full commercial license.  Various Volocopter models have flown both indoors and out in its home country, and with public flights there and in Dubai, are competing with eHang and others to be the first sky taxis in several locations worldwide.  This could become a thing, as the young are apt to say.