Howard Handelman, a regular reader and observant critic of the CAFE Blog, and Patrick Panzera of Contact magazine fame, are soliciting support for an effort to help John McGinnis finish his Synergy aircraft, unfortunately unable to make its Green Flight Challenge date, but nearing the finish line, none the less.

Kickstarter.com recently rejected John’s attempt to raise funds for the nearly complete aircraft, a radically new and somewhat controversial approach to obtaining high performance on relatively low power.  John has shared his insights into the aerodynamics of the project and invited a lively discussion (now closed) on the Experimental Aircraft Association’s forums pages. 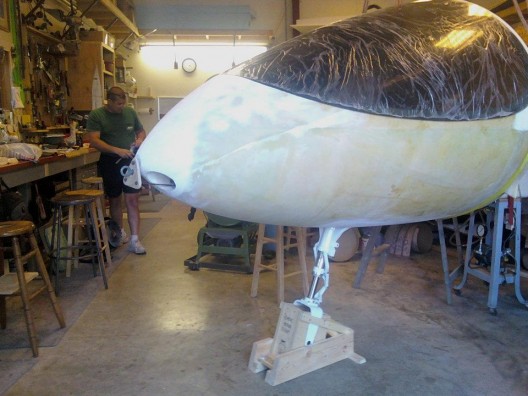 Synergy under construction – an imposing sight

The Internet has made possible fund-raising “crowd sourcing” in which interested people all over the world can contribute to enterprises they feel worthy of support.  As Handelman explains, “Keep in mind that Gates, Jobs and Rutan started in the equivalent of their garages.  Then remember the pre-internet crowd funding of the Voyager’s record-setting trip around the world 25 years ago. Did you miss your chance to be a part of that like I did?”  (Your editor did not, drawing from his meager resources at that time to contribute the equivalent of about five gallons of fuel, which of course were those that got Voyager over the finish line.)

Handelman and Panzera are coordinating an alternative to more formal crowd sourcing, “HandPropper,” with Panzera yelling “Contact,” of course. 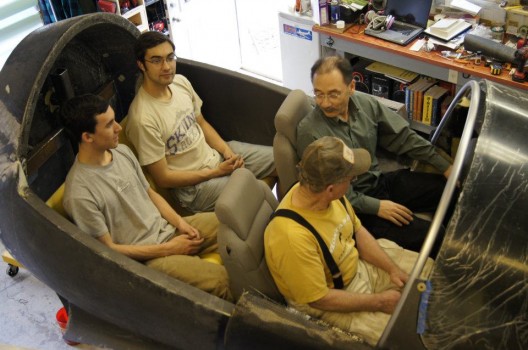 John McGinnis, in the pilot's seat, takes some friends of Synergy for an imaginary ride

Handelman explains how those interested can donate to the cause, and receive some nifty swag in return.  Donors can go directly to SynergyAircraft.com and click on the donate button.

Handelman, a serious and enthusiastic supporter of the project, will administer the “tokens of appreciation” for donations from $10 and up.

Tokens include a signed, limited edition, color postcard to your snail mail address for donations of $10 or more, a limited edition Synergy mug for $25 or more, a Sponsor edition Synergy T-shirt for $50 or more; a Synergy hat and your name on the airplane and priority in line to ride in it for $100 or more.  Handelman wants donors to hang on their hats – “the hat is your credential.” 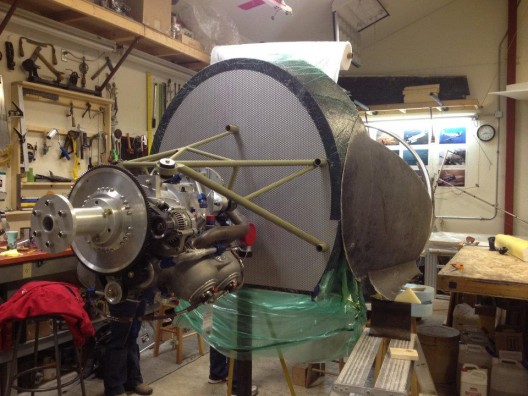 For donations of $250 or more, donors will get a VIP swag bag, a ride and the chance to fly Synergy (with supervision, of course).  The prizes are cumulative, so donors could end up with an appreciable pile of very exclusive gear.

$500 and up gets donors to the Team Synergy Bronze sponsorship level, which includes all of the above plus additional benefits to be public later. Greater gift qualify the donor for grander prizes.

Handelman promises one added bonus for early contributors.  Up to a pre-set limit which he and John McGinnis have established, Handelman will kick in $25 for every donation of $100 or more – a  generous matching gift.

Readers can contact Howard Handelman at  Friends of Synergy or see more details about the HandPropper effort at his web site.   Contact Magazine has additional details about this supportive program.