A professor and student at the Technical Superior School of Industrial Engineering and Aeronautics of Terrassa (ETSEIAT), part of the Politechnical University of Catalonia (UPC), have unveiled a radio-controlled car that runs on aluminum soda pop can rings, water and vinegar. 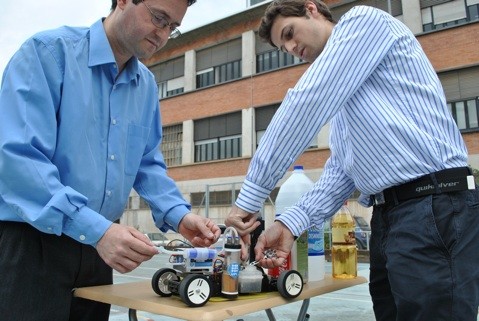 Is that a bottle of vinegar in the background?

Professor Xavier Salueña and his student, Aleix Llovet, held an April 14 press conference concerning dAlH2Orean, part of the project called “Aluminium,” for the manufacturing of micro cars with 5-60 horsepower using recycled aluminum as their primary fuel.  The miniature vehicle’s propulsion system has been patented.  The car can run on aluminum soda (or beer) can rings, “or residual parts of aluminum with hydroxide of sodium (which acts as a catalyst) dissolved in water,” according to its developers.  “The whole operation is based on the self-generation of hydrogen created by the reaction between aluminum and sodium hydroxide.  This self-generated hydrogen feeds the fuel cell that produces the energy,” according to the team’s press release.

“The residue of aluminum and sodium hydroxide dissolved in water are placed inside the [car’s tank]. The aluminum reacts with sodium hydroxide and generates hydrogen, which is filtered through a vinegar filter with water to remove traces of hydroxides. The hydrogen passes to another filter containing silica gel ball where it loses moisture to enhance its performance. Finally, hydrogen reaches the stack generating electricity through a membrane that separates electrons from the protons until they meet again in an environment of oxygen, producing water, and energy that powers the engine.”

Professor Salueña and Llovet further explain that, “This system is absolutely clean, it does not generate C02 emissions and closes the cycle of aluminum, reducing pollution caused by its extraction, the use of aluminum is because it is a residual and when…in contact with sodium hydroxide produces hydrogen and aluminum hydroxide and sodium hydroxide, which can be reused. The aluminum hydroxide can be converted in alumina throughout a calcination process. With the alumina, aluminum can be obtained, in this case is more pure than the aluminum [that] is currently recycled, and the same purity which is extracted from [mined] bauxite, which is very dangerous for the environment. Moreover, the only residue that occurs within the filter vinegar, which react with traces of sodium hydroxide, is salt water is the same type that gives flavor to the bag of crisps (sodium acetate).”

They note the comparison to the DeLorean featured the Back to the Future film series, in which Doc Brown and Marty McFly toss garbage and a soda can into the car’s fusion reactor  The dAIH2Orean reaches only 30 kilometers per hour (18.6 miles per hour), although if scaled up to a normal vehicle’s size, might travel at supercar velocities.  It can maintain that top speed for 40 minutes, according to the inventors.

This hints at a high energy density for this setup, which is borne out by testimony from researchers at the Department of Mechanical Engineering at the UPC Campus Terrassa and the Department of Chemical Engineering.  They have calculated that “to move a vehicle [of] about five horsepower for an hour would take about three kilograms of aluminum and about 30 kilograms for a 60 horsepower engine, slightly more than the equivalent amount in the same weight [of a] car powered by gasoline.”  This makes the technology highly applicable for powering aircraft, and provides a non-polluting, readily available source of recyclable aluminum – its own waste – which then becomes part of a cycle that theoretically could be endless.

They admit that that they need to devise an easy way to refuel full-scale vehicles, and “are in contact with several companies to study the feasibility of the project.”

Salueña and Llovet claim their new system can be produced in model size for “around 800 Euros ($1,152).  How much this would “scale up” in price with a similar scaling up in vehicle size is not discussed.

The pair see educational benefits in their efforts, since, “The car is an object and a perfect example to explain how the fuel cell works, or, closing the cycle of materials and fuels in order to manufacture vehicles fully sustainable and friendly [to the] environment.