No, that’s a statement and not a question.  Taja Boscarol of Pipistrel sent the following announcement this morning.  WATTsUP, their new two-seat electric trainer took its maiden flight on August 8th.  As part of its 25th anniversary celebrations, Pipistrel will display the airplane at the Salon de Blois airshow, France, on 30-31 August 2014. 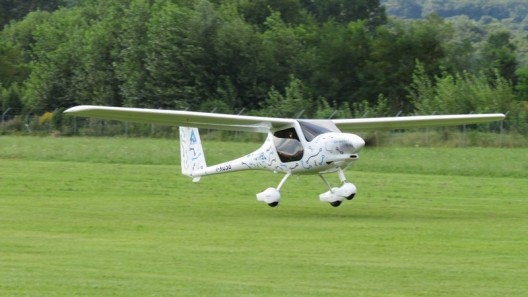 This is the third announcement of an electric trainer by a major aircraft manufacturer, counting Airbus with its anticipated e-Fan developments and American Electric Aircraft Corporation (AEAC) with its Sun Flyer.  We could count four with Adventure Aircraft’s EMG-6 under development in California for the ultralight market.  This would mark a potentially historic turnaround for General Aviation, with promised operating costs significantly lower than for internal-combustion powered machines, and by inference, lower rental costs for student pilots.

One of the most exciting parts of the announcement – the price: “Pipistrel expects to bring the final product to the market in 2015 with a target price below 100,000 EUR ($135,000),” according to their press release. Sun Flyer and e-Fans are also expected to be within the upper range of Light Sport Aircraft prices, making for a potentially competitive and technologically rich new market segment.

Siemens, a partner in the endeavor, may also supply the electric motor and other components for the Hypstair (anyone notice a Slovenian tendency to pun?), the hybrid version of the Pipistrel Panthera.  With two motors in the 85 kilowatt (114 horsepower) and 150 kW (201 hp. continuous) ranges, Siemens seems dedicated to becoming a participant in this new area.   The 85 kW motor weighs only 14 kilograms (30.8 pounds), more powerful and much lighter than the Rotax 912 series engines typically found on microlights and LSAs.  It’s heartening that the motor is being built by Siemens, 53rd on the Forbes’ list of the Global 2,000 companies.  For comparison, General Motors is 67th on the list. 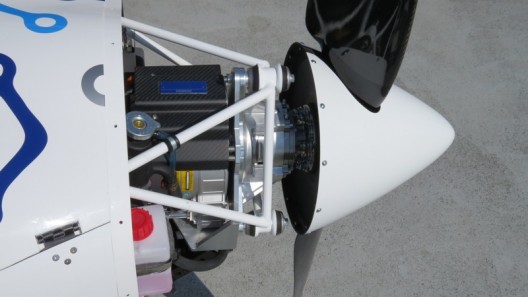 Siemens 85 kW motor takes up little space under the cowling

Much of that weight savings will be offset by the 17-kilowatt-hour battery, a “dual-redundant” package that can be swapped in a few minutes or recharged in less than an hour, “thanks to the next generation of Pipistrel’s Battery Management technology.”  The motor/battery combination will give an hour’s endurance with a 30-minute reserve.  Tailored for flight schools, WATTsUP will take off quickly, climb at over 1000 feet-per-minute, and, it’s claimed, recover 13 percent of the energy from every approach.  Tine Tomazic, the company’s Chief Designer, emphasized at last year’s Electric Aircraft Symposium that regeneration would depend on a steep descent and a special training regimen for students learning in the electric trainer. 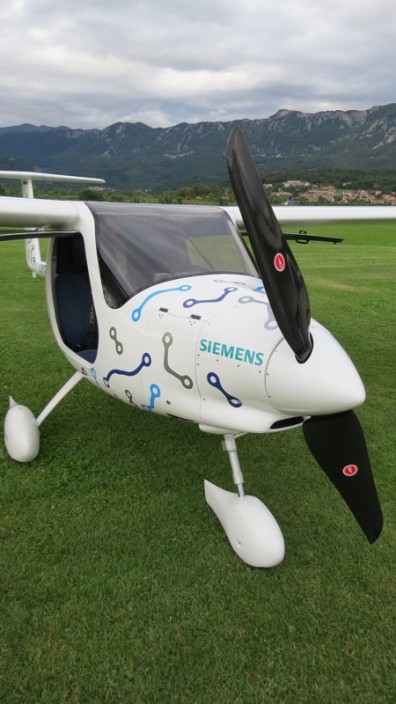 Propeller on WATTsUP seems to follow design concepts of Jack Norris, who holds 50 NASA patents, may contribute to regeneration on approach

Because it’s based on existing Pipistrel airframes, Ivo Boscarol, CEO of Pipistrel, may be correct in saying: “With the ever growing cost of fuel it is time to rethink pilot training. Our solution is the first practical all-electric trainer!”  As do AEAC and Airbus, he advocates the economy of operation for the craft.  “Technologies developed specially for this aircraft cut the cost of ab-initio pilot training by as much as 70 percent, making flying more affordable than ever before. Being able to conduct training on smaller airfields closer to towns with zero C02 emissions and minimum noise is also a game changer! WATTsUP meets microlight and ASTM LSA criteria, as well as standards for electric propulsion and is already certified in France. More countries will follow soon and we are applying for an exemption with the FAA to allow training operations as an S-LSA. WATTsUP is our 5th electric aircraft project and the second to result in a commercial product.”

Frank Anton, Executive Vice President Traction Drives, Large Drives, Siemens AG is quoted as saying: “Siemens is developing electric drive systems with highest power-to-weight ratio for aircraft propulsion. Only with innovation we can solve the problems of rising fuel costs, rising passenger demand and rising environmental regulations.  Innovations used in the WATTsUP will be instrumental in making aviation more sustainable in the long run. As electric drives are scalable, we can expect that in the future also larger aircraft will use electric propulsion. The world is becoming electric, whether in the air, on land or at sea.”