With one hop to go in its journey, Solar Impulse has spread the message of what might be if we have the will to overcome the inertia brought about by our well-lobbied legislature. Andre Borschberg and Bertrand Piccard have one more opportunity to challenge the world to adopt green energy when Solar Impulse goes to New York City.

Monday, they met with Energy Secretary Ernest Moniz, with whom they participated in an energy roundtable and news conference about the technology that made their flight possible.  Doubtless, they shared their mission’s primary object, furthering the global “Clean Generation” initiative – “a movement of likeminded people ready for change; ready for greater investment in technological innovation for a cleaner future.”

As the partners explain on their web site, “Welcome… to everyone ready to re-question their technological, economic, political and psychological certainties.”

An extraordinary voyage, only the second to use solar power to fly across the United States in 23 years (Erik Raymond did it in 21 days in 1990), Solar Impulse’s trip took expert meteorological and flight planning, often dodging destructive weather and waiting out turbulence and high winds. 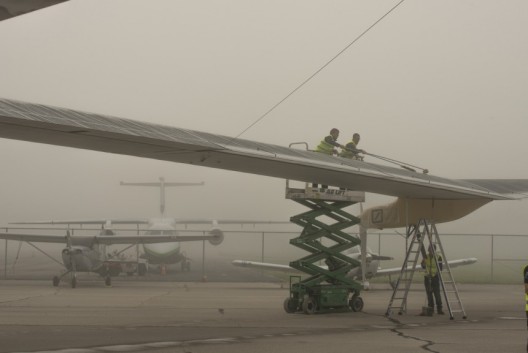 That high adventure captures the public interest for a few days, but the serious intent behind the mission may be an adventure in new thinking, and that can cause greater trepidation than a physical challenge. 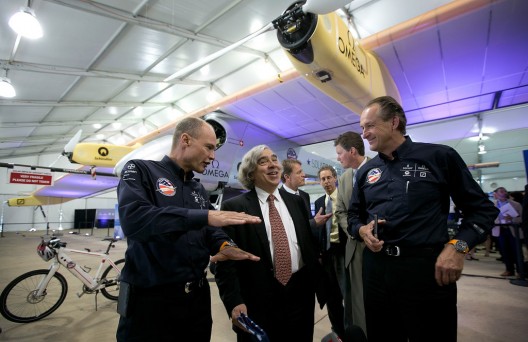 The partners discuss their underlying motivations.  “The public, which gets excited about great adventures, is ready to join the dreams of pioneers and explorers. Solar Impulse wants to mobilize this enthusiasm in favor of technologies that will allow decreased dependence on fossil fuels and induce positive emotions about renewable energies.

“Public attention must be drawn towards the changes necessary to ensure our planet’s energy and ecological future. Also, a positive and stimulating image of environmental protection must demonstrate that the alternative energy sources, related to new technologies, can achieve what some consider impossible.

“Since the ecological movement appeared on the scene in the 1970s, an irreconcilable conflict has divided those who want to protect nature, and who call for reductions in mobility, comfort and growth, from those in business and industry who defend people’s employment and purchasing power. Today, for the first time, this gulf is capable of being bridged, and the answer is clean technology. At last, technologies exits which can simultaneously protect the environment in a cost-effective manner and bring profits to companies.

“The problem with our society is that, despite all the grand talk about sustainable development, we are a long way from making use of the clean technologies that are already available to us. Every hour, our world consumes around a million tons of petrol, not to mention other fossil fuels, spits back out into the atmosphere enough polluting emissions to disrupt the climate, and leaves half of the population stagnating in totally unacceptable living conditions. And yet, everything could already be so different…

“Until now, renewable energies, often monopolized by fringe political parties, have lacked really dynamic promotional and marketing impetus. The ecologists will only be able to make their voices heard if they speak the same language as those whom they wish to convince. It is now urgent to leave behind the division that has led nowhere for 40 years, in order to finally unite ecology with the economy, environment with finance, and an overall vision with short-term political interest. 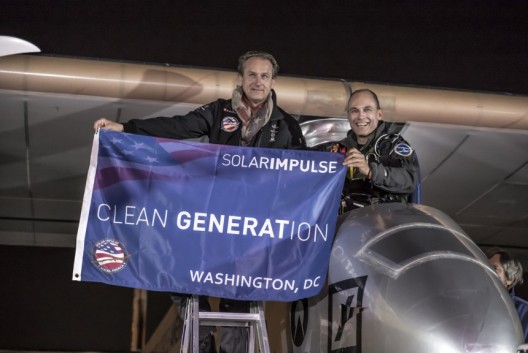 Andre’ Borschberg and Bertrand Piccard display their flag, which flew with the airplane for the entire mission.   Solar Impulse |Revillard

“It certainly seems that if sustainable development has difficulty in becoming a reality, it is because it is still more often than not associated with crippling costs and a restriction of comfort or mobility. It is this idea that has to be corrected. Indeed, even if our behavior risks destroying the planet, nobody seems ready to sacrifice his standard of living. Our grandchildren will no doubt end their days without oil and they will then call us the ‘plunderers of precious resources’, but as human beings, we are generally more motivated by our personal, short-term interest than by long-term empathy for our peers or our environment.

“’Since we cannot change the character of the human being, let us make an effort to adapt to the way he functions. Let us try to give him a personal interest to get into the way of thinking in terms of sustainable development. Let us prove that we are dealing here with an enormous new market with all sorts of economic and political outlets for those who understand how to invest in it in time. Let us point out the scientific interests, favor the pioneering spirit, let us promote a new fashion, in the positive sense of the word, which will enable renewable energy users to be held in admiration. We should not try to force the population to follow the path outlined at Rio or Kyoto against its will, but let us give priority to those who invent or use new technologies that respect the environment. It could quickly become out of fashion, even frowned upon, to consume too much petrol, to heat or cool down private or public places for no good reason or to consume non-recyclable products.’”

Whether enlightened self interest, monetary considerations, or spiritual redemption bring about these changes, they will have profound effects on our planet.  Thank you to Andre’ Borschberg, Bertrand Piccard, the creators of Solar Impulse and those who went before for showing us a small gateway to that better world.