Richard Kaner and Maher El-Kady have “micro-scale graphene-based supercapacitors” on their front DVD burner, showing an energetic alternative to saving all those ‘80’s rockers to disc.

Dr. Kaner is a member of the California NanoSystems Institute at the University of California at Los Angeles (UCLA) and professor of chemistry and biochemistry.  He and graduate student El-Kady are using a “consumer grade” LightScribe DVD burner to make dozens of micro supercapacitors on what looks like a typical DVD. 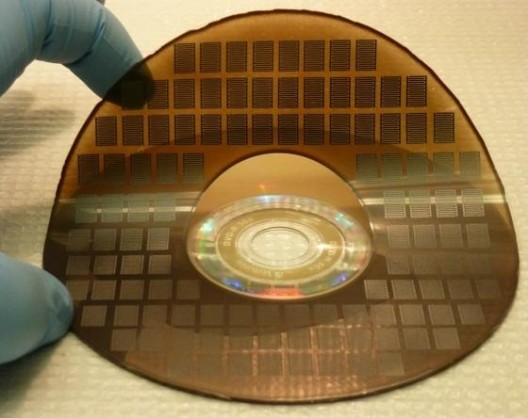 An abstract for their recent article in Nature Communications hints at the possibilities this research may realize in the commercial world. “The rapid development of miniaturized electronic devices has increased the demand for compact on-chip energy storage. Microscale supercapacitors have great potential to complement or replace batteries and electrolytic capacitors in a variety of applications. However, conventional micro-fabrication techniques have proven to be cumbersome in building cost-effective micro-devices, thus limiting their widespread application. Here we demonstrate a scalable fabrication of graphene micro-supercapacitors over large areas by direct laser writing on graphite oxide films using a standard LightScribe DVD burner. More than 100 micro-supercapacitors can be produced on a single disc in 30 min or less. The devices are built on flexible substrates for flexible electronics and on-chip uses that can be integrated with MEMS (micro electro-mechanical systems) or CMOS (complementary metal-oxide-semiconductor) in a single chip. Remarkably, miniaturizing the devices to the microscale results in enhanced charge-storage capacity and rate capability. These micro-supercapacitors demonstrate a power density of ~200 W cm−3, which is among the highest values achieved for any supercapacitor.”

Photonics Spectra queried El-Kady about the origins of this finding, telling the on-line publication, “At the early stages of this research, we invented the method of converting graphite oxide to graphene using the LightScribe DVD drives found in our computers.  Microscopic analysis showed that the produced graphene is well exfoliated without any sticking together.”

“’Additionally, the electrical conductivity of this graphene, which is another key factor for high-power supercapacitors, was very decent. We thought this could be the perfect material for making high-performance supercapacitors.’”

He showed the potential for the device by lighting an LED and demonstrating that to Professor Kaner, as shown on the video.

According to Photonics Spectra, El-Kady was anxious enough to try his idea that he used 10-year-old electrolyte he found in the lab to make his demonstration devices.  Using other, probably fresher electrolytes, El-Kady found the supercapacitor had not only the high power density common to capacitors, but also the high energy density common to some batteries.

A few other aspects of the micro-supercapacitor are of interest for possible future use in aircraft.  First, these devices use a polymer gelled electrolyte, which avoids problems electrolyte leaks and fire hazards possible with liquid electrolytes.  Second, tests of the devices’ flexibility and ability to stand mechanical stresses demonstrated their ability to function despite repeated strain and to actually store more of a charge following the tests.

Using a new structural design that uses two separated electrodes positioned to maximize available surface area between them, Kaner and El-Kady created a supercapacitor that holds a greater charge and is compatible with other micro circuitry.

They also found their LightScribe fabrication technique turned the graphite oxide with which they coated the disc into graphene as it absorbed the highly-focused laser light.  Researchers noted, “With the precision of the laser, the drive renders the computer-designed pattern onto the graphite oxide film to produce the desired graphene circuits.”

“”The process is straightforward, cost-effective and can be done at home,’ El-Kady said. ‘One only needs a DVD burner and graphite oxide dispersion in water, which is commercially available at a moderate cost.””  Does this mean we’ll see a future with home-built batteries and solar cells?

UCLA’s press release explains, “As they can be directly integrated on-chip, these micro-supercapacitors may help to better extract energy from solar, mechanical and thermal sources and thus make more efficient self-powered systems. They could also be fabricated on the backside of solar cells in both portable devices and rooftop installations to store power generated during the day for use after sundown, helping to provide electricity around the clock when connection to the grid is not possible.”  Think of a Sunseeker or Solar Impulse with thin-film solar cells backed with micro-supercapacitors.

The research group is sorting out possible commercialization of the process and the resulting devices.

Maher El-Kady will present an update on this exciting technology, “The Promise of Laser Scribed Graphene Super-Capacitors,” at the 7th Annual CAFE Electric Aircraft Symposium (EAS VII), April 26, 27 of 2013.  Held at the Flamingo Resort in Santa Rosa, California, the Symposium has an outstanding faculty and full agenda of exciting topics.