One team has reached its destination, although belatedly, and another is closing on its goal as two electrically-powered epic journeys reach their final hours.

Vislab’s orange Piaggio vans and their retinue of support vehicles entered Shanghai, China on October 28, 18 days after their anticipated arrival date; and the Racing Green Endurance (RGE) team from Imperial College London has passed from Chile into Argentina on its home stretch to Ushuaia, the southernmost city in the world.

Vislab’s goal of testing autonomous vehicles on the two-continent expedition, with the possibility of one day establishing a modern silk road from Italy to China and applying lessons learned from this journey to making everyday driving safer, had its share of problems, but the expert team managed to overcome these and press ahead in grand adventure style. 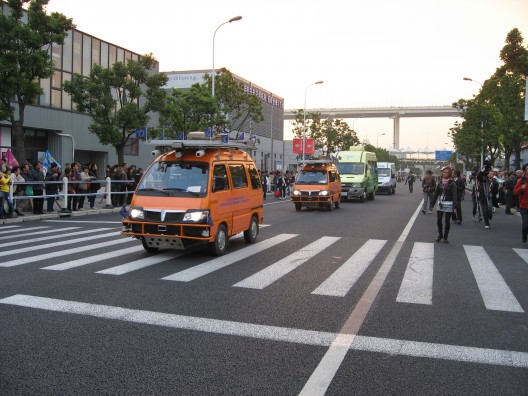 Vislab's entry into Shanghai on October 28

Their press release marks the notable accomplishment.  “The first intercontinental expedition in history composed of driverless vehicles left Parma (Italy) last June 26 and, after traveling for more than 15.000 km, reached its final destination: the 2010 World Expo in Shanghai, China. VisLab’s technology, installed on 4 electric vehicles, allowed to test –in an extensive way- the technologies of future intelligent vehicles.  “Within a project partly funded by the European Research Council (ERC), University of Parma’s VisLab –one of the key laboratories in the world in the development of driving assistance systems and autonomous driving- equipped 4 vehicles with autonomous driving systems with the aim to test their performance in extreme conditions. VisLab has been designing onboard electronic systems to increment road safety for more than 15 years, and this experiment –unique in the history of mobility and robotics- allowed to collect a huge amount of data (about 50 terabytes) to further improve the efficiency of those systems.” 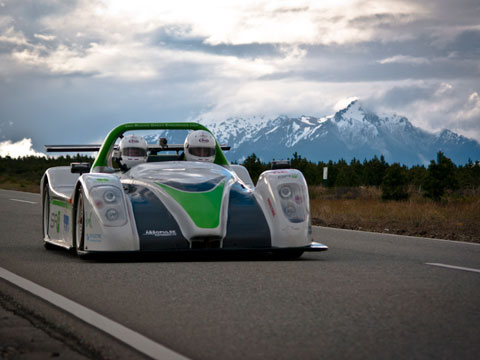 RGE’s team has traversed most of the Pan-American Highway during the past 65 days, and despite serious mechanical and electrical problems along the way, has managed to maintain an optimistic outlook.  Their LeMans-style vehicle draws attention wherever it goes, and certainly seems a bit out of place in many of the less developed areas through which it drives.

Perhaps a bit homesick, Alexander Schey noted the similarities of the local environment to his native turf on day 63.  “Today marked our final complete leg in Chile with a 410km drive to Osorno, and we started out the drive at 9am amid bright sunlight and blue skies. But after about 150km, the weather had completely changed; it was cold, overcast, grey and raining; it felt like England! Even the lush green vegetation was reminiscent of northern Europe, and several parts of the drive could very well have been in the English countryside.”

One surprising aspect of the pictures shared by RGE is the good repair of the roads, even in these remote areas.  If good luck and good roads hold, the Imperial College crew should see Ushuaia within days.

As noted before, the technologies involved in both projects are applicable to the green aviation we hope to see in the near future.  These teams’ successes will help bring that hope to fruition.