This blog has been following two intrepid groups exploring new geographical and technical terrain.  Both have been slowed by mechanical difficulties and sometime bureaucratic entanglements, but are making up for lost time.

London’s Imperial College Racing Green Endurance (RGE) team is driving an electric supercar from Prudhoe Bay, Alaska to Ushuaia, the world’s most southernmost city.  Their trek down the Pan-American Highway is about 70-percent done and mobile again following their recent enforced layover in Quito, Ecuador.  They have been stopped 29 times by police in North, Central, and South America, with many stops more to satisfy the curiosity of the local gendarmes than to enforce repentance of  negligence toward the traffic code.  Their Thunder Sky batteries and EVO motors have been performing reliably, pushing the car 250 miles or more per day on their eventful voyage.  To make up for time lost in repairs, they are pressing on, as attested to in their latest Twitter tweet, “We are in Machala! 320 miles done today from Quito! Tmrw we’ll hit Peru…” 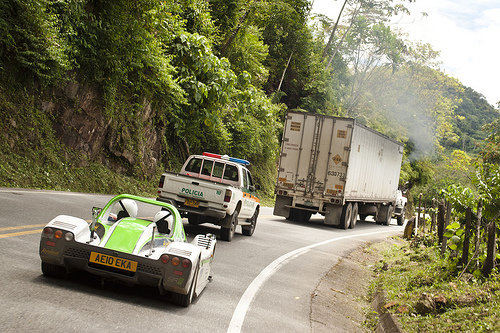 Vislab’s Intercontinental Autonomous Challenge to link Italy with China is 86-percent complete according to the project’s web site.  A test of autonomous automotive technology, the Challenge fields Piaggio vans, outfitted with the latest in sensors and navigation gear to drive through a wide variety of roads and off-road conditions.  China has imposed restrictions on the team, quelling live broadcasts of progress, but videos are available of the latest adventures.

In August, for instance, a  lucky hitchhiker in Moscow made history of sorts by accepting a ride in the Project’s driverless vehicle.  We should all be so lucky – and happy.

We’ll continue to track progress for both groups as they near their goals.  Both exemplify aspects of what the CAFE Foundation hopes to accomplish in aircraft, enabling reliable electric propulsion and autonomous or computer-assisted flight.  These early efforts bode well for a green, safer future in transportation.