The report explains, “Electric vehicles such as the Mitsubishi Motor iMiEV, Nissan Leaf or Tesla Model S require between 16 and 85kWh of storage, with a total cost of $11,200 and $34,000, or around 25% of the total cost of the vehicle.  Battery pack prices for plug-in hybrid vehicles such as GM’s Volt are on average 67% higher in terms of $/kWh, than those for electric-only vehicles like Nissan’s Leaf. This higher price is mainly due to the greater power-to-energy performance required for plug-in hybrid vehicles.”

Bloomberg reported last year that battery manufacturing capacity exceeded demand by over 10 GigaWatt-hours (GWh), enough to power an additional 400,000 pure battery electric vehicles.  That surplus capacity was projected to rise to 17 GWh by the end of 2013.  Only 43,237 electric vehicles were sold in 2011, according to the report, but that number has grown over the last two years and continues to rise every month. 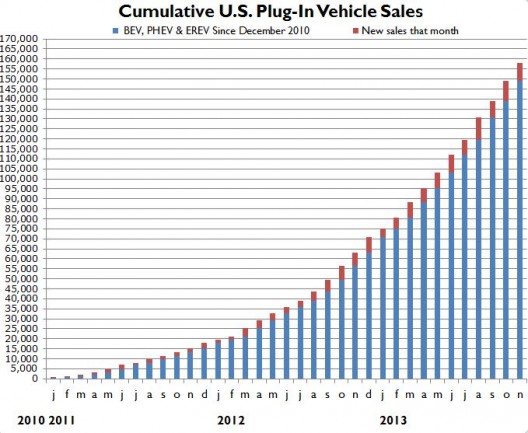 Elon Musk has predicted EV battery costs of $200 per kWh in the “not-too-distant future,” but that was in 2012.  Whether through policy-making initiatives, improved manufacturing techniques, or market forces, EV battery prices continue to drop as EV acceptance grows.

Beyond initial cost of purchase, the EV provides its owner with savings in operating costs, according to the Union of Concerned Scientists (UCS).  In 2012, the group completed a comprehensive survey of fuel and environmental costs of electric vehicles, and found that EV drivers can save $750 to $1,200 per year over fuel costs of an average (27 mph) gasoline vehicle.  The EV driver will save an additional $200 per year for every 50-cent rise in gasoline prices.

The UCS notes that putting solar panels on the house or garage will reduce operational costs further by providing “free” electricity for charging EVs, along with running the house.  Alan Soule, a CAFE Foundation board member, did just that.   A contractor, Alan powers his house and two Teslas (roadster and Model S) with sunshine.

To extend the service life of his car batteries, he is considering using the spent cells from his cars to store energy collected by his solar roof to power the house at night and through extended cloudy weather.  This is a solution Nissan proposes for Leaf buyers, along with ways to make the Leaf a backup power supply. 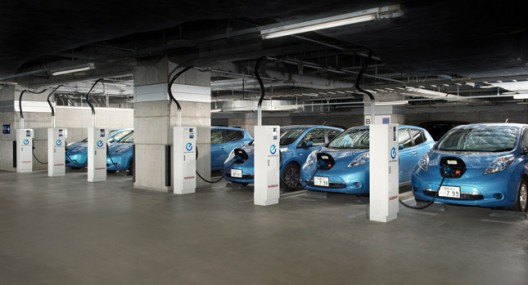 Leafs line up to power building, get recharged when electricity costs drop

At the Nissan Advanced Technology Center in Atsugi City, Japan, a “Vehicle-to-Building” program has saved operating costs for the Center since July.  Six employee-owned Leafs are plugged into the building’s power distribution system every work day and feed energy from their batteries into the building.

By phasing charging during “off-peak” hours, the cars can be recharged inexpensively, and will always be ready to drive home every evening.  But during high-cost periods for electricity, the Leafs supply power to the building.  According to Nissan, the building reduced outside power use 25.6 kilowatts during peak summer periods.  (It would be nice to know over what time.)  This gave a net 2.5-percent reduction in the use of outside power during peak hours, and a savings of 500,000 Yen ($4,864) per year.

Nissan claims the program had “no impact on the workers’ daily commute, or their vehicles.”  The first point seems reasonable, but the second begs the question of whether this increased cycling of the batteries reduces their lifetime usefulness in running up clean driving miles. 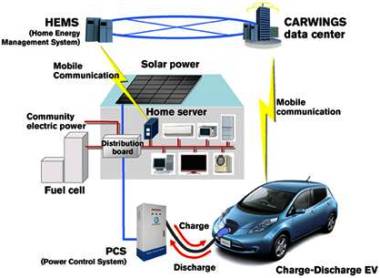 Nissan is continuing testing and refinement of the system, which is a development of their “Leaf-to-Home” system, similar to Alan Soule’s home-grown approach.  Balancing of external sources for electricity with the backup that electric vehicles can provide allow for reduced infrastructure and more efficient use of resources.  Either at home or on the job, such car/building interfaces could help provide power during an emergency.

Increased production and distribution of the systems from these cars will benefit the development of, and reduced costs for, components that will find use in future electric aircraft.  It’s a win-win-win situation.