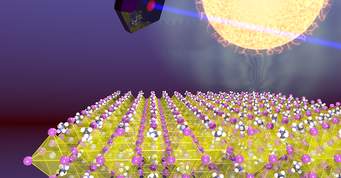 That may sound like a silly question, but thin-film solar cells are pushing the boundaries of lightness and efficiency that will make them viable candidates for use on aircraft.  Looking back at earlier achievements demonstrates the great things that can be done with limited resources.  Eric Raymond, for instance, made a solar-powered flight across the United States in 1990 on amorphous solar cells that were only about two percent efficient.

His Sunseeker Duo, which he flies around Italy and Switzerland with Irena, his wife and co-builder, has modern thin-film cells that are 23-percent efficient – a ten-fold gain.  Before that, the earliest two solar-powered flights were charged by big, round solar cells, not terribly efficient and lacking full coverage of a wing because of the gaps between cells.  Fred To in England and Larry Mauro in America did what they could with these disadvantages and managed successful, but short, flights after hours of charging small on-board batteries (also relatively inefficient). 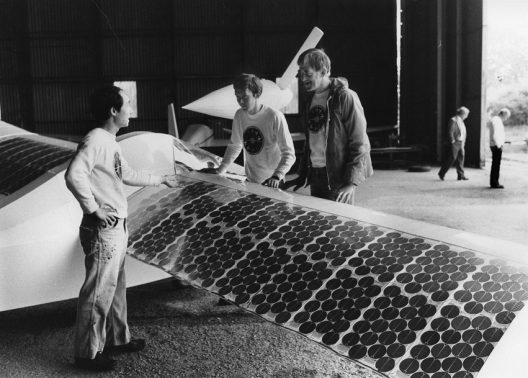 Fred To with Solar One and co-builder David Williams to right of wing. Note gaps in solar coverage with early circular cells.  Plane flew in December, 1978 Photo: courtesy Fred To

An entrepreneurial outing, Konarka tried but failed to bring solar cells that could be made on home ink-jet printers.  They dropped out around 2003, losing the market they had hoped to dominate.  Factory-sized roll-to-roll printing and improved cell design have made thin film solar cells serious contenders with modern solar-powered aircraft.  (The 2017 Sustainable Aviation Symposium will have Dr. Aarohi Vijh detailing his company’s approach.) Now Perovskites (calcium titanium oxide (CaTiO3), could lead to lower-cost thin film cells flexible enough to match an aerodynamic surface.

Now, according to a press release from the University of Toronto, “Post-doctoral researcher Hairen Tan and his colleagues in Professor Ted Sargent’s lab have removed a key barrier to the manufacture of low-cost perovskite solar cells.   Printing solar cells could become “as easy and inexpensive as printing a newspaper.”

Sargent explains, “Economies of scale have greatly reduced the cost of silicon manufacturing.  “Perovskite solar cells can enable us to use techniques already established in the printing industry to produce solar cells at very low cost. Potentially, perovskites and silicon cells can be married to improve efficiency further, but only with advances in low-temperature processes.”

Unlike most commercial solar cells made from crystalline silicon, the Toronto process avoids high temperatures and toxic solvents.  Instead, perovskite solar cells manufacture deposits, “A layer of tiny crystals – each about 1,000 times smaller than the width of a human hair – made of low-cost, light-sensitive materials.”  These can be mixed into a liquid “solar ink” that can be used in a simple inkjet process.

The video below shows where perovskite cells fall in efficiency, especially compared to the far more costly and complex triple-junction models.

Why have others missed the opportunity to include low-cost perovskites in their solar mix?  Something called an electron-selective layer, or ESL, that allows extraction of electrons from crystals so they can flow through a circuit, has held up progress.  High-temperature processing of an ESL-ready powder requires baking at 500 degrees Celsius (932 degrees Fahrenheit).  Tan points out, “You can’t put that on top of a sheet of flexible plastic or on a fully fabricated silicon cell — it will just melt”

The Toronto team grows an ESL made of nanoparticles in solution and deposits that directly on the electrode at temperatures below 150 degrees C (302 degrees F), “much lower than the melting point of many plastics.”  A layer of chlorine atoms helps bind the perovskite and ESL layers.  The resulting film has achieved an efficiency of 20.1 percent.  Their findings are published in the February 2, 2017 issue of Science.

Tan notes that “This is the best ever reported for low-temperature processing techniques,” adding that perovskite solar cells using the older, high-temperature method are only marginally better at 22.1 per cent, and even the best silicon solar cells can only reach 26.3 per cent.  Even better, the new cells are stable, retaining more than 90 percent of their efficiency after 500 hours of use, something not necessarily true for older perovskite technologies. 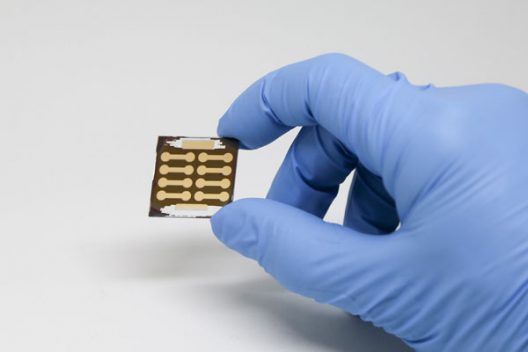 The new perovskite solar cells have achieved an efficiency of 20.1 per cent and can be manufactured at low temperatures, which reduces the cost and expands the number of possible applications. (Photo: Kevin Soobrian)

Professor Luping Yu of the University of Chicago’s Department of Chemistry thinks low-temperature processing is necessary to obtain ‘the best silicon solar cells.”  An expert on solution processing of solar cells, he was not involved in the Toronto research.  This cool approach promises other applications for perovskite solar cells, ranging from “smartphone covers that provide charging capabilities to solar-active tinted windows that offset building energy use.”

The processing technology might allow development of hybrid perovskite/silicon solar cells.  “With our low-temperature process, we could coat our perovskite cells directly on top of silicon without damaging the underlying material. If a hybrid perovskite-silicon cell can push the efficiency up to 30 per cent or higher, it makes solar power a much better economic proposition.”

A future for such materials might include the ability to print efficient solar cells on home devices.  Aircraft homebuilding might take on an even grander level when folks start crafting their own solar-powered wings.