In its introduction, Global Energy Transmission Corporation (GET) promises virtually indefinite flight for multi-rotor aircraft.  “GET re-invents [the] commercial drone industry providing [a] technical solution to power drones in 24×7 mode around dedicated area[s]. An electrically powered drone can recharge and fly indefinitely via efficient safe high power in-flight rapid recharging in a GET power hotspot. The company’s distance wireless charging technologies uniquely enable drone delivery and many other industrial applications.and many other industrial applications.”  This wireless charging concept goes back a long way.

In the film The Prestige, key parts center on visits to Nikola Tesla’s laboratory in upstate New York, where the tower that dominates the grounds was one of his dreams.  Although never completed in real life, images of its planned form captivated readers and promised endless supplies of electrical energy to the world – with power from Niagara Falls flowing to land and sea wirelessly. 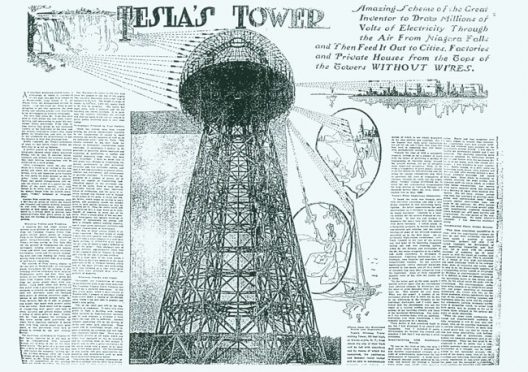 New York American, May 22, 1904: Tesla’s Tower – Amazing Scheme of the Great Inventor to Draw Millions of Volts of Electricity Through the Air From Niagara Falls and Then Feed It Out to Cities, Factories and Private Houses from the Tops of the Towers Without Wires.  Credit: The Tesla Society

Whether even the mighty Niagara could power the world (Tesla might have been forced to build additional towers at Victoria or Angel Falls, for instance), the idea of wireless transmission of energy has its adherents.  Lockheed Martin and a company called LaserMotive kept a fixed wing drone aloft for 48 hours by beaming laser-focused energy its way in 2012.  LaserMotive has recently changed its name to PowerLight Technologies, but continues its research in powering drones and other electrical devices remotely.

Today, another company offers a way to recharge aerial drones in flight.  “Global Energy Transmission Corporation (GET) Presents a new Distant Wireless Power Technology that can power industrial drones with a range of many meters from a safe, simple easy to install power transmission cord (energy transmitter).”  In fact, the company suggests that it can project energy over a mile, but apparently only if the cord is stretched that far.  “The key feature of the technology is a long length flexible transmission cord, which forms [an] area of energy reception with a distance of up to 20 meters from the transmission cord. The transmission cord can be much longer and reaching 100s of meters or even several miles!”

Awarded 3rd place in Technology innovation at the AUVSI (Association for Unmanned Vehicle Systems International) Xponential 2018 show, GET announced and revealed its systems at the event.  One can purchase a complete setup with an eight-meter diameter charging station and two very large drones as a starter set.  The drones are fairly hefty, weighing 8.2 kilograms (18 pounds) without batteries and spanning 160 centimeters (5.25 feet).

Because of their weight, each GET drone requires 1.55 kilowatts of electricity to stay aloft (at 13.6 kilograms or 29.9 pounds), giving the eight-rotor machine a hover time of 28 minutes.  That drops with increasing vehicle weight, of course, with a machine loaded to the maximum weight of 19.6 kilograms (43.12 pounds) being able to hover for only 16.2 minutes.  At a maximum cruise speed of 60 kilometers per hour (37.2 miles per hour), the fully-loaded drone can travel about 10 miles between charging stations.

hovering requires thrust equal to the weight of the multi-rotor vehicle, while a fixed wing aircraft uses only a fraction of that power to travel quickly with the same maximum weight.  This brings about the possibility of employing craft that would hover to recharge and move on in horizontal mode.  A network could then spread over a wider area with fewer charging stations.

Certainly, the principles at GET have found a way to recharge an aircraft wirelessly.  Future developments may see larger machines and even faster charging, with the possibility that long-range flights of people-sized payloads might be possible.  Tesla might be cheering this group on.